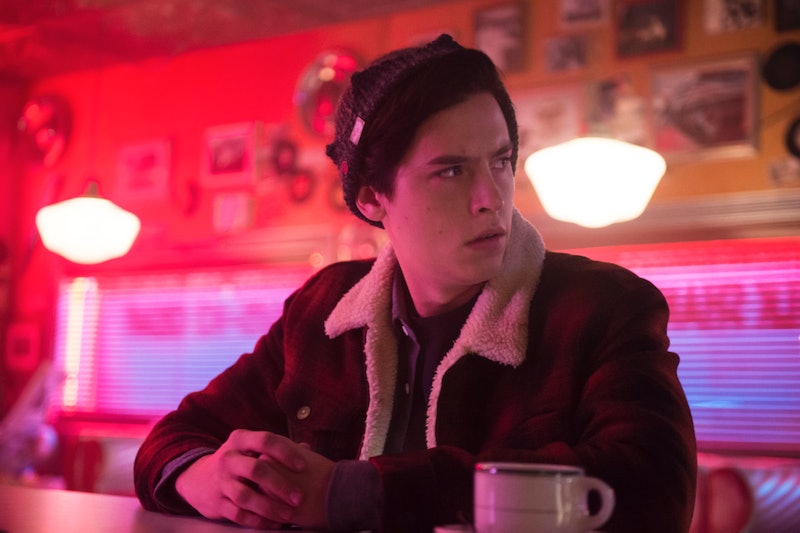 Spoilers for Wednesday's Riverdale. While it may have been difficult to keep track of the brawls on brawls on brawls this week on Riverdale, one thing is for certain: The consequences may be dire. Corpses are piling up, multiple Black Hoods are running wild, there's a fire, and a major character made a huge sacrifice. Is Jughead dead on Riverdale? Penny finally got her revenge, and it doesn't look good.

Say it ain't so — Cole Sprouse's character never even got to sing! He certainly seemed like he was prepared to die when he called Betty on the phone at the end of the episode, but his fate is uncertain. After striking a deal with Hiram Lodge and basically offering himself up as a lamb for the slaughter, F.P. Jones carried his limp, beaten, and cut up son out of the woods.

This is the work of Penny Peabody, who is basically Rufio from Hook at this point with the Ghoulies flanking her. Early in the episode, Penny threatened Toni Topaz — but Jug and Cheryl came to the rescue. There's a special place in hell for women who kidnap other women. She has teamed up with the other gang in town and wants the Serpents out of the trailer park so they they can run their jingle jangle hustle in peace.

Jughead doesn't want to go to war over a territory the Serpents no longer control, despite the fact that historically most wars are fought over a similar conflict. All of the other Serpents vote to rumble — including Cheryl Blossom? Sure. She's there.

Anyway, Jug also smells a rat by the name of Hiram Lodge. All of these gangs and disputes are converging a bit too conveniently, and Jughead puts together that Hiram paid the Ghoulies and Penny to get rid of the Serpents — and that's what lead to him showing up solo, cruisin' for a bruisin'.

Not only did they beat the tar out of him, but Penny also reclaimed her "pound of flesh" from his arm. Gross. Shakespearean and gross. Is he dead? It would be a huge shock to lose a character so central to Riverdale in the second season. Then, of course, there's this tweet from the show's creator earlier in the week:

That was enough to spark rumors and theories that Jughead was gonna kick the proverbial bucket amongst fans, but after having seen the episode surely that means he lives, right? The creator wouldn't spell it out like that, right? There are other deaths in the episode — Fangs is gone, and the unforgettable Small Fry, son of Papa Poutine, is killed by Hermione Lodge. Plus, you can survive your heart stopping. Many do.

Then again, earlier in 2018 Sprouse joked about Jughead dying on The Tonight Show — and basically all of his other "jokes" about Season 2 came true. “I’m riding a motorcycle and wielding a switch blade, which is something my little quivering Disney self never thought would happen, if I’m being quite honest about it,” he told Jimmy Fallon in the interview after deadpanning "I die" as a joke... allegedly. “I’m in the gang," he said. Check it out for yourself:

“The first half of the season has been us preparing for this impending and possible riot," Sprouse later added. "Much of Jughead’s narrative was him being positioned on either side of this and trying to mediate this. So the second half of the season is me in a leather jacket, with a comb, on a motorcycle, one foot on either side of this impending war.”

He's certainly stepped in it (the impending war) now, that's for sure. There's one episode left in the season. Hopefully Jughead pulls through — but anything can happen, and Riverdale fans may need to prepare for the worst.