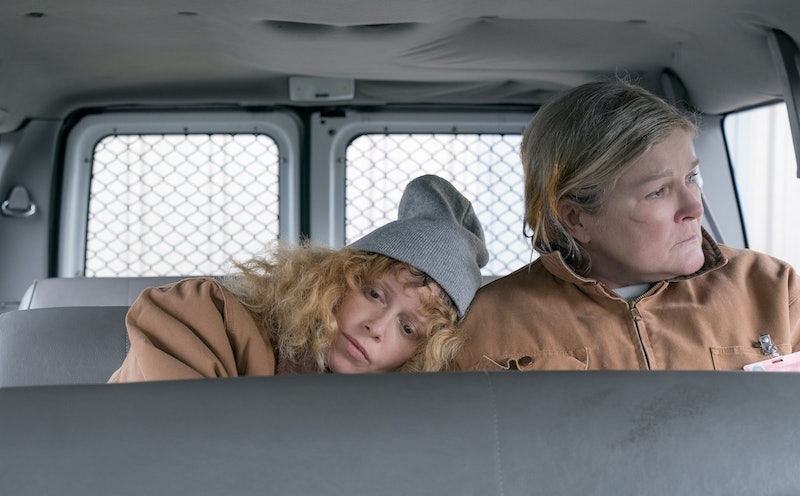 Spoilers ahead for Orange Is the New Black Season 7. Though she's always been as fiery as her nickname suggests, in Orange Is the New Black Season 7, Red isn't quite herself. She's forgetful and often confused, and though she tries her best to hide and deny it, Nicky knows there's something wrong. In Episode 10, her suspicions are confirmed: Red has early-onset dementia.

As noted by The National Institute on Aging, dementia is not a natural part of aging and occurs when there is damage to brain cells — in Red's case, because of her extended time in solitary confinement. At the end of Season 6, Red was sent to the security housing unit (SHU) after attacking Frieda, and in Season 7, she's still there. Gloria, who is in the neighboring cell, tries her best to keep Red's spirits up by engaging in conversation, but it doesn't work. Red is lethargic and forgetful, and her symptoms only worsen after she's released back into the prison's general population. Gloria encourages Red to lead the kitchen at the ICE detention facility in order to get her back into her regular routine. But when she begins making mistakes in the kitchen, Red resorts to anger and blames others.

Eventually, she severely cuts her finger and is taken to medical, where Nicky informs the staff that she has been having trouble remembering things and has been experiencing mood swings. The doctor diagnoses Red with dementia and informs her, "The rapid progression was probably caused by an acute case of delirium that began while you were isolated in the segregated housing unit." He says the delirium was also intensified by a severe urinary tract infection. And while he can treat the delirium, her mental state will continue to deteriorate to the point that she'll need daily assistance.

As is true with much of OITNB, this storyline has real-life implications: research shows solitary confinement can be extremely detrimental to mental health. As reported by Psychology Today, psychiatrist Dr. Stuart Grassian did a study that evaluated 14 people in solitary confinement and found they all experienced hypersensitivity, hallucinations, anxiety and panic attacks, paranoia, problems with impulse control, and problems with thinking, memory, and concentration. "In my opinion, solitary confinement — that is confinement of a prisoner alone in a cell for all or nearly all of the day, with minimal environmental stimulation and minimal opportunity for social interaction — can cause severe psychiatric harm," he concluded in his paper, Psychiatric Effects of Solitary Confinement.

Psychologist Dr. Craig Haney has also studied the effects of solitary confinement on mental health for decades. And while neither psychologist has made a direct connection between this type of isolation and dementia, Dr. Haney told FRONTLINE that some prisoners will deteriorate mentally while in solitary. "They have a difficult time exercising their cognitive capacities. They report decreases in the ability to concentrate or focus, memory deficits," Dr. Haney said.

Slowly, these findings have begun to be taken into consideration in some courts. "Canadian courts have now seen dozens of cases that consider the harms of solitary confinement," Lisa Kerr, a Faculty of Law assistant professor at Queen's University who has spoken out against the use of solitary confinement, tells Bustle. "In every single case that has seriously considered the issue, judges have accepted that solitary as it is practiced in our jails and prisons can have serious and long-lasting negative effects on physical and mental health."

Kerr also cited a case in which a murder prosecution was halted because of the damage done to the prisoner in solitary confinement. "His memory no longer functioned properly, rendering the prospect of a fair trial impossible," Kerr says. "Given these developments, continuing with solitary confinement is simply unacceptable‚ not only from the perspective of the human rights of the person subjected to it, but also to protect the integrity of the criminal justice system."

The mental damage that was done to Red in SHU can't be reversed, but it may be heartening to know that there are advocates trying to end this type of punishment. (Kerr noted that the Canadian government recently passed Bill C-83 which "aims to abolish solitary.")

Red's story ends with her and Morello in Litchfield's Florida cell block due to their mental health. They're not receiving the type of support they both need, but it should be a small comfort to OITNB fans to know they have each other.