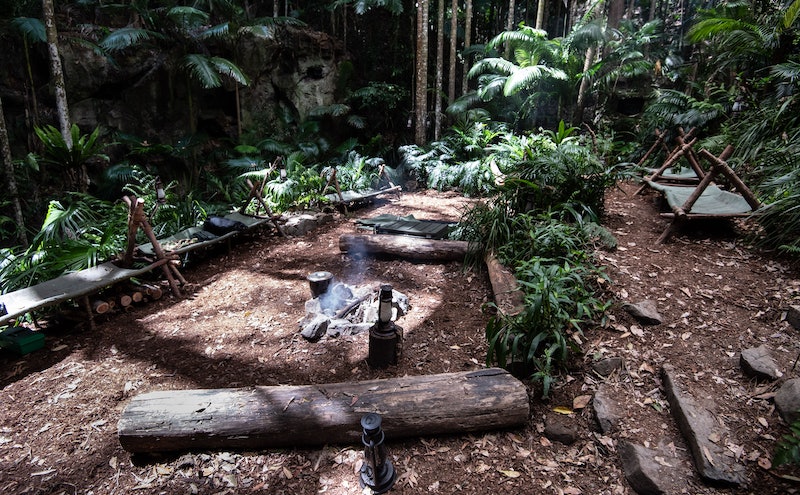 The bugs are busying themselves climbing up the trouser legs/nostrils of campers as we speak. Yes guys, it's that time of year again, I'm A Celebrity... Get Me Out Of Here is back on TV. And if you haven't noticed how flipping huge the set is, then are you watching the same show as me? Even the least observant of us all can't help but wonder — what happens to the camp after I'm A Celeb?

Well, the set, which is, like, redonk huge, isn't taken down at the end of every season. That would be bonkers. The whole area is pretty darn big so let me assure you, not even ITV wants to have to pay to put that up and take it down every year. Also, there is another version of the show shot in the camp after our beloved version. Yes, a representative of the show confirmed to me that "the German version of the show moves in" after all the Brit celebs leave.

Turns out, the show is a total hit with our German cousins, and word on the street is it's a lot racier than our version. According to the Metro, our version is positively prudish compared to the amount of nudity seen on the German one.

Last year, The Sun exposed a whole heap of photos from the camp, after the show is over. And guys, it is low-key apocalyptic vibes. The sets look so eerie and like a completely wild, abandoned place. The huge network of suspended bridges, platforms, and Bush Tucker sets look kinda scary. With lots of "do not enter" signs and all the various decorations taken down, its, well, a bit of a mess. Oh boy, does it look untidy. Wow, the cleaning crew must have had quite the flipping task on their hands. And in a country where brushing up leaves can end up with being bitten by any number of terrifying beasts.

The camp that the celebrities lay their heads in, is according to Capital, a disused banana plantation, set in Springbrook National Park in Murwillumbah, New South Wales. It is a UNESCO World Heritage Site, and a pretty stonking 15,310 acres. Now, obvi the I'm A Celeb crew don't own all of that space — that would be ridiculous — and there are lots of other camps and services in this enormous National Park.

But did you know, the jungle isn't actually a jungle? WHAT?! Yes, and the tooth fairy is also not real. Shivers. So, technically, it is a rainforest. And a rainforest that has a heck of a lot of totally cute places to stay. Places far more flash than the camp ranging from prices you can manage all the way up to prices not for the faint hearted.

But don't worry, all the comfy places are nice and far away, and despite many people being a little suspicious of the whole show, the contestants really do sleep in the camp. Former contestants have been shocked by the reality of the accommodation with Gemma Collins famously saying, "People who murder get treated better than this. That’s the truth. Even a murderer gets fed three times a day".

This year's contestant Harry Redknapp has also been a bit surprised by the actual sleeping and eating arrangements too, bemoaning the lack of coffee and bacon sandwiches.

As any true fans know, the best (by which I mean, lack of food and sleep) is absolutely yet to come on this season of I'm A Celeb. Can't wait.