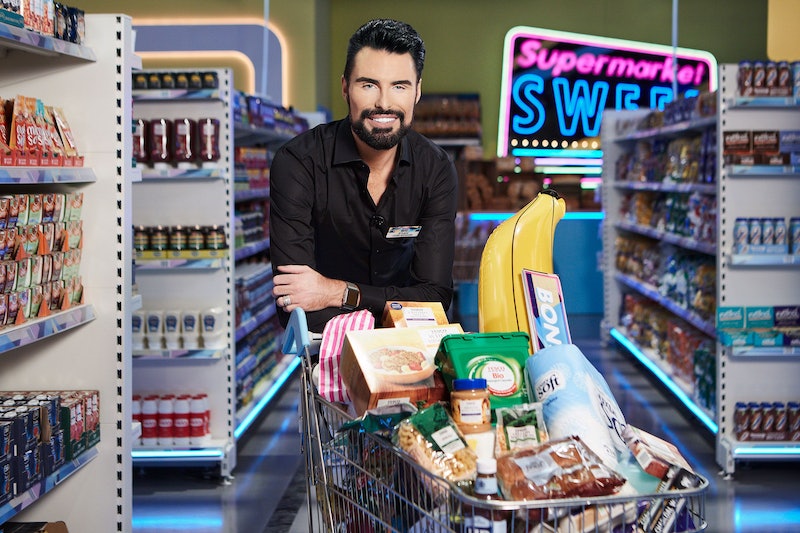 Reboots of old shows are ten a penny these days and for very good reason: because those shows were effing brilliant and everyone wants to watch them again. All the bright colours, the ridiculous challenges, and just plain old fun makes for top-shelf entertainment. Speaking of shelves, the shelves in the supermarket set of the all new Supermarket Sweep are positively heaving with food stuffs. It makes me hungry just thinking about it. But what happens to the leftover Supermarket Sweep food? Where does it all go? Is it wasted? Let's find out.

So, the reboot's host, Rylan Clark-Neal, revealed a few facts about the new show on his Twitter on Aug. 28 2019. In his tweet, Rylan let fans know that the inflatables and jumpers are back, that Jennie McAlpine will be the voice of the tannoy, and that the series would be 20 episodes long, among other details. All very exciting stuff. However, most exciting, and most important, of all, Rylan revealed all the leftover food will be donated to food banks every few days.

This fact comes as a huge relief. Not only will the show be helping people enjoy family viewing at home, but it will be helping food banks replenish their stocks and assist those in need. Something which is vital considering that a fifth of people living in the UK are living in poverty according to a study by the Joseph Rowntree Trust from 2017.

Food wastage is a huge issue around the world and here in the UK. So much so that, according to the BBC, an insane amount of what we buy ends up in landfill. "About a third of all the food produced in the UK or imported in to the country is wasted, according to scientists," the BBC reports. "Some seven million tonnes of that waste is created by households."

Lots of interesting campaigns, apps, and initiatives have been set up in order to tackle this horrendous issue, including Too Good To Go, which helps make sure that food goes into people's bellies instead of the bin.

There's also Olio. With this app, businesses, farmers, and even individuals who've got left over food can list whatever it is on the app and those in need can get have a chance of getting food that would otherwise end up in the skip. In only three years, the app's success has soared. According to the founder of the company Tessa Cook, who spoke to Bustle last year, the company has had not only a positive impact on reducing waste but on the environment too:

"Olio has grown to over 450,000 users who have together shared over half a million portions of food — which is the environmental equivalent of taking over 1.3 million car miles off the road."

With apps like this available and TV shows taking such an obvious stance on this situation, hopefully we're heading towards a far more sustainable future.

More like this
The Love Island 2022 Reunion Drama, Explained
By Sophie McEvoy
Brad Pitt Is A Huge Fan Of This British TV Show
By El Hunt
Fred Sirieix's Net Worth Is *Très* Magnifique
By Sam Ramsden
'Strictly' Just Added Three More Celebs To The Star-Studded 2022 Line-Up
By El Hunt and Sam Ramsden
Get The Very Best Of Bustle/UK