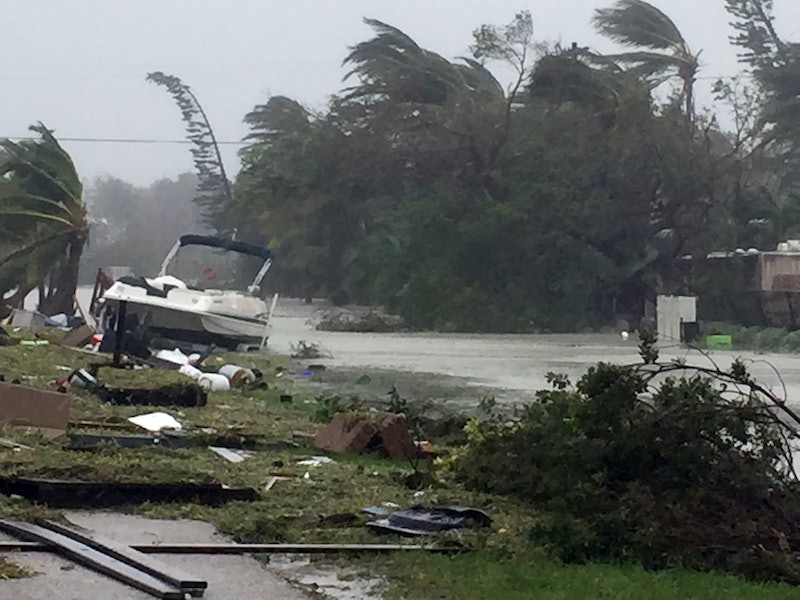 The one-two punch of Hurricane Harvey and Hurricane Irma over the past two weeks has been a reminder that hurricanes are life-threatening events — Hurricane Harvey was responsible for at least 70 deaths and so far Hurricane Irma caused 24 deaths before making landfall in the U.S.; the two storms also inflicted serious, non-life-threatening injuries on countless others. But while hurricanes are dangerous for all, they're particularly deadly for the elderly, the chronically ill, and the disabled — groups that are often neglected by the very people tasked with keeping them safe in the storm.

When an image of Texas nursing home residents trapped in elbow-deep water as they awaited rescue after Hurricane Harvey went viral, people were outraged. But what those people may not understand is that during hurricanes, for seniors and the disabled, situations like that are the rule, not the exception. After Hurricane Katrina, the AARP found that 73 percent of deaths in New Orleans were among people 60 and older (despite the fact they only made up 15 percent of the city’s population) and the National Council on Disability reported that while “[i]t is difficult to determine precisely what percentage of hurricane-related deaths were people with disabilities...it is clear that a disproportionate number of the fatalities were people with disabilities.”

It is too early to know the full toll that Hurricanes Harvey and Irma took on elderly, disabled, and chronically ill people; however, even though The Federal Emergency Management Agency (FEMA) established the Office of Disability Integration and Coordination in 2010 to make sure state disaster planning is inclusive of disabled people, anecdotal evidence shows that the needs of the disabled are not being prioritized during these recent hurricane evacuations.

For instance, during a news conference announcing mandatory evacuation for part of Manatee County, Florida, the American Sign Language interpreter who was supposed to convey the evacuation to the County’s Deaf and hard of hearing residents signed with 95 percent inaccuracy, according to Clemson University professor and ASL interpreter Jason Hurdich. Not only is having an unqualified sign language interpreter a violation of the Americans with Disabilities Act — Manatee County’s failure to secure a qualified ASL interpreter is a mistake that might have cost Deaf and hard of hearing residents their lives.

Erin, a woman living on the northeast coast of Florida, ran into problems when she and her family tried to evacuate. Her mother-in-law has end stage lung disease and requires oxygen to breath, but, Erin tells Bustle, "We were told by her home care company that they couldn’t give emergency tanks,” because they didn't have enough for all of their patients. Emergency tanks last for days, Erin notes — far longer than the few smalls tanks her family was able to take in their car as they evacuated.

Erin also worries about having access to the electricity needed to power her mother-in- law’s oxygen concentrator, both on the road and when the family returns home. “I’m nervous about when we’ll be able to return," she tells Bustle, "because apparently the flooding is really bad and it might be days before power is restored. I don’t know if we can find a generator.”

The Americans with Disabilities Act doesn’t yet have any specifications regarding natural disasters, though Nancy Lee Jones’ Congressional Research Service report states that that are nondiscrimination provisions in the Act that “are applicable to emergency preparedness and responses to disasters.” But in execution, this often isn’t true — when evacuation vehicles don’t have wheelchair lifts, or shelters don’t have enough electrical outlets for everyone’s medical equipment, disabled, elderly, and ill people are put into life-threatening situations after they manage to make it out of their homes.

"Our needs and concerns aren’t something we can discard just because our options are limited...And I know that no one can understand that until it’s their life 24-7.”

Erin, who is chronically ill herself, says what upsets her is “just the knowledge that our reality is so much different than [that of able-bodied people]. Our needs and concerns aren’t something we can discard just because our options are limited. We have to take into consideration everything we do. And I know that no one can understand that until it’s their life 24-7.”

But it doesn't have to be this way. Stanford Law School Assistant Professor Rabia Belt said,, in an interview with the Stanford law School blog, that “the key" to making sure disabled people are able to safely navigate emergencies "is to anticipate problems by including disability concerns in emergency plans when they are created, partnering with people with disabilities and disability advocacy groups, and pushing emergency management organizations such as the Red Cross to provide clear direction on what they are doing for the disability community.”

That’s why it is so crucial for communities to plan in advance and properly train people for when disasters strike. No one should be told there aren’t enough oxygen tanks for them, or anything similar, in an emergency — and if we begin working for change now, we can fight to keep it from happening again. Asking disabled people what their unique and diverse needs entail and opening that dialogue won’t necessarily improve current circumstances for the thousands presently devastated by hurricanes, but it could help ensure a better outcome for disabled people in the future.