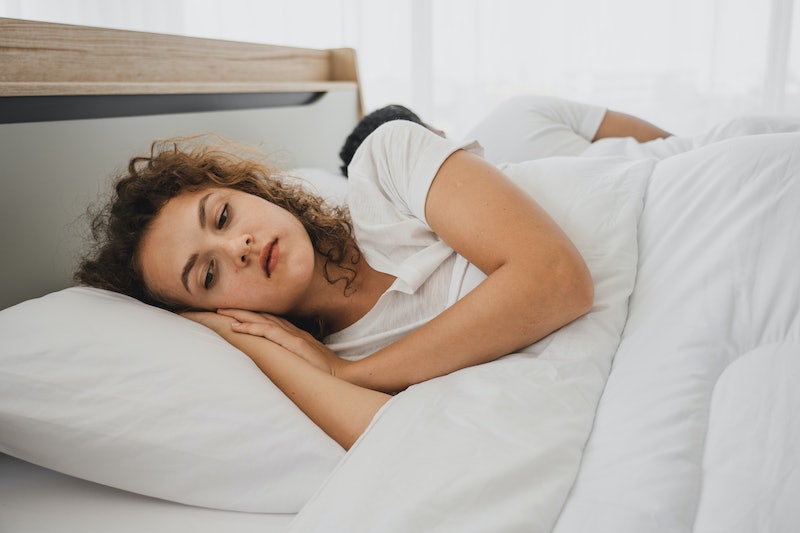 Whether you realize it or not, there are a lot of things that happen in the brain when you’re falling in love. For instance, norepinephrine stimulates the production of adrenaline, which causes your heart to race and your palms to sweat, and the release of dopamine can give you feelings of euphoria, and excitement. A combination of feel-good chemicals being released in your brain make falling in love an experience that’s unlike any other. But what happens to your brain when you fall out of love?

“When it comes to finding ‘the right one,’ science has established that there are several systems in our brain responsible for that,” Dr. Zorica Filipovic-Jewel, MD, divorce psychiatrist and professor of psychiatry at Mt. Sinai Hospital in New York City, tells Bustle. “It’s mostly a combination of several chemicals, better known as neurotransmitters: norepinephrine, dopamine, oxytocin, and serotonin.”

Your body changes when you fall in love. For instance, hugging, kissing, and having sex can lead to a rise in the hormone oxytocin, which lead to intense feelings of closeness, trust, and bonding. An initial drop in serotonin that occurs in the beginning of a relationship can lead to obsessive thoughts, anxiety, and the butterflies in the stomach. According to Filipovic-Jewel, it eventually normalizes and makes you feel good with the person you’re with.

What Happens To Your Brain When You Fall Out Of Love

“Falling out of love isn’t as easy as flipping a switch in the brain,” Dr. Catherine Franssen, Ph.D, professor of psychology and director of neurostudies at Longwood University, tells Bustle. “It’s a process of forgetting habits and connections, of altering hormones and neurotransmitters, and of changing behaviors.”

When being with your partner stops feelings good, the reward centers of the brain that release dopamine and cause pleasure to stop being stimulated. According to Franssen, this causes your brain to rewire and no longer see your partner as a pathway to happiness.

But when love no longer stimulates the reward centers of the brain by releasing dopamine and causing pleasure, the brain begins to rewire itself. It then stops seeing your partner as a pathway to happiness.

“The brain in love finds the nucleus accumbens (a key reward center) linked to the frontal cortex to generate positive feelings, and has a reduced connection to the amygdala (the fear center),” Franssen says. “Those connections reverse in the process of falling out of love. An individual finds the relationship no longer feels good, and that their social judgment changes.”

This is about the time when the rose colored glasses come off. You really start to notice all the flaws in your partner, and it can make you see their quirks as more irritating than endearing. In fact, a 2018 study published in the Journal of Experimental Psychology found that people who saw their partners and exes in a negative way were more likely to fall out of love faster.

“If you find that you are suddenly out of love, it probably has been a long slow process that you weren’t paying close attention to until you had reason to look,” Franssen says. “Sex might reinvigorate oxytocin and potentially reignite a spark, but it isn’t enough on its own.”

It's also important to note that love changes over time. According to Franssen, the stress hormones that can increase feelings of passion and make you breathless in the early stages can normalize and be replaced by feelings of calm and comfort. "The loving compassionate relationship can then serve as a buffer against outside stresses," she says.

As you can see, there's a lot more to love than meeting someone, liking them, and deciding you don't anymore. There's a whole science behind falling in love and falling out of it. This is what happens in your brain when the love for your partner starts to fade.

More like this
Are Quality Time & Physical Touch Love Languages Compatible?
By Lexi Inks
20 Things You Should Never Tolerate In A Relationship
By Rachel Sanoff and Kathleen Ferraro
12 Ways You're Sabotaging Your Love Life
By Teresa Newsome and Lexi Inks
Hinge's New NFAQ Feature Is Demystifying Queer Dating
By Emma Carey
Get Even More From Bustle — Sign Up For The Newsletter