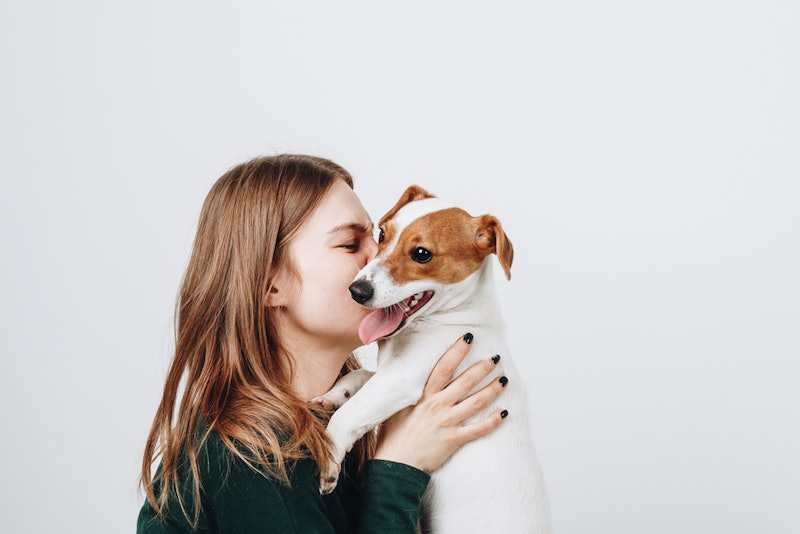 We all know what seeing a cute dog feels like (a warm rush of overwhelmingly positive feels), but according to experts, what happens to your brain when you see a cute dog is incredibly complicated and evolutionarily rooted.

Dogs make us happy, especially puppies, with their wiggly innocence and never-ending flow of affection. They love us easily and completely and that love creates a firestorm of physical and emotional responses in humans, which is just too obvious and fascinating not to look into. Bustle talked to clinical psychologist Jephtha Tausig about what is really going on in our brains when we're having a full system melt-down over the mere sight of a fur baby, because this reaction is more than common and universally relatable. According to Tausig, we're actually pre-programmed to have this kind of reaction and while it might appear that it's directly related to the furry face before us, it's actually related to human babies.

"There is some research that seems to suggest that puppies, like kittens, and other things we typically feel are 'cute' cause us to react in a way similar to our reaction to human babies (i.e. something small, helpless, with proportionally large heads and eyes)," Tausig tells Bustle. While dog's eyeballs grow over the course of their life, they're pretty close to their matured size at birth, which makes them appear extra large as puppies, and according to Tausig, extra engaging for humans. "For many individuals the 'awwwww' response is part of our evolution in terms of being somewhat primed to assist or interact with babies who are in need of our protection and care," Tausig explains, tracing the response back to a biological purpose.

According to Tausig's explanation, the subtext of the inaudible exclamations we make when having a system meltdown at the sight of a puppy is really just "Hello small thing, reporting for duty! I am here to protect and love you!" But merely seeing a dog causes only one level of physiological reaction. Actually petting a dog has therapeutic benefits that can be as powerful as prescription drugs. Tausig tells Bustle that "there is additional research that shows that patting an animal (even a stuffed animal), causes blood pressure, heart rate, and respiration to calm down." That physical connection triggers the brain to release the bonding hormone called oxytocin, which not only makes us feel calm, but also makes us feel deeply connected to the dog. That very connection is evolutionary.

And while a high-pitched excitatory human response to a dog might be associated with a cocktail of feel-good brain hormones for said human, an exploratory study titled "Oxytocin and Cortisol Levels in Dog Owners and Their Dogs Are Associated with Behavioral Patterns" published by Frontiers in Psychology in 2017 suggests that the positive effects are not totally mirrored. The study found that a few minutes of petting and enthusiasm reduced cortisol (stress hormone) levels in both humans and dogs, and increased oxytocin levels in both humans and dogs. But after a few minutes of sustained attention, cortisol levels slowly rise again for dogs, proving that perhaps too much human attention can be worrisome for a dog.

So if you see a cute dog, go ahead and have the positive meltdown that your biology wants you to have, but if you're interacting with a cute dog, try to limit the amount of cooing you do.