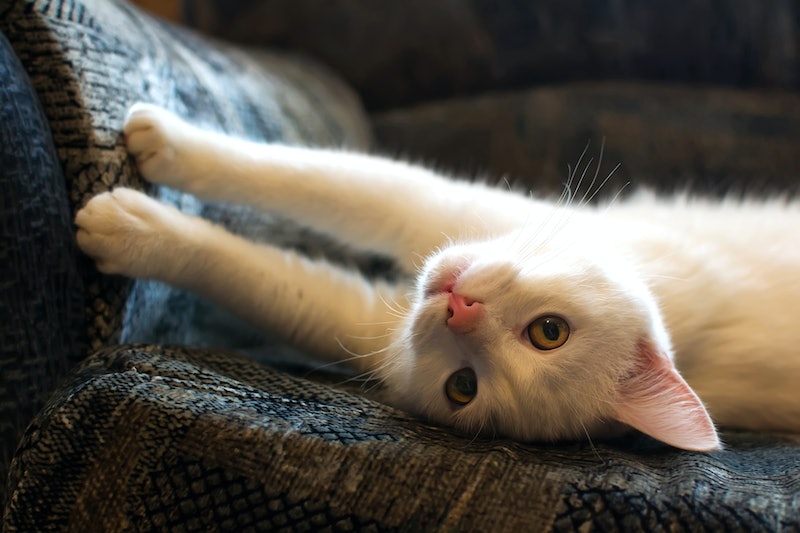 Owning a cat isn't always easy, as even the best behaved cats have their moments where they seem like little devils. One particularly frustrating thing about living with a cat is also living with their claws. Cats are known for their ability to claw their way through just about anything. They'll knead on your sweaters and ruin them. They dig their claws into your furniture, leaving scratches, dents, and lots of pulls. They reach up to scratch on wood, walls, and pretty much anything they can find. And sometimes they get defensive, scared, or a little too playful, and end up digging their claws into your skin as well. It's difficult to control what a cat does with their claws (or, really, what they do in general), and so a lot of pet owners decide to do what's easiest for them and declaw their cat. But while that might make your life less stressful, it's certainly not the best thing for your furry little friend. Before taking that drastic step (and it is drastic), you should ask yourself: what really happens when you declaw a cat? It's traumatizing and painful for them, and you should absolutely stay away from the practice.

First, though, let's just think about the fact that cats need their claws. Imagine if someone took you to the doctor and had all the tips of your fingers removed. Think about how you would feel and how that would affect your life. This is similar to what a cat goes through when their claws are removed. According to the Ontario SPCA and Humane Society, a cat needs their claws to do things like hunting (a natural instinct for them — even if the cat is indoors, it will play at hunting and catching with toys), stretching and exercise, climbing, protecting themselves, and leaving their scent behind. Cats claw and scratch at things because it feels natural and right for them — taking that away is just plain cruel.

Realizing how integral a cat's claws are should persuade you away from declawing. But if that doesn't work, think about the practice itself, which is painful and traumatic for your poor cat, with many negative side effects that they have to live with — not you. When a cat is being declawed, their nails aren't just being trimmed back. The process is essentially removing the bones at the tips of their toes. Doesn't sound very pleasant, does it?

According to Pet MD, there are a few different ways to go about declawing, but they all involve the same thing: removing the little piece of bone that the claw comes from in order to fully remove the claw (otherwise it will likely grow back). It is, quite literally, like cutting the tip of your finger off. It's a time-consuming procedure, and the trauma doesn't end in the vet's operating room.

A 2017 study in the Journal of Feline Medicine and Surgery found that declawing a cat can result in long-term problems for your kitty. Researchers looked at 274 cats of different ages, half of which had been declawed, watching them for signs of pain and discomfort, like having issues going to the bathroom, body tension, and excessive licking or chewing of their fur. What they found was troubling: the declawed cats showed a lot more signs of pain as they were much more likely to pee in the wrong places, bite people, act more aggressive, and over-groom themselves. They were also three times more likely to be diagnosed with back pain and/or chronic pain in their paws. The study also concluded that declawed cats have more trouble walking (which makes sense, since the tips of their toes were removed).

That kind of research has to make you wonder why people are still declawing their cats and putting them through this. The reason it still happens is probably a combination of things, like owners not truly realizing what the declawing process is like, as well as people who are only thinking about their own needs rather than their cat's needs. Fortunately, it seems like something is finally being done about this dangerous practice: New York has just become the first state to pass a bill that makes declawing a cat illegal. Hopefully other states will follow suit.

If your cat is driving you crazy scratching everything, there are other ways to work on that besides taking the dramatic route of declawing. Make it a point to clip their nails regularly, which shouldn't hurt them when done right. Get them a few scratching posts and encourage them to scratch there instead of on your furniture. You can even talk to your vet if you think things are really bad. Or, if you really can't handle it, then maybe consider whether a cat is the right pet for you. They deserve to keep their claws, and you shouldn't be the one to decide to take them away.

More like this
The 5 Best Cat Trackers
By Megan Gray
30 Smart Things Trainers Use To Help Dogs Behave Better
By Nikol Slatinska
The 6 Best Brushes For Cats That Hate To Be Brushed
By Danielle Calma
The 5 Best Rugs That Cats Can’t Destroy — & Why Your Cat Scratches, According To A Vet
By Danielle Calma
Get Even More From Bustle — Sign Up For The Newsletter