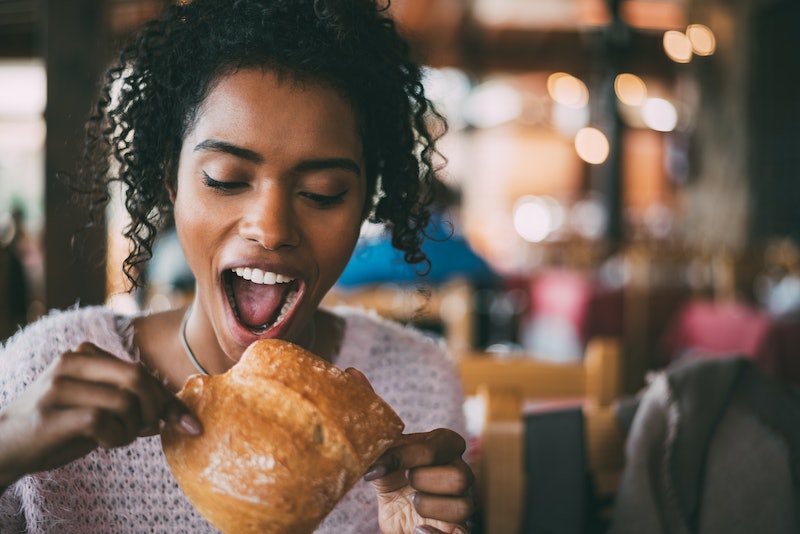 What happens when you stop eating gluten will have a lot to do with why you're eliminating it from your lifestyle, as well as how you go about doing it. If you're cutting back, or replacing your fave breads and cereals with gluten-free options, you might notice a few changes here and there. But if you're going to live a gluten-free life, it can have an even bigger the impact on your health.

And this is, of course, the most true for folks who need to stop eating gluten for medical reasons. "A person should completely eliminate gluten if they have either celiac disease or non-celiac gluten sensitivity," Heidi Moretti, MS, RD, a registered dietitian with over 20 years of experience, tells Bustle.

When it comes to celiac disease, which means your body has an immune response to gluten, you might experience fatigue, diarrhea, abdominal pain, nausea, and constipation, according to the Mayo Clinic. If you have a sensitivity these symptoms will be less severe, but can still prompt you to go gluten-free. And once you do, as per a doctor's orders, they will pretty much go away.

Now, let's say you don't have celiac disease or a gluten sensitivity, but want to stop eating it anyway. In that case, you'll want to make sure you aren't just replacing your usual foods with gluten-free processed versions, Ariane Resnick, CNC, a special diet chef and certified nutritionist, tells Bustle. This is the route many people take, only to end up feeling worse because the ingredients in these foods are nutritionally void, Resnick says.

For folks with celiac disease whose bodies can't process gluten, even processed foods will be easier for them to digest than something they have a systemic reaction to, Resnick says, so they might still feel better. But if your goal is to feel healthier, merely reaching for gluten-free options isn't guaranteed to do the trick.

That said, cutting back on gluten can still have a positive impact. "Because [gluten is] inflammatory, you may notice less inflammation," Resnick says. And you may feel better as a result, especially if you replace your go-to gluten-y snacks with whole foods, Resnick says, rather than gluten-free processed foods, which are also inflammatory.

It's important to remember that gluten isn't inherently bad, and not everyone has a reaction to it. "Gluten is a protein found in wheat, barley, and rye," Resnick says. "It got vilified in recent years just like fat did back in the 1980s [...] People started eliminating it from their diets without medical reason (myself included!) because we were told it would make us ill." But the truth is, that's not always the case.

"Many who didn't notice a positive difference returned to it years later (myself included again!) because wheat products are delicious, readily available, and far easier to work with than their gluten-free counterparts," Resnick says. So if you want to eat these foods, go for it.

Cutting back in this area, however, may make it easier to avoid those aforementioned processed foods. "Some people eliminate gluten from their diet and find that they feel better, which may be caused by reducing their intake of these highly processed foods rather than the gluten itself," Dr. Josh Axe, DNM, CNS, DC, a clinical nutritionalist and founder of Ancient Nutrition, tells Bustle.

But when you have the choice, it'll be about focusing on what works best for you. "Choosing to eliminate gluten from your diet if you don’t have celiac disease or a sensitivity to gluten can definitely be a personal choice," Axe says. "However, it’s important to ensure that you’re replacing these foods with other nutritious ingredients, like gluten-free whole grains, fruits, or veggies to maximize the potential health benefits."

All sorts of things can happen when you stop eating gluten, from clearing up medical issues, to experiencing less inflammation, to eating more wholesome foods. But it's something you'll definitely want to think about — and talk with your doctor about — before committing to it.

Ariane Resnick, CNC, certified nutritionist and author of How To Be Well When You're Not