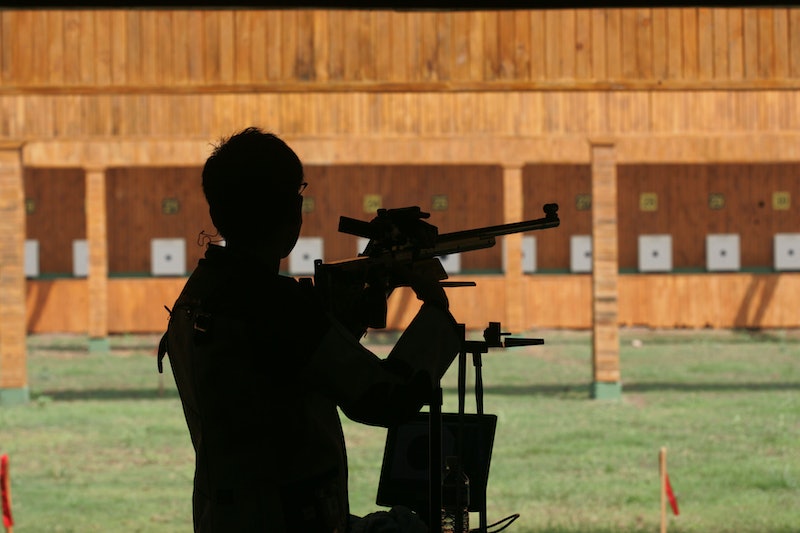 When it comes to the debates surrounding gun control, many conservatives rely on an age-old argument: Regulating guns, or even banning them, won't stop people from finding a way to own one. This argument not only ignores the very purpose of laws, but refuses to acknowledge the ways they're at work in our everyday lives. Case in point? Because the GOP has put so many legal barriers in the way of women's access to abortion, it has become increasingly difficult for a woman to receive one. And so, it only logically follows: If guns were as hard to get as abortions, then, well, a lot fewer people would have guns.

In the aftermath of Sunday night's shooting in Las Vegas, which claimed the lives of more than 50 people and injured hundreds more, this simple fact became worth reiterating: Regulation works. This is not to say that abortion and guns are the same thing; only that the way the government, especially the GOP, treats them is perfectly contradictory.

On social media, a commonly cited quote made the rounds again, calling on readers to consider what would happen if the United States treated "every young man who wants to buy a gun like every woman who wants to get an abortion."

The speaker of the quote, whose identity remains unknown, mentions just a few of the dozens of obstacles women might face when seeking an abortion, from 48-hour wait periods to mandatory parental permission to required ultrasounds. All of these regulations have proven effective at making it not just difficult, but impossible for many women to receive an abortion — which is exactly the point of them.

The reminder of the devastating effects of abortion regulations, while always salient, is especially apt right now, as the U.S. House of Representatives approaches a Tuesday vote on legislation that would ban abortions after 20 weeks. The bill, which is called the "Pain-Capable Unborn Child Protection Act," carries with it the threat of a fine or up to five years in prison for anyone who performs or attempts to perform an abortion on a patient more than 20 weeks pregnant. While the House had once passed similar legislation in 2015, it had been swiftly voted down by the Senate, where it died.

House Majority Leader Kevin McCarthy (R-Calif.), though, is persistent. "Not only will passing this legislation keep a promise we made, but all the work is for the same goal: ending suffering and helping people live," McCarthy told reporters at a September press conference.

So how is it, then, that a party so keen on regulating abortions — which limits the freedoms of women across the country — could argue so fervently for the government to leave guns well enough alone, lest regulating them take away Americans' rights?

This question is one many Twitter users wrestled with on Monday, pointing to what they saw as GOP hypocrisy.

It's unlikely that any Second Amendment-loving Republican legislator would see the logical inconsistency in their stance. As gun control debates rage on, it's become clear that the GOP has found ways to skirt its own contradictions.

On Monday, President Donald Trump delivered a national address offering his condolences to the victims of the Las Vegas shooting without mentioning the word "guns" once. When his administration was directly confronted on the issue of gun control, White House press secretary Sarah Huckabee Sanders insisted it wasn't the time to consider “laws that won't ... stop these type of [shootings] from happening.”

And so, the unknown speaker's point — about the government treating prospective gun owners as it would women seeking an abortion — still stands.

"It makes more sense to do this with young men and guns than with women and health care, right?" the speaker asks. "I mean, no woman getting an abortion has killed a room full of people in seconds, right?"

More like this
5 Ways To Stand In Solidarity With Women In America From The UK
By Sophie McEvoy
How To Fight For Reproductive Rights, Based On How Much Time You Have
By Courtney Young
How Getting An Abortion Has Changed From The ’60s Through Today
By Amanda Chatel
34 Quotes That'll Inspire You On Juneteenth & Beyond
By Syeda Khaula Saad and Siena Gagliano
Get Even More From Bustle — Sign Up For The Newsletter