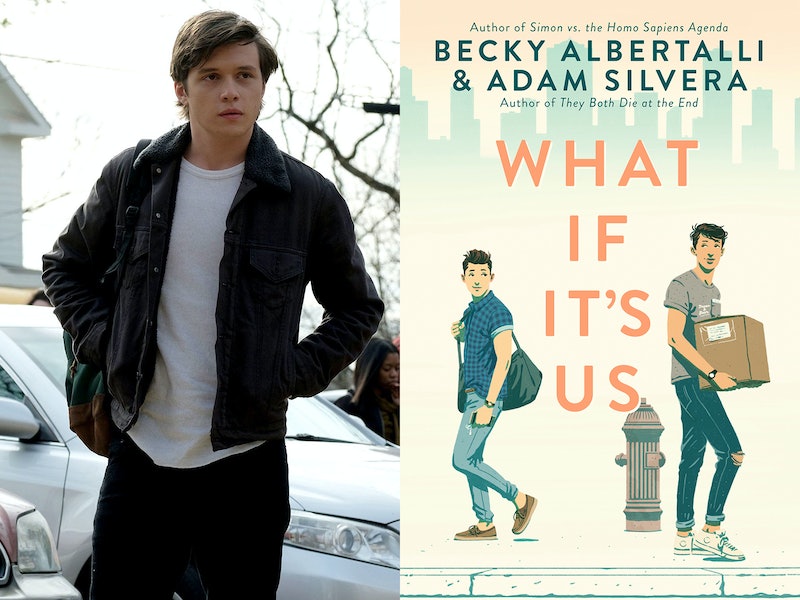 Becky Albertalli and Adam Silvera's upcoming novel, What If It's Us is becoming a movie, and it could be the next big gay rom-com. If the name Becky Albertalli sounds familiar, it should: She's the author of Simon vs. the Homo Sapiens Agenda, the book upon which the film Love, Simon was based.

What If It's Us doesn't come out until Oct. 9, 2018, but the screen rights have already been acquired by Anonymous Content, the production company responsible for 13 Reasons Why, The Revenant, and The OA. Brian Yorkey, the Pultizer Prize-winning 13 Reasons Why creator, will develop the screen adaptation of this queer, YA love story.

What If It's Us follows Arthur and Ben, two young men — dubbed as both "cinnamon rolls" and "disaster gays" by adoring Goodreads fans who read advanced copies of the book — who meet unexpectedly at a New York City post office. Broadway-obsessed Arthur is only in town for the summer, and Ben has just gone through a rough breakup that sends him to the post office with a box of his ex's belongings. Nothing is certain in the big city, however, and no one can say whether Arthur and Ben will go big or go home alone. But hey, a reader can dream, right?

The highly anticipated YA novel is the first collaboration from Albertalli and Silvera, each of whom is a YA superstar in their own right. In addition to Simon vs. the Homo Sapiens Agenda, Albertalli is the author of The Upside of Unrequited and Leah on the Offbeat. Adam Silvera is the author of the Goodreads Choice-nominated YA novels More Happy Than Not, History Is All You Left Me, and They Both Die at the End.

What If It's Us by Becky Albertalli and Adam Silvera, $19, Amazon or Indiebound

Anonymous Content's film adaptation of What If It's Us will be produced by Joy Gorman Wettels, who worked with Brian Yorkey on 13 Reasons Why. Albertalli and Silvera will also produce. In a joint statement, the authors wrote that "The universe couldn’t have presented a more perfect dream team than Brian, Joy, and Kat. We immediately fell in love with their vision for this film, and we can’t wait to watch them bring What If It’s Us to life."

What If It's Us is available for pre-order today from your favorite bookseller, and you can find Albertalli and Silvera's new YA novel in stores on Oct. 9. The audiobook version of What If It's Us features Dear Evan Hansen's Noah Galvin as Arthur and Teen Wolf's Froy Gutierrez as Ben. If you just can't wait to read the book, take a sneak peek at the first three chapters over at Epic Reads.