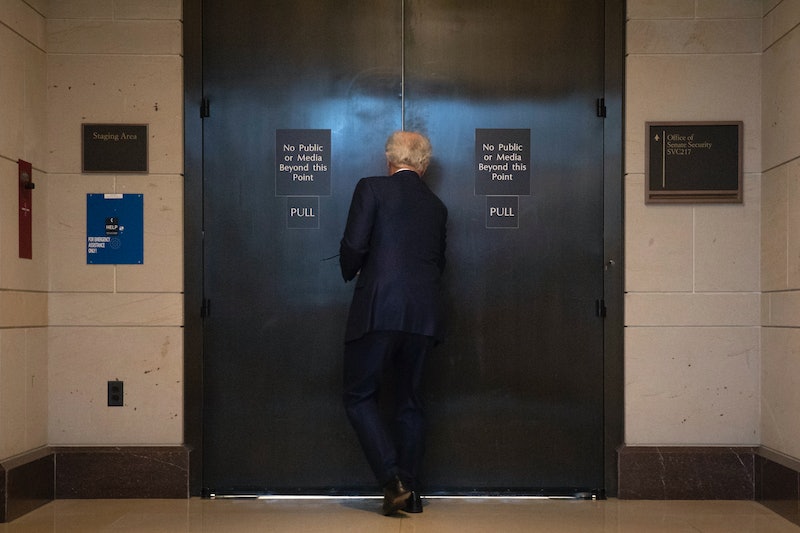 Senators had to read the FBI's notes on its latest investigation into Brett Kavanaugh's background in a room specifically designed for secrecy on Thursday morning. But what is a Sensitive Compartmented Information Facility (SCIF) exactly? This is far from the first time the government has utilized SCIF spaces.

The White House released the FBI's notes on Kavanaugh to the Senate early on Thursday, and Majority Leader Mitch McConnell said in a statement that "there will be plenty of time for Members to review and be briefed on this supplemental material before a Friday cloture vote." If passed, the cloture vote would give the Senate just 30 hours to debate Kavanaugh's confirmation before making a final decision.

But in order to review the FBI materials, each senator has to go to a designated SCIF. The Office of the Director of National Intelligence requires that all Sensitive Compartmented Information "be processed, stored, used, or discussed in an accredited SCIF," which must follow "uniform security requirements," according to ABC News. SCIF visitors are closely monitored, and the rooms themselves have safeguards to prevent outside intrusions or surveillance — i.e. to prevent anyone who's not a member of the Senate from seeing the FBI's notes on Kavanaugh.

The most well-known SCIF is the White House Situation Room, where the president frequently discusses national security issues. The room where senators are required to read the FBI's Kavanaugh summary isn't too different — it's just not located in the White House.

Senate Judiciary Committee chair Chuck Grassley (R-Iowa) said in a statement on Thursday that there's nothing new in the FBI's notes, though the exact details of the investigation haven't been made public.

"These uncorroborated accusations have been unequivocally and repeatedly rejected by Judge Kavanaugh, and neither the Judiciary Committee nor the FBI could locate any third parties who can attest to any of the allegations," Grassley said. "There's also no contemporaneous evidence. This investigation found no hint of misconduct and the same is true of the six prior FBI background investigations conducted during Judge Kavanaugh's 25 years of public service."

But the opposing party doesn't agree. After Democratic Senate leaders read the confidential investigation summary, Minority Leader Chuck Schumer (D-N.Y.) said in a Thursday news conference that the scope of the investigation was too limited to yield accurate results.

“We had many fears that this was a very limited process that would constrain the FBI from getting all of the facts,” Schumer said. “Those fears have been realized.”

Two swing votes — Sens. Jeff Flake (R-Ariz.) and Susan Collins (R-Maine) — indicated after leaving the SCIF that the FBI materials didn't include corroboration of the sexual assault allegations against Kavanaugh. Flake told The Hill's Alex Bolton on Thursday morning that he's "seen no new credible corroboration — no new corroboration at all." He added that he agrees with Collins that the investigation was thorough.

Regardless of where senators fall on the Kavanaugh confirmation, they have to jump through some hoops just to get their eyes on the FBI's notes. It's now up to them to decided whether or not Kavanaugh is fit to serve on the Supreme Court.