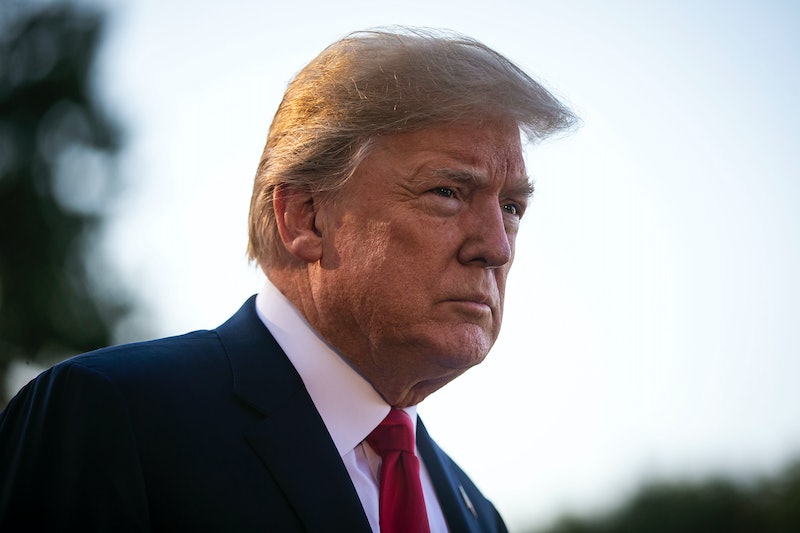 Just three days before President Trump is slated to land in the United Kingdom for a highly-anticipated visit, the BBC's Panorama aired a 30-minute report featuring new allegations that asks if Trump's a "sex pest." The report is not available for streaming outside of the UK, though several news outlets gained access and short promo clip was shared on Twitter.

The report was put together by Panorama, an investigative television show which airs on the BBC. Monday night's episode was entitled "Trump: Is the President a Sex Pest?" The White House has not publicly responded to any allegations contained in the report. Bustle has reached out to the White House for comment.

A "sex pest," for reference, is a slang term describing a person who bothers others for sexual attention. Their peers might also consider them to be unusually obsessed with receiving said sexual attention.

According to the clip that Panorama used to promote the episode, a woman named Barbara Pilling told the BBC that she met Trump at a party in New York in the late 1980s, when she was 17 years old. Trump would have been in his 40s at the time. Piling claimed that when she told Trump her age, he responded, "Oh, great. So you're not too old and not too young. That's great."

In her interview, Pilling described feeling uneasy in the environment, and feeling like she needed to leave as soon as possible.

"He was just disgusting," Pilling said. "I felt like I was in the presence of a shark getting ready to roll his eyes back in his head and bite me, you know, that's how I felt. It was just like get the hell out of here."

Another woman, Heather Braden, says in the clip that she used to bump into Trump at parties in Miami, back in the 1980s and 1990s. She described a culture wherein only a few men would attend parties with dozen of younger models.

"I remember particularly seeing him at a party at a house in Miami," Braden says of Trump. "This particular party, there were four men and probably 50 models. I felt like a piece of meat in a meat market. You know, I mean, what else could I feel like?"

Panorama also spoke with a man who claims to have attended several similar parties, but who did not want to be identified. Instead, his voice aired over nondescript video footage of a city at night.

"There was a lot of cocaine around, there was a lot of alcohol," he says in the clip. "They were all older men. These were guys who could easily be their fathers, two times over. You had men in their fifties, sixties on up. It was kind of like a feeding frenzy. The girls were there as consumables, let's just call it that."

According to Panorama, the unnamed source alleges that Tump was "notorious" for how he interacted with young models. During his interview, he claimed that Trump would brag about what he had done with the models.

"This guy was — it was like a predator in action," the unnamed source is heard saying over the background. "The next day or days after we would hear about it, he would brag about it to his friends and it would get around that he'd scored, you know, maybe one or two girls at a time, which is what he loved to do."

That the BBC chose to air the report less than a week before Trump visits is not insignificant. Tens of thousands of people are expected to gather in London on Thursday and Friday, in protest of the president's visit to the country. The protests are expected to be so disruptive that they have reportedly caused Trump to all but avoid the city. After he lands in London on Thursday evening, he is expected to swiftly exit, attending a series of meetings and events elsewhere in the country.