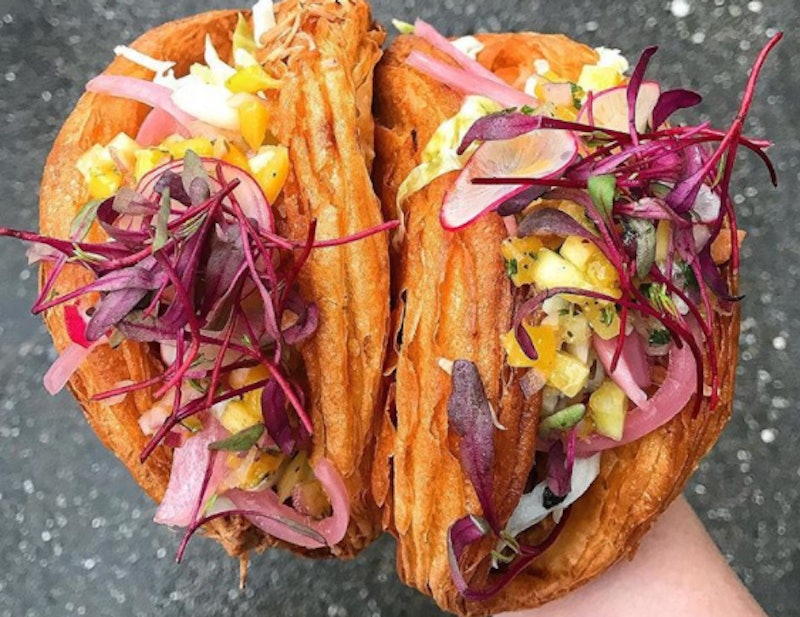 Food mash-ups are the trend that won't die. While some are highly questionable (I'm looking at you, flagels), others are pure genius. I'm talking about the latest and greatest taco-croissant mash-up that recently made its debut, affectionately known as the tacro, according to Cosmopolitan. The tacro comes to us from a San Francisco bakery called Vive La Tarte. They introduced the mash-up at the opening of their second location this month. Per BuzzFeed, tacros are $12 a pop. Pricey for a croissant with taco fillings? Maybe. But wait until you see these bad boys. They're stuffed to the brim with taco-y goodness, not to mention they're incredibly photogenic. I'm not trying to be superficial, but let's be honest: that's the only reason most people would buy a tacro in the first place. In this case, it's perfectly acceptable to judge a taco by its cover.

Cosmopolitan reports you can currently choose from three different kinds (or just buy all of them, which would be my plan): pulled pork, chile chicken with avocado, and barbecued jackfruit for our meat-free friends. A spokesperson told BuzzFeed a breakfast tacro may even happen in the future. In the meantime, you have these three choices, which are topped with sliced radishes and pickled onions, and come with green avocado salsa and red salsa.

And here's another from @allie.eats. I'm crying.

Twitter is in love with tacros, too. Can you blame it?

If, for some crazy reason, croissant taco shells aren't your jam, you can order a tacro with just the filling, says BuzzFeed. I'm not sure why you'd want to do that, though, unless you're some kind of croissant-hating monster. You probably don't like puppies, either.

Is the tacro merely the latest food fad? Possibly. But I highly doubt Vive La Tarte cares, because according to their Instagram, these bad boys are selling out within a couple hours. In other words, customers are going crazy for croissants. If you want to get your hands on a tacro, you should get there by 11 a.m., if not sooner, which is when they start to serve them. If you're really dedicated to your lunchtime food selection, you'll show up the night before with coffee and a tent to camp in.

While Vive La Tarte is certainly putting a unique spin on the croissant-taco mash-up (can we talk more about how beautiful these are?), they're not technically the first to do it. Back in 2015, Taco Bell tested out croissant tacos as part of their breakfast menu. They came stuffed with sausage, bacon, and/or egg, and this is what dreams are made of. At the time, they were only being tested in Ohio, those lucky ducks. While they still have other breakfast tacos, according to their menu, it doesn't look as though the croissant taco survived. It shall live on in my heart for all eternity. Behold.

Inventive taco creations seem to be a "thing," even outside the realm of croissants. Rubio's Fresh Mexican Grill once released a hamburger-taco hybrid, combining Mexican and all American food into one dish. Last year, Taco Bell announced a taco made with a fried chicken shell. And let's not forget these Korean chicken tacos shared by PopSugar, filled with rice, kimchi salsa, kimchi remoulade, and teriyaki, all wrapped up in seaweed.

The jury is still out regarding why we all love tacos so much. Is it the tastebud-tingling union of so many delicious flavors? Is it the blending of multiple textures, from crunchy to crusty to flaky to warm and gooey? Is it that tacos are small, portable, and easy to stash in your purse for a snack later on?

I'm going to go with all of the above. If you're in the San Francisco area, plan on stopping by Vive La Tarte for a tacro. Be prepared to fight people in line. It could get ugly.

More like this
TikTok's Favorite Bartender Thinks Mimosas & Bloody Marys Are Out For Brunch
By Alexis Morillo
Are We Drinking Rosé All Wrong?
By Sheila Yasmin Marikar
Here’s What Sarah Jessica Parker’s Canned Cosmo *Actually* Tastes Like
By Emma Garza
Meet The Spice Company Founder Who Sees Chai As A Metaphor
By Madhuri Sathish-Van Atta
Get Even More From Bustle — Sign Up For The Newsletter