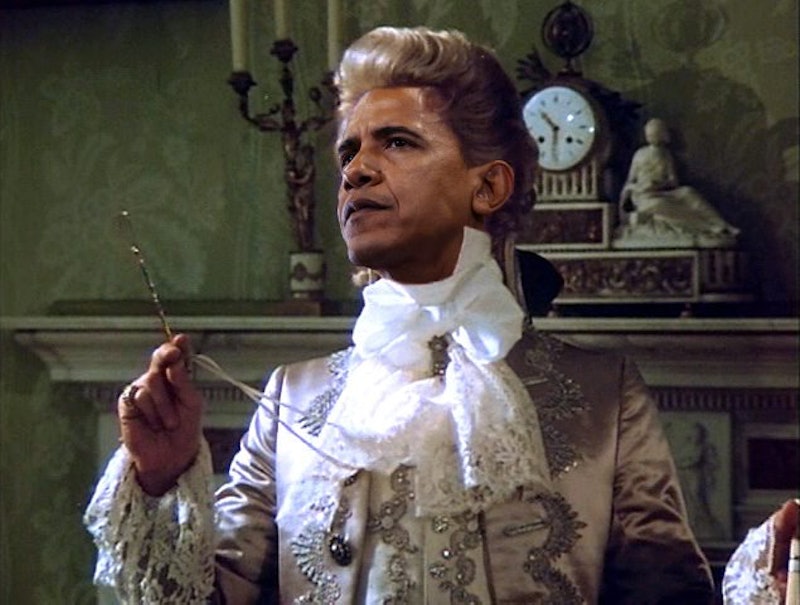 So, hey, did you know that “Baroque Obama” memes are a thing? Until today, I did not. I did not even know what “Baroque Obama” was, although, the name alone, once I had encountered it, gave me a pretty good idea of what to expect: Images of Baroque art (or, well, classical art — my knowledge of art history is patchy, but I'm not totally sure all of the images used for these memes is actually Baroque) with Barack Obama’s face strategically Photoshopped onto choice locations. It is, in a word, delightful. Come. Please share in this delight with me. It is too good to keep to oneself.

Obama is frequently cited as the most meme-able president in United States history. It’s true that this is partly because the beginning of his first term coincided with the growing popularity of internet memes; image macros hit the mainstream with LOLcats circa 2006, just about two years before Obama took office in 2008. However, just that factor alone wouldn’t have been enough to result in all those memes. I suspect it also had a lot to do with both the kind of president Obama was and the kind of person he is: He was forward-thinking, expressive, and beloved by many, the combination of which lent itself well to gentle ribbing through iconic images.

Interestingly, though, despite all of the Obama memes we have, it’s difficult to trace the history of Baroque Obama. BuzzFeed recently included it in a roundup of tweets depicting things people Googled by accident, only to find that the results were still wonderful; Bored Panda picked it up from there, which in turn led to Hello Giggles singling out Baroque Obama as the sole subject of a standalone post. But Baroque Obama, it turns out, has been around much, much longer than any of us might think — because the oldest tweets featuring the meme I’ve found date back to 2012. This would suggest that perhaps it came into being during the campaign process leading up to the 2012 presidential election. Also, it’s old. Five years is an eternity in internet time.

Alas, though, I have no way to confirm my theory. Normally I’d turn to Know Your Meme, that most hallowed of meme databases, to check whether my thinking is in line with everything else we know about Baroque Obama; somewhat astonishingly, though, Baroque Obama is almost completely absent from Know Your Meme. It doesn’t have its own page; it doesn’t make up a subentry on the main Barack Obama page; it’s just… nowhere. With one exception, that is: If you search “Baroque Obama” on the site, you’ll pull up one image — just one. It is perhaps the most well-known Baroque Obama image, and it is captioned, “If it ain’t baroque, don’t fix it.” But that’s it.

Regardless, though, given the meme’s longevity, it’s clear that it’s here to stay — even though Obama is no longer in the Oval Office. Here are 11 of the best examples of it floating around the internet. I don’t know about you, but it’s kind of exactly what I needed today. Enjoy.