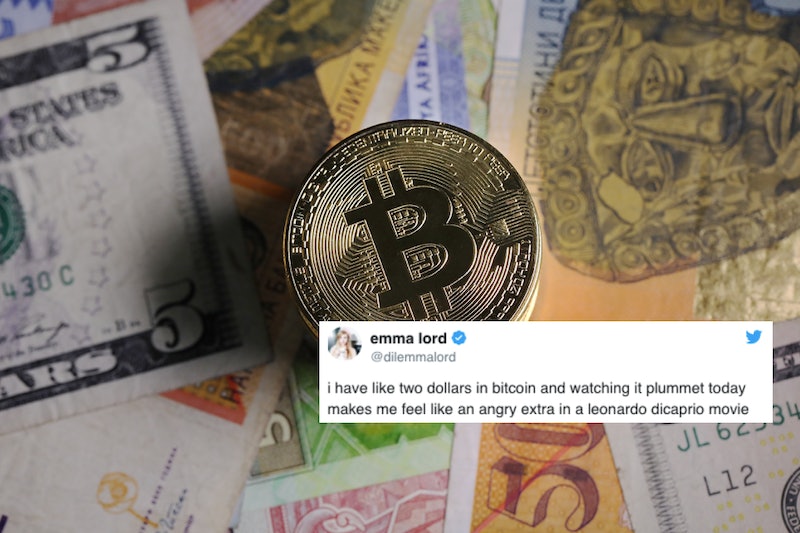 Bitcoin has been around since 2009 and has been trending in the cryptocurrency world since, but it arguably wasn't until 2017 that bitcoin became a household name after its value shot to nearly $20,000 per bitcoin. Now, however, bitcoin's value is sinking; according to the Wall Street Journal, bitcoin's 30 percent decline in the beginning of 2018 has been its worst decline in three years, and the Guardian reported bitcoin lost around $44 billion in value in January 2018 alone. But bitcoin's drop in value doesn't mean it's going away. Even if you don't want to invest in bitcoin or one of the other cryptocurrencies out there on the market, there are still some things you should know about cryptocurrency as we move forward into a financial future that's likely to be affected by it.

In fact, because of bitcoin's 2017 boom, cryptocurrency has suddenly wound up with a regular spot on the news cycle, and it's gone mainstream enough that the owner of Rainforest Cafe and Bubba Gump Shrimp Co. is considering accepting it at his restaurants. Prior to bitcoin’s boom, cryptocurrency was largely traded amongst people who were in the know, including lots of tech experts, but that doesn’t mean you have to be a tech expert to be in the know, or even to invest in and use cryptocurrencies, should the fancy strike you.

Let's start with the basics.

1. Just what is cryptocurrency?

As The Telegraph puts it, cryptocurrency is "a form of digital money that is designed to be secure and, in many cases, anonymous." Unlike money printed and regulated by the government, cryptocurrencies aren't beholden to any central monitor or rule-maker — though countries are now trying to regulate its trading.

The fact that cryptocurrencies are designed to be unregulated, and their transactions anonymous, is a big part of their appeal. People who don't trust banks or who dislike having their money tied to banks' or countries' financial rules dig this, but the unregulated nature of cryptocurrency does have its downsides, mostly seen in the wild fluctuation of value both from day to day, and over time. Kashmir Hill, a journalist who lived on bitcoin for a week and chronicled her journey in Forbes, tweeted in November 2017, "When I lived on bitcoin in 2013, I treated a bunch of strangers to a sushi dinner that cost 10 bitcoin. At current valuation, that was a $99,000 sushi dinner!" Yikes.

3. OK, but how do cryptocurrencies actually work?

Let's take bitcoin as an example. All transactions made with bitcoin are recorded on the blockchain, a publicly available ledger. As Bitcoin.org explains, if someone wants to pay another person in bitcoin, they send bitcoin from their digital wallet to the recipient's digital wallet. This transaction is secure because "[b]itcoin wallets keep a secret piece of data called a private key [...] which is used to sign transactions, providing a mathematical proof they have come from the owner of the wallet."

This signature also makes sure the transaction can't be altered once it leaves the owner's wallet, the site adds. When these transactions are "broadcast between users," it's time for the actual power behind the transaction to kick in — a process known as "mining."

Mining rigs — powerful computers — confirm the transactions are legitimate by solving complex equations, then add confirmed transactions to the blockchain. In return for confirming the transaction, the rig earns a little bit of bitcoin, which is how bitcoin miners make money.

4. Why is the technology behind cryptocurrencies important?

The basics of this process are important to know, because while economists generally don't think bitcoin itself is the future, other cryptocurrencies may be, and the blockchain technology may also find its way into our financial everyday. As Dyani Sabin writing for Futurism puts it, "[A] growing number of national banks, including the Federal Reserve, are interested in using blockchain technology to power a centralized national currency." The idea of countries implementing elements of cryptocurrency into regulated money is not far-fetched.

5. Is bitcoin the only cryptocurrency?

Nope! Bitcoin is just the tip of the iceberg. According to Dr. James Royal, writing for Nerdwallet, there are roughly 1,400 cryptocurrencies in circulation, and together they make up a value of "about $708 billion, according to Coin Market Cap." The most popular is bitcoin, of course, but the second most popular is the far less known (to folks outside the crypto world) currency Ripple which is valued at $119 billion. With a B.

6. How do you get started with cryptocurrency?

If learning all this has made you interested in picking up some cryptocurrency, you should know that investors generally "see them as mere speculations, not real investments," Royal says. The reason for that: "Just like real currencies, cryptocurrencies generate no cash flow, so for you to profit someone has to pay more for the currency than you did." That's why situations like Hill's now-$99,000 sushi dinner aren't unusual with cryptocurrencies.

But getting started with cryptocurrency is actually pretty easy. Coinbase is one of the largest networks for buying and selling digital currency. When you sign up on the site, you'll get a digital wallet to which you can connect your regular bank account, debit card, or credit card. Then you're set! You can use your "real-world" money to purchase several cryptocurrencies, including bitcoin.

The truth is, we can't predict what will happen with cryptocurrencies in the future, especially as more and more countries crack down on them. But one thing's for sure: The rise of cryptocurrency shows us that alternate financial institutions are something people are interested in, and the technologies and practices that arise from these new currencies will affect how money is treated in the future.