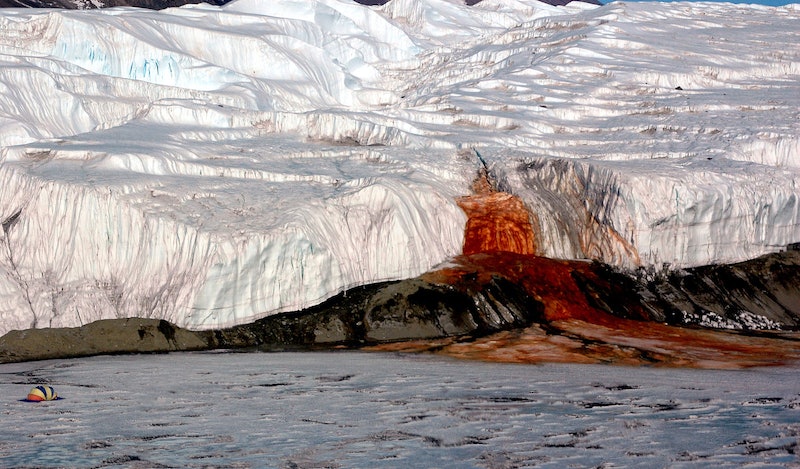 For over 100 years, a rather eerie natural phenomenon mystified us all: No one could figure out why Blood Falls is red. The puzzle was recently put together, though, thanks to researchers out of the University of Alaska Fairbanks and Colorado College; but in case you're late to the party, let's rewind. What it Blood Falls, and why have we been so obsessed with it all these years?

Discovered by geologists in 1911, Blood Falls is a five-story, bloody red waterfall that pours from the Taylor Glacier in the McMurdo Dry Valleys of Antarctica, and flows into Lake Bonney. In reality, however, Blood Falls' history goes back much further than that. Two million years ago, the Taylor Glacier trapped underneath itself a tiny body of water around 400 meters underneath. This water held a community of microbes; and because they lived in total isolation, they evolved in a very curious way. There was no light or oxygen and very little heat — a most extreme environment; the resulting lake that was trapped all these years contained a high amount of salinity and plenty of iron. (The iron was churned into the water because glaciers scrape the bedrock underneath the lake.)

It's a fissure in the glacier that has allowed this trapped lake to finally flow — another mystery in and of itself. With an average temperature of 1.4 degrees Fahrenheit and little melting on the surface, how on earth could this glacier have water running through it? It turns out that the water's very salty nature — due likely to the hidden lake forming after rising sea levels flooded eastern Antarctica some five million years ago — is responsible for this. Saltwater has a lower freezing point than pure water, and it releases heat when it freezes. As a result, it melts the ice around it and is able to flow through.

When scientists first found the waterfall, it was frozen; they suspected the creepy red color came from algae. However, it was recently discovered that the blood red tint instead comes from when the iron-rich water first hits the air. Fun fact: A similar oxidation process happens with our own bodies when our salty, iron-filled blood first makes contact with air and turns red.

The Blood Falls phenomenon has fascinated scientists for years. The McMurdo Dry Valley region is considered one of the coldest and most inhospitable places on the whole planet, often compared to the frigid and dry deserts of Mars, or Jupiter's moon, called Europa.

This hidden ecosystem of microbial life now has scientists wondering if Mars, too, could support a similar ecosystem. This ecosystem could also help explain the scientific hypothesis known as "Snowball Earth," which states that our planet was once completely (or almost completely) frozen — probably around 650 million years ago. If this was the case, how did living forms survive? Well, much like they did within the frozen Taylor Glacier.

While the mystery of Blood Falls seems to have been solved, there are still many questions to explore. Our environment isn't the only one that can sustain some form of life. There is much out there to be discovered, and nature is an incredible thing.

More like this
Why Experts Say Sleeping With A Fan On Isn’t Totally Risk-Free
By Sophie McEvoy
The 6 Best UV Umbrellas, According To A Dermatologist
By Rachael Green
‘Squid Game’ Creator Hwang Dong-Hyuk Just Dropped A Major Season 2 Tease
By Brian Anthony Hernandez and Bustle Editors
Everything To Know About 'Evil' Season 4
By Meguire Hennes
Get Even More From Bustle — Sign Up For The Newsletter