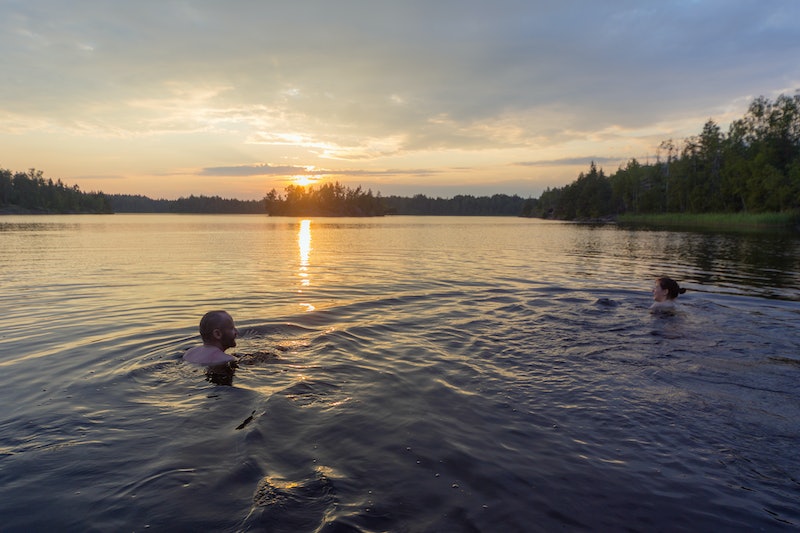 It's summertime, and that means fun, friends, and frightening headlines about things that sound like storylines straight out of The Walking Dead. Yep, on the heels of news reports about myriad cases of flesh-eating bacteria comes an equally troubling story about a man who died from a brain-eating amoeba he contracted after swimming in a lake at a North Carolina water park. While the mere existence of both of these parasites are enough to make you never want to go in the water again, how worried should you be about brain-eating amoebas?

The North Carolina Department of Health and Human Services released a statement stating that a man became ill after contracting an illness from Naegleria fowleri, an amoeba found in warm freshwater. While certainly upsetting, it's important to note that brain-eating amoeba infections are incredibly rare. In fact, statistically speaking, you're much more likely to get hit by a bus.

"Naegleria fowleri, the scientific name for this brain-eating amoeba, can cause a severe infection that leads to the deterioration of brain tissue. It is only in fresh-water lakes, ponds, and rivers in hot climates," Dr. Niket Sonpal, a New York City-based internist, gastroentrologist, and faculty member at Touro College of Osteopathic Medicine, tells Bustle.

Although not harmful if swallowed, the amoeba can be life-threatening if forced up the nose — for example, by accidentally inhaling water. "The disease cannot be contracted through food, ears, or eyes, so people should not be too worried every time they go swimming," Sonpal says. "While the contracting the infection is very rare (there have only been 145 known cases in the United States within the last 40 years), Naegleria fowleri can be found in most fresh-water lakes and rivers across the United States."

Because the amoeba thrives in warm waters, infections from Naegleria fowleri are more prevalent during the summer months and are most common in the southern part of the country, especially after a prolonged period of heat, according to the U.S. Centers for Disease Control. In addition, there is no way to avoid Naegleria fowleri if you swim in warm, fresh waters.

"Recreational water users should assume that Naegleria fowleri is present in warm, fresh water across the United States," the CDC stated.

Symptoms of brain-eating amoeba can mimic those of bacterial meningitis, though the amoeba actually causes the disease primary amebic meningoencephalitis, a brain infection that destroys brain tissue. Symptoms generally present one to five days after the initial infection, and include headache, fever, nausea, and vomiting. Later symptoms present as confusion, loss of balance, neck pain, seizures, and even hallucinations, Sonpal says. The infection cannot be spread from person to person.

In addition, seek medical attention immediately if you develop a sudden fever, headache, stiff neck, and vomiting after swimming in warm, fresh water. But with only 145 cases in 40 years, odds are that you'll be better served by looking both ways before crossing the street — you know, because of that whole getting-hit-by-a-bus thing — than worrying about brain-eating amoebas. #TheMoreYouKnow