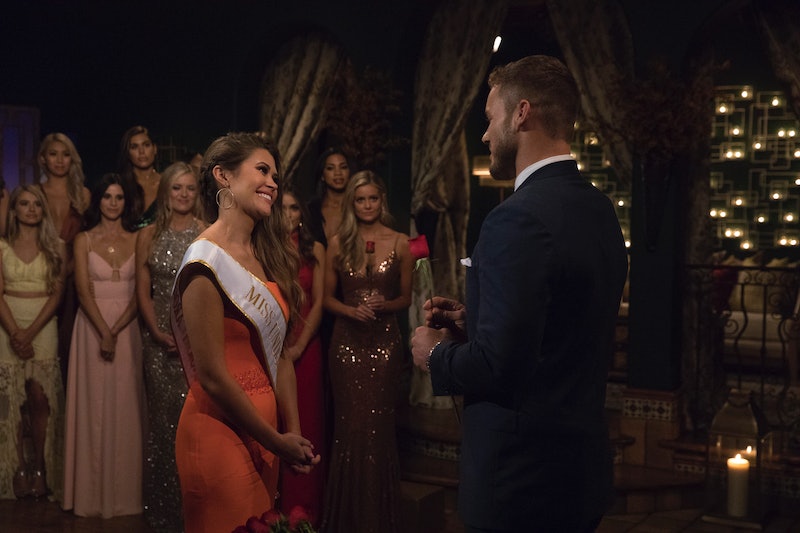 Caelynn won Bachelor viewers over from the very start when she walked out of the limo wearing a Miss Underwood sash — a nod to her runner-up status at Miss USA 2018. She stole Colton's heart too and he even gave her a kiss on night one. But Bachelor filming has long since ended, and what Caelynn is doing after The Bachelor is so important to talk about.

During a recent episode, Caelynn opened up to Colton about surviving a sexual assault while she was in college. The conversation was treated very sensitively by the show's producers and editors, who allowed Caelynn the space to speak her truth. In an interview with People magazine following the episode, Caelynn said that even the way the chat was filmed was sensitive. "The cameras were all kind of pushed back," she said. "I couldn’t see them. It was just Colton and me. And that was so important. It allowed for that safe space that is so necessary. I felt very comfortable."

Reliving the story to tell Colton, and again when the episode aired, was challenging for Caelynn. "In some ways it feels like it was a past life, and in situations like this where I’m having to relive it, it feels like it was yesterday," she told People. But now, Caelynn is putting her energy towards trying to help other people like her. "My focus is on survivors," she said to the magazine. "I want to help other people who are hiding out and feel like their voices are restricted. I really am so much stronger now, in so many ways."

After her episode, she posted a two-slide story on Instagram to share some sexual assault statistics and to provide resources for survivors. "You are not alone," she wrote in her caption.

But Caelynn isn't just trying to help fellow survivors. She's been up to a lot of things post-show as her Instagram indicates.

She Changed Her Hair

Her hair is much blonder and shorter now than when she was competing for Colton's heart. Perhaps it was a post-breakup hair change?

She Took A Selfie That Made Her Look Like Steve Jobs

In Caelynn's words, "Every time I wear a black turtleneck I feel like Steve Jobs" (Same, TBH.)

She Made Some Great Pirate Puns

For the swashbuckling Bachelor date, Caelynn posted a few pics from the episode with hilarious captions. For the above photo she wrote, "I must be huntin' treasure because I’m diggin' your chest." For the below photo, she wrote, "Colton: 'Caelynn what’re you doing up there?' Me: 'I’m looking for my booty.'"

She Opened Up About All The Feedback

During her intense conversation with Colton, he did a good job of just shutting up and listening to Caelynn — one of the most important things an ally can do. She clearly appreciated that, and took to Instagram after the episode to talk about Colton's reaction and the episode in general. She wrote:

"I am overwhelmed right now. I am so grateful to Colton for not just listening, but hearing me. I am grateful to everyone at The Bachelor for allowing me to share my story in the way I wanted, and on my own terms. Most of all, I am truly grateful for everyone who has sent me messages telling me their stories of fear, bravery and strength. The world can be a really dark place sometimes, but these survivors who stand up and speak their truth, they remind me that there is good and light and that everything is not broken."

What Caelynn went through is horrific, but she's found her way to the other side and is inspiring other survivors and educating viewers to the best of her ability. And that's the best use of The Bachelor platform ever.