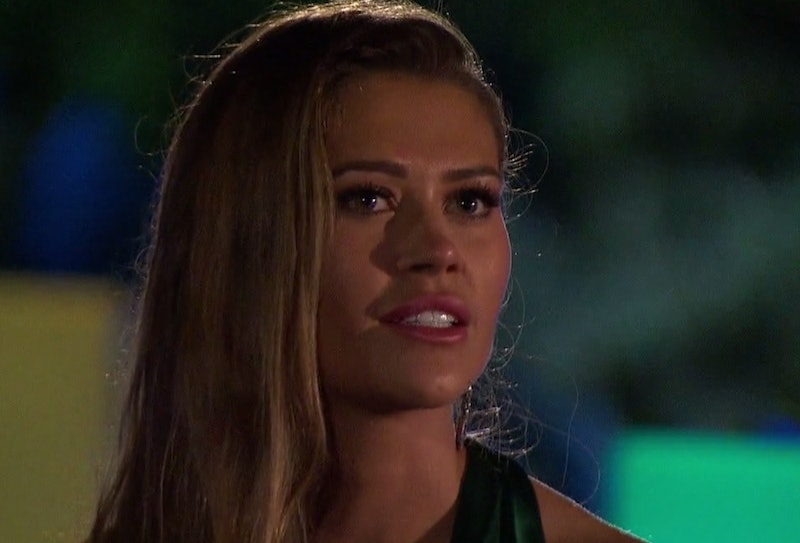 Warning: This article contains information about sexual assault, which some readers may find triggering.

Something groundbreaking happened during the Jan. 28 episode of The Bachelor. Caelynn told Colton about her sexual assault in college, and the show didn't totally botch the execution of a really important conversation. It's a marked change from how the same type of topic was discussed in 2017 following the brief Bachelor in Paradise filming shutdown.

The show let Caelynn tell her story in full, with no commercial breaks in between to extend the "drama." Producers didn't add dramatic music over the top of her words. Even Colton just sat and listened until Caelynn was done speaking. It was a refreshing take from a show that often capitalizes on the "drama" of its cast members' past traumas — both big and small — in the name of ratings.

Without any interruptions, Caelynn was seemingly able to tell her story in her own words, and it didn't seem like there was any prodding from production to encourage her to open up this way. Rather, Caelynn made it clear that she'd chosen on her own terms to tell Colton about being assaulted, as she has previously done with her Miss USA platform. "Every time I open up, it makes me stronger and I’m able to take a little piece of me back that was broken," Caelynn said. "I’m way stronger than I ever imagined. I wouldn’t open up with him about this if I didn’t feel safe with [Colton]."

For his part, Colton mostly just listened to Caelynn — as he should have. This is her story to tell, and his to just listen to. But when she was finished, he gave her a long hug and told her that he wanted her to know she was safe with him. He added, "You’re incredibly strong, you know that?"

Caelynn seemed to leave the conversation feeling better about being able to share this part of her past with Colton, and the audience was given an important lesson in how to handle conversations like these with respect and patience. The show concluded her segment by letting viewers know how to get help of their own if they've experienced a similar situation. Sure, The Bachelor might be "just" a television show, but with so many people tuning in each week, it has the platform to bring these kinds of issues the attention they need. And this time the show did so in a responsible manner instead of hyping the incident for ratings.

It was much different from the last time the topic of sexual assault has come up on the show. In 2017, BiP filming was suspended when a producer alleged that there had been sexual misconduct between two contestants, DeMario Jackson and Corinne Olympios. DeMario repeatedly denied the accusations, and The Bachelor's production company and Corinne's lawyers conducted independent investigations and found no evidence of misconduct. Corinne later said she was satisfied with the investigation's outcome.

The show did eventually resume filming, but in a promo leading up to the 2017 BiP premiere, the voiceover dramatically announced that "summer was almost ruined," while a woman's scream could be heard in the background. The promo not only made light of the issue, it placed blame for "ruining" summer on those who made the call to report the allegation and rightfully shut down production until the matter was resolved.

The actual show didn't address the topic until the second episode, which meant that fans who had been following the news leading up to the premiere were left waiting for this moment, as if it was just some rose ceremony or a particularly wild date. And although BiP did eventually include an important conversation on consent between host Harrison and the cast of the show, Corinne and DeMario didn't get a chance to speak until their reunion episodes aired weeks later. The result was that the issue was dragged on for weeks by the show, and it was hyped and dramatized at nearly every turn. It also allowed for weeks of speculation by fans (and haters) on social media, which the network seemed to use as further promotion.

By contrast, The Bachelor seemingly tried much harder for Caelynn's story. The show did run one promo for her conversation with Colton that rubbed some people the wrong way, but, in truth, it was devoid of most of the usual Bachelor drama tactics.

It was decidedly improved from the BiP promo, although it does still show room for improvement. It may be the promos' jobs to get people to tune in, but this is one moment the show could have skipped promoting in any capacity. The situation is serious and dramatic enough that it doesn't need to be amped up in a commercial.

The #MeToo movement has changed our entertainment landscape forever. Powerful men in the industry — both in front of and behind the camera — are being held accountable for their actions. And women are feeling empowered to share their stories because they know they're not alone. Caelynn was able to do the same for so many women watching, and it's important that she was given the space to do so by The Bachelor without dramatic music, commercial breaks to drag it all out, or over-the-top promos.

There's always room for growth in how our entertainment handles these kinds of stories, but The Bachelor has grown a lot in the last two years since Bachelor in Paradise. And if a contestant ever wants to open up about this type of subject again, the way the show treated Caelynn's story can serve as a road map for what to do and how to do it. Just... no more dramatic promos. Please.