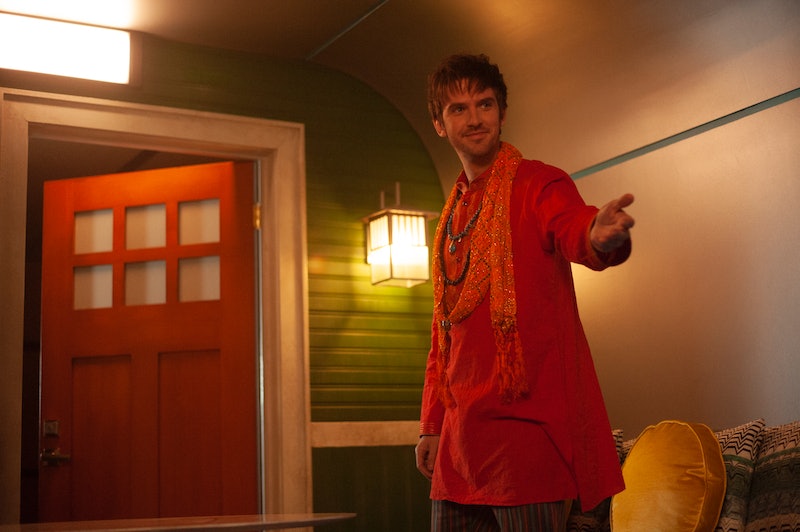 Spoilers ahead for Legion. Everything is topsy turvy on Legion. In Season 3, Syd and the others are working with Farouk (former Big Bad) to hunt down David (former hero), who is a super shady cult leader now. David seems to be doing OK, but his latest plan for Lauren Tsai's character Switch is intriguing. It's hard to tell what he's doing and if it's for good or evil but the biggest looming question so far is why David needs a time traveller on Legion? What exactly is he doing?

Sure, if you lived in a world with super-powered mutants, who wouldn't want to be friends with someone able to time travel? David specifically summoned Switch though, which is suspicious. The official synopsis of the season is not too helpful, either. It's a bit of a mixed message, if you will:

Unfortunately, [Season 2's] hunt for Farouk reawakened the dark voices in David’s head, and with them, a lust for power. At odds with everyone he once considered a friend, David enlists the help of a young mutant named “Switch” whose secret ability is key to his plans to repair the damaged he caused.

Does he really want to make amends, or does he want to use Switch's time travel abilities to gain an additional advantage over anyone who tries to take his power from him? It's not exactly David's fault that his motivations are difficult to pin down — he was essentially possessed by Farouk for the better part of his life, after all. But taking off with Lenny and starting a trippy cult aren't the best ways to convince the audience that he's a good guy.

Switch asks David point blank what he needs her for, and what the "Forces of Division" (formerly known as Division 3) are.

At first, his answer is Syd, but going back in time just to "get his girlfriend back" doesn't impress Switch. That's a wise instinct, as David has already dangerously abused mutant abilities in order to be with Syd. In Season 2, he altered her memory so she'd forget she was mad at him and they slept together. He truly became his inner comic book villain, and it's going to take a lot to redeem himself for those choices.

David then says that he doesn't think going back in time to try and fix things will work, but their vague conversation gets cut off when the two are attacked. The only reason he gives Switch for summoning her is "to go back in time, what else" — and that's not really helpful. However, when Syd kills David in the attack, Switch quickly reverses time and warns him so it doesn't happen again.

She's already proving her value. Maybe this is exactly why he wants her: as a security system.

Is David trying to be the hippie version of his father, Professor X, and gather mutants in a commune? He's not teaching them anything, but leading them nonetheless. With Switch's help, he can protect them too. Speaking of Charles Xavier, Switch may be how he gets introduced on this show, played by Games of Thrones' Harry Lloyd.

While David's specific purpose and specific need for time travel is still unclear, at least Switch is already on board and loyal to his cause. When Farouk summons Switch for a conversation in the astral plane, vaguely suggests that the concept of regret is feminine, and proposes that they two of them work together, she immediately rejects his offer. They're in this together now, whatever exactly "this" ends up being.