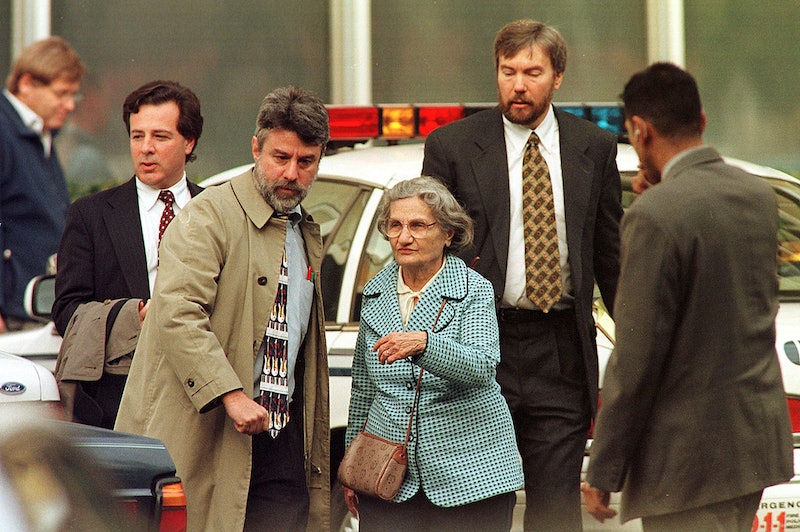 Discovery's series Manhunt: Unabomber goes inside the hunt for the serial killer "The Unabomber" in the '90s. He was eventually revealed as former professor Ted Kaczynski who is serving a life sentence in prison after he plead guilty to 16 bombings that killed three people and injured dozens. So, we know where he is, but what the Unabomber's brother, David Kaczynski is doing now is giving a voice to the family of a serial killer and advocating for mercy, rather than retribution.

David was actually a big part of the manhunt that wound up bringing the Unabomber down. Without the information David and his wife Linda delivered to the FBI, it's possible that profiler John Fitzgerald (the protagonist of Manhunt: Unabomber) would have struggled for far longer to figure out who the Unabomber was.

In 2016, David released a book, titled Every Last Tie: The Story Of the Unabomber and His Family. But the book was criticized by a Washington Post writer who felt that David didn't describe Ted Kaczynski's past in a way that made it easy to see that he would eventually become the Unabomber. "Two fascinating stories might have been told here, the story of the brilliant man who becomes a murderous madman being only the most obvious. The other is a story of two very similar brothers," The Washington Post writer said. "David Kaczynski steers clear of them both. Perhaps in another 20 years he’ll be ready to tell them."

That assessment from The Washington Post is surprising, because in 1996, after Ted Kaczynski's arrest, David said to The New York Times, "I think that truth from my point of view is that Ted has been a disturbed person for a long time and he's gotten more disturbed" over time. "What amazes me the most about it is that ... he had put a wall around that part of himself." Back then, David seemed willing to dive into his memories and relationship with his older brother in hopes of understanding his motivations.

David and his wife Linda were key in how the FBI learned about Ted, since they told authorities about him after reading Ted's published manifesto and recognizing his ideas. In the below interview with Newseum, David explained how Linda read the Unabomber's manifesto and was actually the one who realized that the author might be Ted Kaczynski. And in a 2012 story for NPR, David described telling his mother that Ted Kaczynski might be the Unabomber. "[David] remembers driving to his mother's apartment in Schenectady, NY, and knocking on the apartment door," NPR reported. "He remembers the way the look of happiness on her face slowly gave way to a look of concern, and then ... a look of horror."

According to NPR, David channeled the traumatic experience of realizing his brother was responsible for the Unabomber's crimes into advocating for the mentally ill. "He views the murderer in his family as mentally ill — schizophrenic — not evil," NPR reported. "A former social worker, [David] speaks frequently about mental health issues and is executive director of a group that fights against the death penalty." That group is New Yorkers Against the Death Penalty, according to Journey of Hope, which keeps track of anti death penalty activists. According to The Guardian, Linda suggested David should become an activist, too: "I think that put me into a process where I felt I could do something constructive. I could tell my story in a context that could mean something to people and perhaps could be translated into a change in the law in New York," David said. "Suddenly I felt I had a community of kindred spirits again and that meant a lot to me."

Through writing, speaking, and becoming an activist, David Kaczynski has gone form simply an informant who collected a million-dollar payout from the FBI for providing information about the Unabomber to a complicated figure. (David gave that money to his brother's victims, according to the San Francisco Chronicle.) Whether or not you agree with his political positions, it's clear that even long after the manhunt was over, David Kaczynski is still processing his brother's crimes.

More like this
5 Gripping Books To Read From Women’s Prize For Fiction Winner Ruth Ozeki
By El Hunt
This Michigan Couple Really Won $27 Million After Finding A Lottery Loophole
By Brad Witter
16 Novels That Paint A Realistic Portrait Of Abortion
By K.W. Colyard
Where Is Oscar Torres In 'Only Murders In The Building' Season 2?
By El Hunt
Get Even More From Bustle — Sign Up For The Newsletter