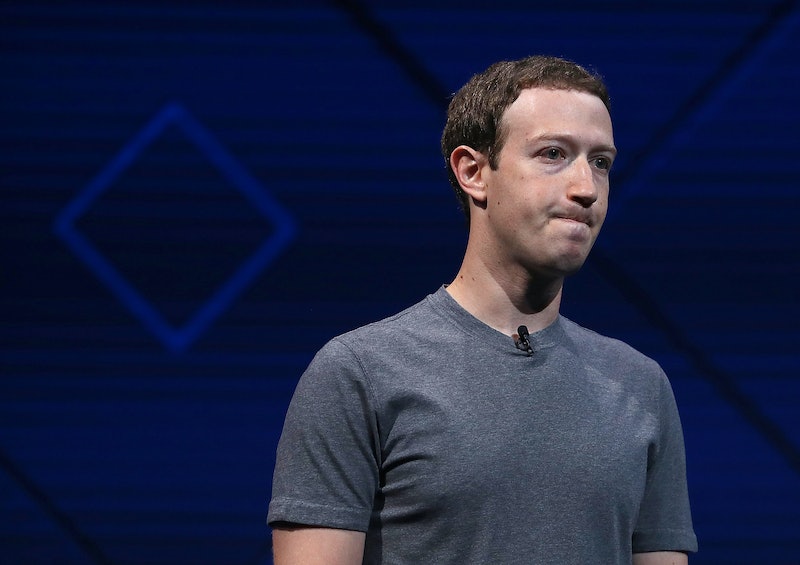 On Monday, the Federal Trade Commission announced it launched an an investigation into Facebook's privacy practices. This news comes shortly after a scandal involving Facebook and Cambridge Analytica, in which the social media platform was accused of mishandling millions of users' private information. The FTC explained that its investigation will examine whether or not Facebook violated a 2011 agreement, in which the company vowed to keep consumer's information secure, give clear notice about what data they were collecting, and get consent before sharing any private info.

At the time of the agreement, Facebook had been accused of repeatedly sharing and making users' data public. This latest investigation was sparked by the scandal involving Cambridge Analytica, a U.K.-based political data firm that worked for President Donald Trump’s 2016 campaign, Huff Post reported. Cambridge allegedly acquired more than 50 million Facebook users' data via a "personality" app, produced by a company named Global Science Research (GSR), according to The Guardian. Cambridge then allegedly used this personal data to deliver targeted political ads during the 2016 presidential campaign.

In a statement on Wednesday, Facebook CEO Mark Zuckerberg said this was a violation of the site's current terms of service. "This was a breach of trust between [app creator Aleksandr] Kogan, Cambridge Analytica and Facebook," he wrote. "But it was also a breach of trust between Facebook and the people who share their data with us and expect us to protect it. We need to fix that."

Zuckerberg explained that at the time of the data breach, Facebook apps were able to access a lot more personal user data than they are today. In 2014, a year after the personality app was released, "to prevent abusive apps," the company "dramatically" limited the data apps are able to access and ensured that no one could give data on behalf of someone else unless they authorized it.

The CEO went on to apologize for the data breach in full-page newspaper ads throughout the United States and the United Kingdom. “This was a breach of trust and I’m sorry we didn’t do more at the time,” he wrote. “I promise to do better for you.”

Following the FTC's announcement that it would be investigating the media company, Facebook's stock fell dramatically.

According to the FTC, the cost of violating an agreement can be up to $41,484 per violation. This could amount to millions in penalties, according to Massachusetts Sen. Ed Markey. "When Zuckerberg says 'breach of trust' vs 'breach of privacy' it’s not just semantics," Markey tweeted. "The distinction may be the difference between no punishment and millions in penalties."

In response to the FTC's announcement that they are opening a "non-public investigation," deputy chief privacy officer for Facebook, Rob Sherman, told CNBC, "We remain strongly committed to protecting people's information. We appreciate the opportunity to answer questions the FTC may have."

However, just days earlier, the platform adamantly denied that it'd violated the 2011 agreement. “We reject any suggestion of violation of the consent decree," according to a statement by a spokesperson for Facebook. "We respected the privacy settings that people had in place. Privacy and data protections are fundamental to every decision we make."