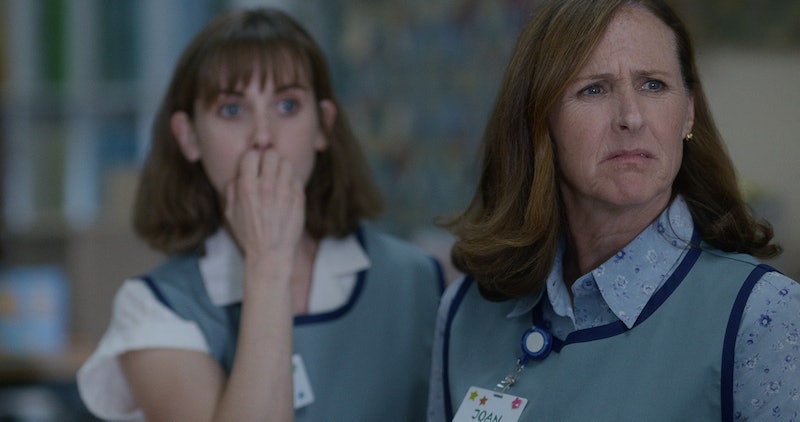 In the new Netflix movie Horse Girl, Alison Brie — best known for her roles as Annie on Community and Ruth on GLOW — turns in the most challenging role of her career. The movie is about a socially-awkward woman named Sarah who begins having strange visions and experiences that confuse her reality. It was co-written by Brie herself, but what is Horse Girl based on? Given the film's supernatural elements, it can't possibly be based on a true story... or can it?

Horse Girl is the culmination of several different ideas, and yes, a significant portion of the film's storyline was derived from Brie's real life. In the film, Sarah is a socially-isolated young adult who prefers the company of horses to people. She's also haunted by the memory of her late grandmother, a woman who suffered from severe psychosis but whom Sarah never actually knew. The specter of her grandmother's mental illness hangs over Sarah, as she worries that the same issues will someday plague her. So when outrageous things start happening in her own life, Sarah can't be sure if she's really experiencing the supernatural — like run-ins with space aliens — or if she's heading down the path to mental instability that her grandmother did. And its Sarah's fear of inheriting her grandmother's mental illness that Brie pulled from her own life.

"My mother’s mother lived with paranoid schizophrenia, and my mother grew up in a really traumatic situation. And I grew up with the mythology of my grandmother’s mental illness, hearing a lot of stories about my mother’s childhood and how the mental illness affected her," Brie told Vulture. The actor's own struggles with depression, and her internalized fear of developing her grandmother's mental illness, also played a significant factor in her writing.

"In the making of this movie I did a lot more interviews with my mom, asking more questions for Sarah’s personal backstory more than anything ... And I started to think about the more personal aspect of the story: 'Where does my fascination come from, having not known [my grandmother]," Brie told Vulture. "I started to realize this is much more about my fear of having mental illness in my bloodline. When will it come out? And will I have the awareness to know when it’s happening? In my own personal struggles with depression, I know the feeling of being helpless, feeling powerless, feeling alone. Right before I wrote [Horse Girl], I went through my deepest bout of depression in my life."

In addition to Brie's family history of mental illness, there were two other major factors that provided the inspiration for the film. One was director and co-writer Jeff Baena's desire to make a movie about a "horse girl." "[Brie's] grandmother had paranoid schizophrenia, and a lot of the stuff that she's talking about the movie was actually taken from her real life," Baena said at the Sundance Film Festival, reports Syfy. "So she's sort of pitching me this idea, and then I had another idea that had something to do with, like, a horse girl, and we realized these two ideas actually were kind of the same idea, so we just kind of married them together and just started working on it right away."

The third ingredient of Horse Girl's makeup is the science-fiction element, as Sarah comes to believe that she's being cloned by aliens in the movie. And that came from a love of science-fiction and an interest in extraterrestrials on the part of both of the film's writers. "I've always been interested in alien abduction for years," Baena told Syfy. "I've always been fascinated by it, and I actually had some pretty vivid dreams that involve aliens and, not to get super weird, but I feel like I've seen some UFOs. Yeah, so it's something of personal interest to me."

Several diverse ideas came together to create Horse Girl, which probably explains why it is so unique. The film marks Alison Brie's first credit as a screenwriter, but given the buzz the movie has created, it seems unlikely that it will be her last.

More like this
The New 'National Treasure' Series Trailer Teases The Return Of A Popular Character
By Grace Wehniainen
These 25 International Horror Movies On Netflix Prove Fear Is A Universal Language
By Bustle Editors
What’s New On Netflix: Ana De Armas’ 'Blonde' & A Nick Kroll Special
By Arya Roshanian
How To Stream 'The Woman King'
By Morgan Leigh Davies
Get Even More From Bustle — Sign Up For The Newsletter