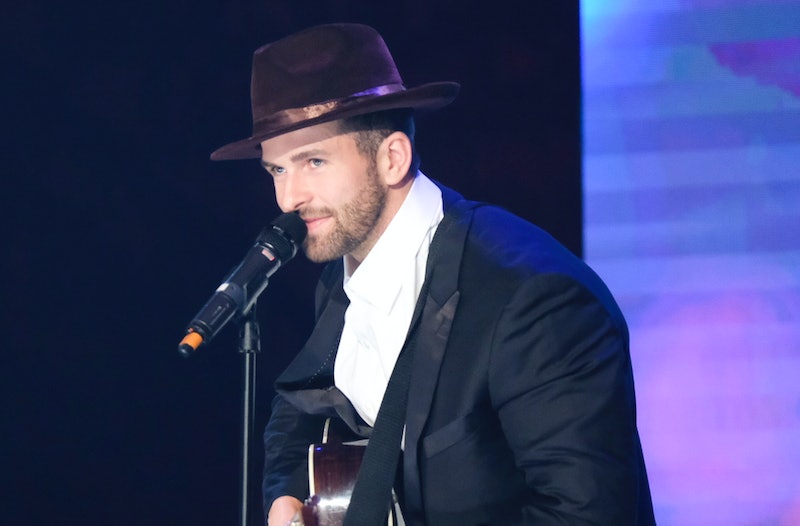 Bachelorette contestant Jed Wyatt might've raised some red flags during his Boston one-on-one date by admitting he only went on the show to elevate his music career, but Hannah Brown actually rewarded him for his honesty. Now, fans can't help wondering what Jed is doing after filming The Bachelorette. Is his music career blowing up like he hoped? Is he secretly meeting up with Hannah post-show? That's what viewers really want to know, but unfortunately he can't post that on Instagram. Well, at least not explicitly. But looking at his Instagram now, it sure seems like he makes it pretty far this season.

For the most part, Jed has been like any other Bachelorette contestant, enjoying the spike in Instagram followers, except that there's one glaring difference. Jed is in the spotlight for a negative reason, too: His ex-girlfriend Haley Stevens claimed they were dating when he went on the show. She also claimed Jed only went on to promote his music and promised they'd continue dating after. In a June 18 interview with People, she said, "He told me [the show] was just an obstacle and we’d be stronger on the other side because of it." (Bustle previously reached out to Jed for comment on the claims, but did not receive an immediate response.)

At this point, Jed has not publicly addressed Haley's accusations. He also hasn't posted on social media since this story broke last week. However, he did make one proactive move: Jed limited the comments on his recent Instagram posts.

With the few posts he's shared since the show finished filming, it's clear that Jed is all about two things right now: his music and The Bachelorette. He's posted promotional photos and videos from the season in conjunction with the new episodes every single week.

He combined both of those things with his last Instagram post. On June 12, Jed shared a video himself playing guitar and singing lyrics to an original song that he wrote about that famous salmon blazer from this season of The Bachelorette. Jed sang,

"It's floating around like ghost in the wind. Every rose ceremony, it's back again. You never know who might have to have it. That's the mystery of the salmon jacket."

Meanwhile, on June 11, Jed posted a video of himself pouring a bucket of milk over his head during one of the Bachelorette group dates. Clearly, he enjoys being on the show, but he also demonstrated that he has a punny sense of humor with the caption. He wrote, "This episode has been dairy interesting so far amirite...?"

Back on June 9, Jed shared photos from his performance at CMA Fest. He thanked everyone for support with a special emphasis on his parents. Jed wrote, "Mom and Dad, thanks for making the drive and dancing with me. Hell of a weekend. Love you guys."

Jed took a break between posts about the show on June 8. He shared a photo with two of his close friends hanging out in Nashville.

Just like most Bachelorette contestants, Jed shared a photo from his solo date with Hannah. In the caption he shared, "I knew I couldn’t have that good of a time and not tell her the full truth," which is a little ironic given the recent questions about his honesty.

Overall, Jed really loves reflecting on these dates, doesn't he? Could that mean he makes it all the way to the end? In a May 27 Instagram post, he shared a photo from the child birth and lamaze simulation that the guys did on one of the group dates.

Then Jed switched it up from posting about the show by sharing a photo with his sister on May 26.

His sister shared the same photo that day and captioned it, "happy you're home." Was she alluding that he just got home from filming The Bachelorette, as in he made it pretty far along in the season? Or do they just not live near each other and it was the first time they saw each other in a while?

Based on Jed's Instagram activity, he enjoys being a part of the show. Other than that, there aren't many conclusions to draw. Haters can say this adds up to him being an opportunist, capitalizing on the exposure. Others can argue that he just keeps his private life private by keeping personal updates away from social media. Now, the wait is on to see if he addresses the claims from his ex-girlfriend... and to check out what he posts next on Instagram, of course.