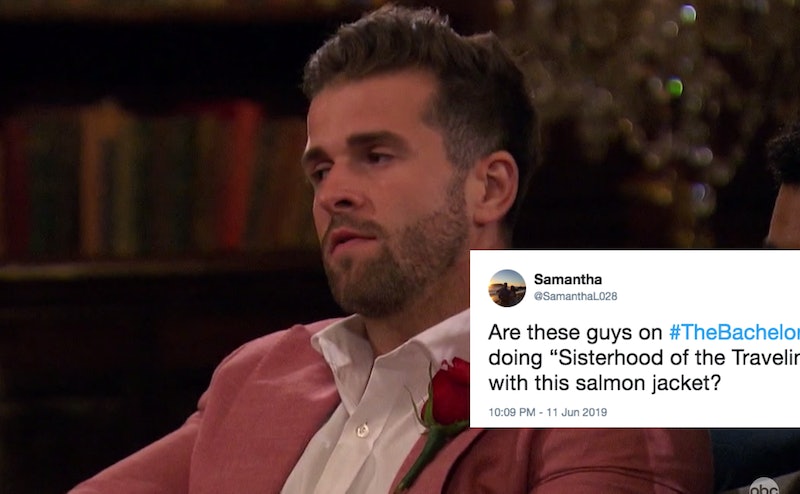 When you see one salmon blazer in a sea of black and navy blue, it can be a unique fashion statement. But what about seeing that same jacket over and over again? No, you're not the only one who noticed it — it sure seems like the guys are wearing the same salmon blazer on The Bachelorette this season, and Twitter is seriously amused.

Are they sharing the jacket in a "Brotherhood of the Traveling Blazer" type of way, à la The Sisterhood of the Traveling Pants? Or do Tyler, Jed, Connor, Dylan, and other guys in the cast all just happen to have very similar taste in clothing? We're still at a point in the season when it's tough to remember every guy's name, but saying "the one in the salmon jacket" just won't cut it. Not at this point at least. There is always someone wearing a salmon blazer. In. Every. Single. Scene.

Is salmon Hannah's favorite color? Was there a sale at Vineyard Vines before filming began? Are they conducting "Who wore it best?" polls in between conversations with Hannah at the pre-rose ceremony cocktail parties? Will Chris Harrison abandon his signature style and bro out with a salmon jacket of his own? This jacket is raising almost as many questions as Luke P.'s apparent red flags.

The Newport, Rhode Island rose ceremony even presented a major plot twist on Monday night. No, not Luke S. sending himself home before Hannah gave a rose to Luke P. (although that was pretty shocking). A plot twist of the fashion variety: There are TWO salmon-colored blazers.

Does that mean there's more and they weren't just passing around someone's jacket? Is salmon the new black?

Why is no one on the show talking about #salmongate? Hannah had to notice this right? Even if she didn't, Bachelorette viewers sure did and they tweeted about it — a lot. From theories on the jacket's origin to predictions for the rest of the season, that blazer is the talk of Twitter.

Before two jackets were spotted together in the same room, it made sense to assume the guys were just sharing clothes. Now it's just so unclear.

Will we ever have an episode without a salmon-colored clothing item? Hannah even wore a sweater in the same hue during her one-on-one date with Luke P.

For weeks, it made sense to assume that there was one jacket. Now, we know that's not the case. The mystery now is if the men own these blazers or if they do clothing swaps before the rose ceremonies.

4. Even Bachelorette Alums Have Noticed

Jason Tartick suspected that there was a barter system in place. That made a lot of sense. However, his girlfriend Kaitlyn Bristowe called him out for one flaw in the tweet: The jacket is salmon, not red, Jason.

Will the real blazer owner please stand up? We are going to need some receipts. Who purchased this?

6. Can Someone Officially Claim This Jacket?

Seriously though, can someone clarify the ownership situation?

7. Are They Friends Fans?

Maybe the fashion choice is just a nod to Ross Geller from Friends.

8. There's Definitely More Than One Jacket

Did they receive the blazers as gifts when they walked into the mansion? That would make sense.

Conspiracy theory about the conspiracy theories: They just all happen to own a salmon blazer. Who wants to wear a black blazer all the time? This is possible.

What does Luke P. think about the fashion trend? Does he feel left out? Did he even notice? Maybe he would fare weather with the guys (the viewers, and Hannah) if he threw on a salmon blazer. It's not as if it could make things any worse for the guy.

11. They HAVE To Address This At Men Tell All

How epic would it be if everyone on stage wore a salmon blazer during the Men Tell All episode? Looking at you, Chris Harrison.

12. The Season Has To End With A Salmon Blazer

If Hannah's final pick doesn't own a salmon blazer, it would just feel wrong. Better yet, he should wear one at the last rose ceremony. It would just bring everything full circle.

Will Hannah just forgo dating any of these guys and settle down with a salmon blazer instead? Probably not, but it's safe to predict that there life will include salmon blazers post-filming.

The Bachelorette can be an unpredictable show. You never know who's safe until the roses are handed out. However, a salmon blazer is something we can all depend on, at least this season.