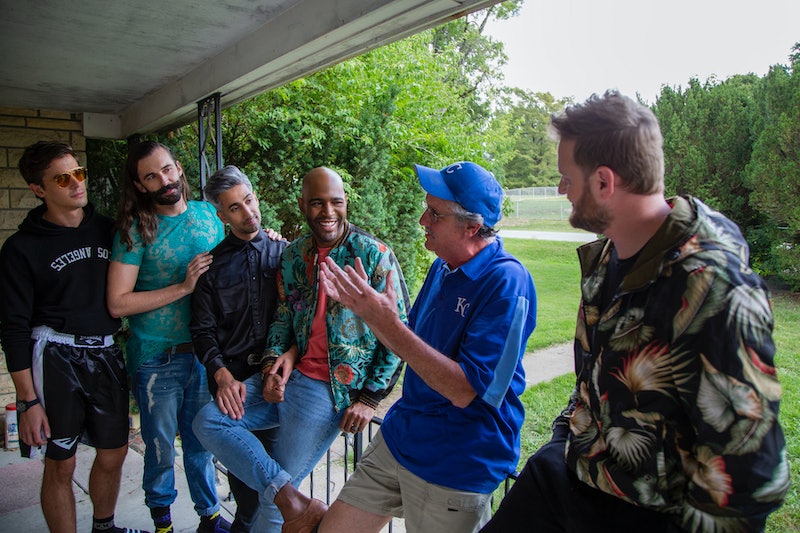 Every Queer Eye episode is sweet, but Kenny Yarnevich's Queer Eye episode was really sweet. Kenny is a retired bachelor living in Kanas City who bartends on the side at his local St. John's Catholic Club. Part of the Fab Five's mission for Kenny was to help him get his house in shape for visitors, because his big Croatian family wanted to be more a part of Kenny's life. Now, after Queer Eye, Kenny seems to still be doing what he loves.

Kenny is not on Twitter or Instagram. His Facebook hasn't been updated since 2011. He's not really a social media guy. He enjoys the simpler things like bowling, bartending, spending time with family, and hanging out at the Catholic Club. And while it's hard to tell how Kenny's been based on social media, the Catholic Club's web presence gives a few hints. On the club's site, Kenny is listed as the president. That means he's likely to have been involved in the club's recent events. They had a bowling tournament in February followed by a dinner for Lent. They also celebrated Croatian Day with a picnic in June. Now, he's likely prepping for the 2019 Croatian Festival on Aug. 17. The club's website says the celebration will take place after church that day and includes "music and dance, food and traditions" as well as raffle and boutique items for sale.

If food is being served, it's possible that Kenny will be the one serving it. The Fab Five found that he's often behind the bar at the club, serving the patrons with a smile. Kenny is such a staple of the bar, actually, that he's received rave reviews on the club's Facebook page over the years. "You will never find a nicer guy the Kenny," one reviewer wrote. "It is always a pleasure to spend [some time] with him." Another added, "Kenny was a great host." A third person chimed in, "Kenny is always super helpful and a joy to be around."

If Kenny was on Facebook, it would likely warm his heart to see that the club's patrons love him so much. He's really poured his heart and soul into the venue over the years. "I used to work in sales for The Kansas City Kansan, the newspaper. Well, it shut down in 2009, as you know. So I took over management here at the club," Kenny told The Pitch in 2017. "I went to kindy-garten here, and my great-grandfather helped build the church. Anyway, I used my sales experience to promote the place. Got some business cards printed up and started distributing them down at the River Quay."

And while Kenny doesn't use social media, many of his family members do. Someone who is likely his sister-in-law posted a couple of photos in April of Kenny at what appears to have been his birthday party. One photo shows a candle-lit cake being brought to him. In the photo, he's still sporting the clean-shaven face Jonathan gave him on the show. Another photo shows that one of his gifts was a book about Queer Eye called Love Yourself. Love Your Life.

Kenny loved the Fab Five so much that he named his new dog after them. Fab Five the dog isn't in any of Kenny's birthday photos (they were taken at a restaurant where presumably dogs weren't allowed), but hopefully the duo is still doing great together. And from what can be found on the internet about Kenny, it seems like he's just enjoying his life at the Catholic Club and with his family, which is all he ever wanted.