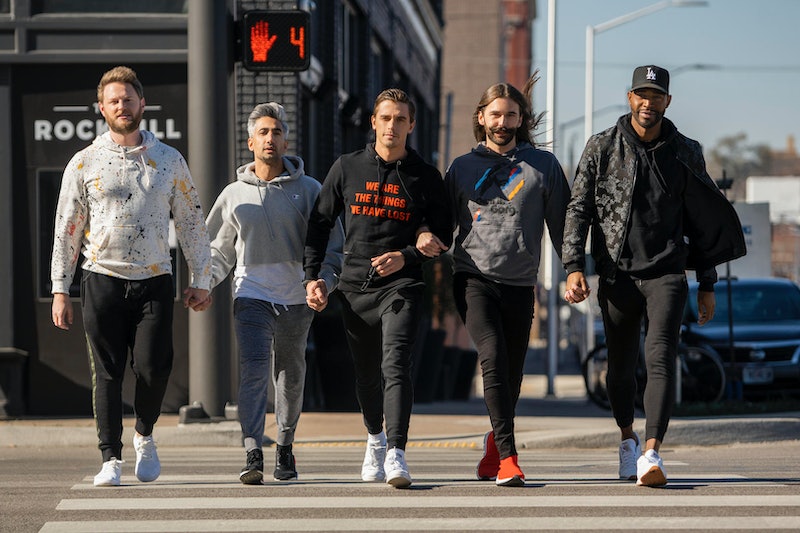 Right on the heels of Queer Eye's Fab Five appearing in Taylor Swift's "You Need to Calm Down" music video, the cast of Netflix's makeover show has a new announcement: Queer Eye Season 4's release date is way sooner than you think. Netflix revealed that Season 4 of Queer Eye will air July 19 in a press release issued on Tuesday, June 18, but there's more. Not only can fans expect to see even more of Antoni Porowski, Bobby Berk, Jonathan Van Ness, Karamo Brown, and Tan France on their screens before the summer is over, they can also look forward to even more content. Queer Eye was also picked up for Season 5, and they're going to a brand new town.

Per a Netflix press release obtained by Bustle, Season 4 of Queer Eye will take place in Kansas City, and Season 5, which will debut in 2020, will take the boys to Philadelphia. In a newly released graphic video celebrating this big announcement, the Queer Eye Fab Five are even joined by Gritty, the furry orange googly-eyed Philadelphia Flyers mascot that captured the Internet's heart when he first debuted in 2018.

Gritty's quick cameo in the Queer Eye video definitely hints at a cameo of the lovable fur-ball when the Fab Five hits Philly, but fans will have to wait until Season 5 premieres to watch that glorious mashup. Who knows, maybe they can even give Gritty a makeover while they're in town?

Season 4's July 19 premiere date will likely come as a surprise — a pleasant one — for fans of the feel-good reality show considering that Season 3 just came out in March 2019. It's as if the Fab Five knows that fans need them now more than ever, perhaps even more so than the actual heroes who receive inner-to-outer transformation on the show.

Now, before you start worrying about what you'll do between July's Season 4 and 2020's Season 5, fear not, because the Fab Five also has a special planned to come out later in 2019, set in Japan. Back in January, Netflix announced that a four hour episode will depict a "make-better" — the show's term for "makeover" — with a group of heroes in Japan, while the troupe experiences "Japanese cuisine, fashion, design, grooming and culture firsthand." That Japan Queer Eye special still doesn't have a release date, but it will likely come out a few months after Season 4 airs.

The Queer Eye Season 4 in Kansas City will likely feature the show's customary medley of compassion, encouragement, and transformation. Since Season 3 also took place in the BBQ capital, viewers already have a good idea of the kind of feel-good entertainment that's coming in July. After all, Season 3 gifted the world with unforgettable heroes Jess Guilbeaux, the Jones sisters, and more, so it's likely that Season 4 will have more amazing heroes and challenging stories ahead.

For as busy as the Fab Five is, between Taylor Swift video cameos and performing at music festivals, it's clear that they're still making ample time to film Netflix's Queer Eye. Fans will likely exclaim a giant "Yas Queen" out of appreciation for that.