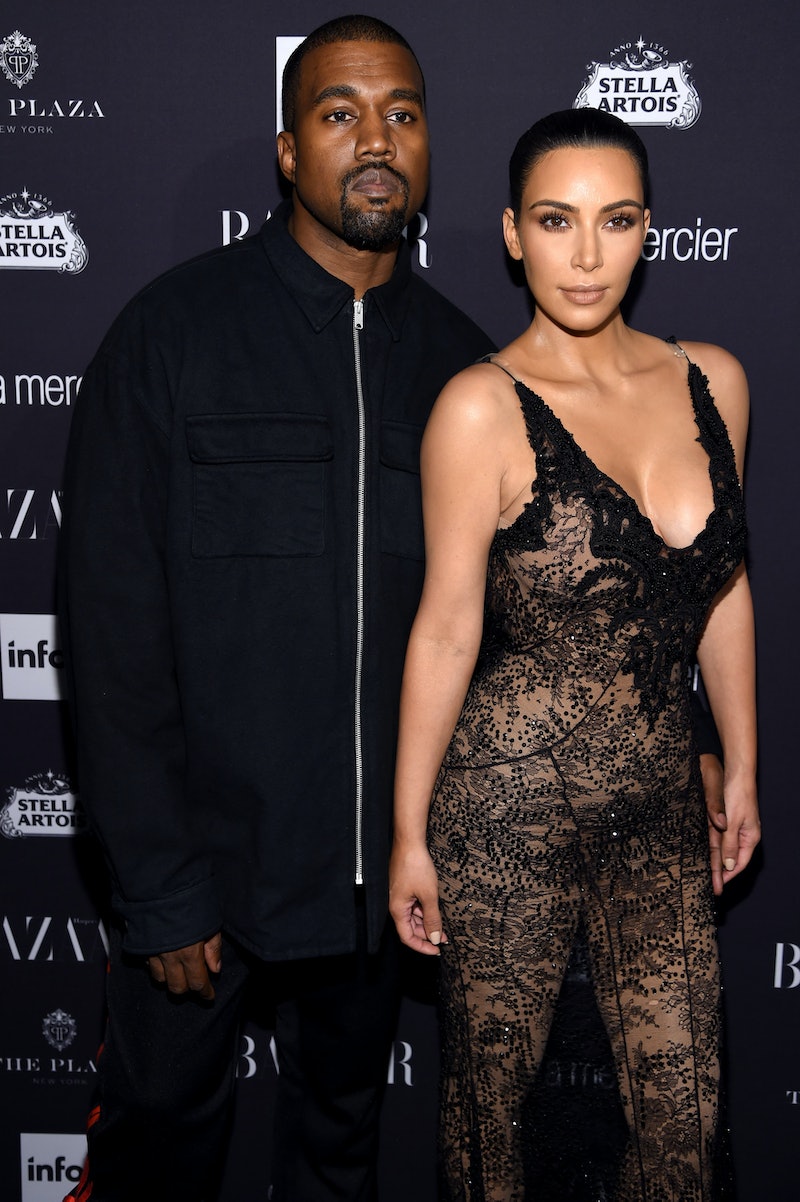 If you're hoping Kim Kardashian and Kanye West will announce the name of their new baby girl soon, don't hold your breath. Kim and Kanye's new baby doesn't have a name yet, according to West himself. As the Daily Mail reports, while out and about in Los Angeles Wednesday, paparazzi inquired about the baby's moniker, to which the rapper replied, "Can't think of a name!" The Daily Mail reported that a photographer suggested "Donda" as way to honor West's late mother, who died in November 2007. West reportedly replied, "Oh, that's fire."

The Blast also reported Wednesday that "sources close to the Kardashian family" said West wasn't joking when he said, "Can't think of a name!" Per The Blast, the entire Kardashian family doesn't know what Kimye is thinking, because they are "still trying to decide" on a name.

On Monday, Kardashian and West's third child arrived via surrogate. The Selfish author confirmed the news on her website Tuesday with a sweet message titled, "She's Here!" Their daughter arrived on Jan. 15 at 12:47 a.m. and weighs 7 lbs., 6 oz. "Kanye and I are happy to announce the arrival of our healthy, beautiful baby girl," she wrote. "We are incredibly grateful to our surrogate who made our dreams come true with the greatest gift one could give and to our wonderful doctors and nurses for their special care. North and Saint are especially thrilled to welcome their baby sister."

When Kardashian appeared on The Ellen DeGeneres Show in November 2017, she talked baby names with the daytime talk show host. At the time of her episode was filmed, they still hadn't settled on a name. "We're freaking out," Kardashian told DeGeneres. "We have no name." She even had her baby shower guests write down possible names. "At the baby shower, I was like, 'I just want everyone to write a name on a little tile and see if there is something that sticks,'" she revealed, but nothing stuck.

Of course, DeGeneres offered her services and used her Baby Name Generator to help Kardashian choose a name, but she wasn't feeling any of them, including Star West. "I'm not gonna name her Star," despite her eldest daughter, North West, loving that name. As she explained to DeGeneres, "[North] has a toy, a llama. She named it Star West. She names everything Star West." Maybe North and her brother, Saint West, will help their mom and dad come up with another name for their little sister.

There's a good chance their third child will also be without a "K" a name, just like North and Saint. As Kardashian revealed in a 2013 Keeping Up With the Kardashians episode about using a "K" name, "If we name our kid with a K name, which is kind of what we want, mainly just because Kanye and I are K's, then they're going to call us the KKK." That's certainly something to avoid, which is probably why they went with North and Saint.

In September 2015, Kardashian also spoke with DeGeneres about naming her second child. They had yet to choose Saint, but the reality star said, "I do like the name Easton, Easton West. I don’t think my husband likes that name, but I do like it." She added, "I don’t think we’ll go another direction. It’s definitely not South, every time someone says South, I just want to roll my eyes. It’s not a good direction."

Funnily enough, Kardashian also told DeGeneres the following: "I start thinking [about names] at about eight months, so I’m about a month away." Who knows if that's the case with their new baby girl, but, if so, it doesn't seem like they've settled on a name just yet, as West was kind enough to reveal.