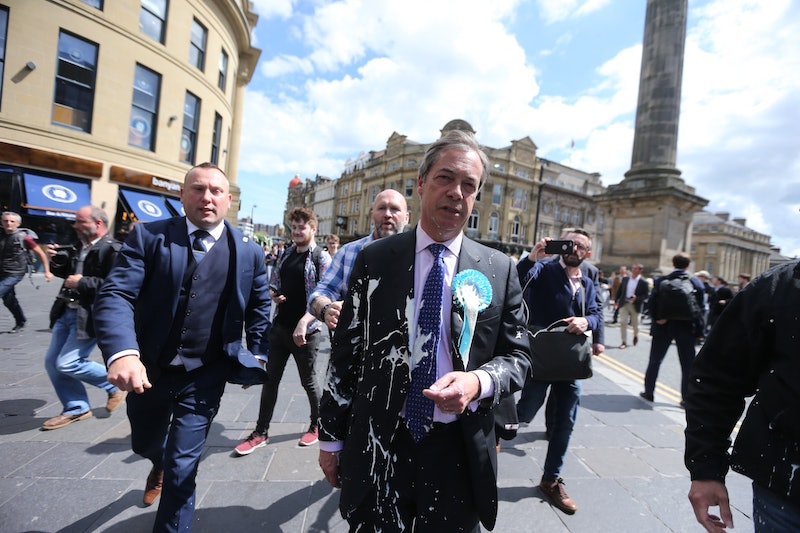 The humble milkshake, once a symbol for what brought the boys to Kelis' yard, it is now a symbol for protesting against far-right politicians in the UK. The sweet dairy beverage is being hurled at politicians up and down the country in public spaces, with Brexit Party leader Nigel Farage being the latest person to get swirled with the lactose drink in Newcastle. But what is milkshaking and how did throwing this drink become a mechanism for political protesting?

Milkshaking is essentially just aiming a milkshake at a controversial political figure in public in an attempt to humiliate and embarrass the recipient. It's becoming so popular that a McDonald's in Edinburgh had to stop selling milkshakes ahead of a Nigel Farage pro-Brexit rally, the Guardian reports.

Milkshaking first grabbed the nation's attention in April. Twenty-three-year old Danyaal Mahmud was walking through Warrington when he joined a protest against English Defence League co-founder Tommy Robinson. Speaking to the Observer Mahmud said: “The first time he approached me, he asked me if I thought he was racist and I said: 'yeah.' Then he says: ‘do you know 80 percent of grooming gangs are Muslim?’ I go to him, ‘that’s a false statistic there, what about white paedophiles? Why are they not called Christian grooming gangs?’ — and then he goes off on one.”

On his return back from a meeting, Mahumd was met by Robinson and his supporters, so, with a McDonald's milkshake in his hand, Mahumd hurled the drink in Robinson's face. As the Guardian reports, this was one of two milkshakes thrown over two days at the controversial figure who has been kicked off Facebook for violating hate speech policies, per iNews. UKIP candidate Carl Benjamin, who as the Guardian reports is currently under investigation for Jess Phillips rape comments, has also had a milkshake thrown at him multiple times. And now Farage is the latest politician to be doused in the milky drink (Five Guys' banana and salted caramel this time).

But it's not just milkshakes. "Egg Boy" rose to fame after dashing an egg at the head of far-right Australian politics Fraser Anning, who had reportedly stated that Muslim immigration was the cause of the horrific Mosque attack in New Zealand, the Evening Standard writes.

Food has historically been used as a mechanism for political protest, mainly because it's cheap, widely available, and visible. Speaking to HuffPost, Dr Benjamin Franks from University of Glasgow explained that food has often been used out of convenience. "Throwing food has frequently been a sign of disrespect — take the lobbing of rotten fruit at miscreants placed in the pillory or stocks.”

But many have criticised the new trend of throwing lashings of lactose at public figures. Brendan Cox, widower of politician Jo Cox, spoke out against milkshaking, saying on Twitter:

I dislike Nigel Farage's politics profoundly. His willingness to pander to hatred & division even more so. I don’t think throwing stuff at politicians you disagree with is a good idea. It normalises violence and intimidation and we should consistently stand again it.

But with the European Parliament Elections around the corner, it seems unlike the milkshaking will stop any time soon.

More like this
How To Follow The New Royal Family Social Media Accounts
By Sam Ramsden
Adele’s Boyfriend Was “Livid” Over This Fan Interaction At The Singer’s Show
By Sophie McEvoy
Mollie King & Stuart Broad Just Shared The First Pic Of Their Baby
By Sophie McEvoy
'Waterloo Road' Is Back, With More Than A Few Familiar Faces
By Sam Ramsden and Vivian Iroanya
Get The Very Best Of Bustle/UK