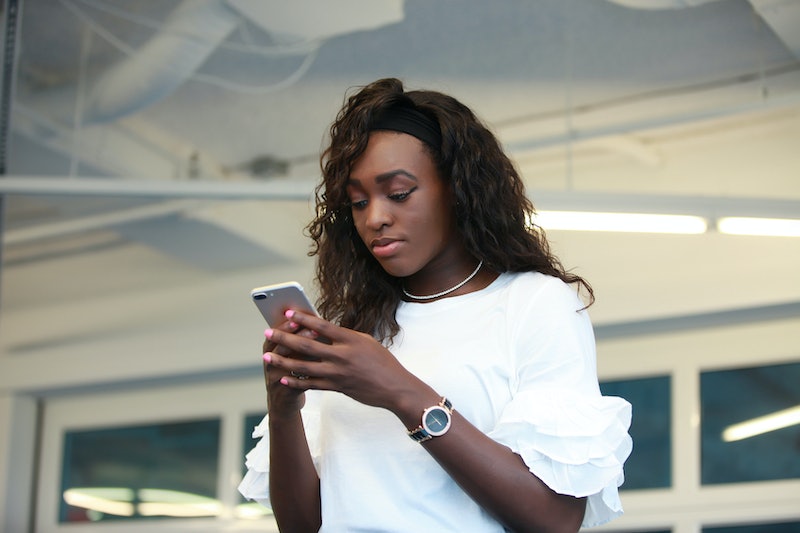 Donald Trump has been using Twitter as his own personal megaphone for quite a while — but today, "Mute Monday" might change that. Just what is "Mute Monday" on Twitter? Many people are moving to unfollow both of the accounts Trump is currently tweeting from, instead using that online real estate for people and organizations who are fighting the good fight. While unfollowing someone on social media may seem inconsequential, let's not forget that Trump used Twitter as a key part of his campaign platform. Taking away Trump's Twitter megaphone makes a statement that although he's of course free to keep talking, not everyone has to listen.

Feminist newsletter Signal Boost sent out a call to action on Sunday for people to unfollow @realDonaldTrump and @POTUS and instead follow someone who is working toward something they believe in. According to Cosmopolitan, Signal Boost suggests following an organization "dedicated to protecting reproductive rights, or keeping families together and safe from deportation, an elected leader you want to hear from in 2020, a local progressive candidate who's running to protect her community. Your choice." Once you've done that, share who you're following using the Mute Monday hashtag.

For me personally, it's a good reminder that while I may vehemently oppose Trump's policies, I also need to support and lift up those still fighting to protect my rights — and I'm sure I'm not alone.

Also, don't underestimate the power of a movement. Remember those Women's Marches Jan. 21 that Trump said wouldn't matter? They made an impact because so many people showed up. We need to keep showing up in order to continue to make that kind of impact, and this is an imminently doable way to do so.

People began taking to Twitter shortly after midnight to show their support for the movement flooding feeds with encouragement for uplifting people and causes, because after all that's what this is all about. Celebrities like Jamie Lee Curtis and Debra Messing joined in, and tweeted their support using the Mute Monday hashtag.

Need some help deciding who to illuminate today? There are tons of organizations tirelessly plugging away to ensure the rights of marginalized Americans are protected. Consider following one of these groups — or all of them, and a whole lot more besides!

America’s most trusted provider of reproductive health care for 100 years.

Putting a face to the fight for equality; taking a stand against bullying and discrimination.

The oldest and largest national legal org committed to full civil rights for LGBTQIA people & everyone living with HIV in the United States.

Fighting for fundamental fairness and due process for all immigrants.

VIDA is "a non-profit feminist organization committed to creating transparency around the lack of gender parity in the literary landscape and to amplifying historically-marginalized voices, including people of color; writers with disabilities; and queer, trans and gender nonconforming individuals." Always relevant, but more needed now than ever.

Once you're done with your "Mute Monday" mission, here are 100 ways you can fight back during Trump's first 100 days in office. This is a marathon, not a sprint, and every little bit counts.