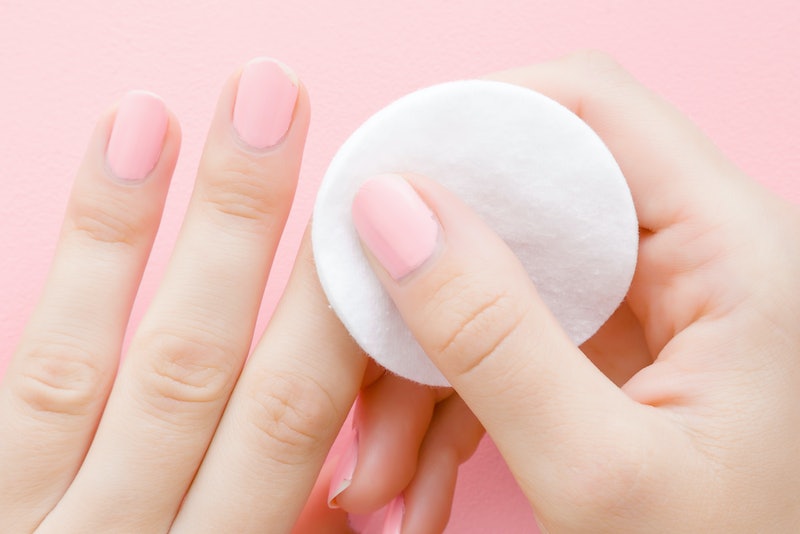 Having freshly painted nails is one of the smallest pleasures in life. Having to remove that nail varnish is sadly not. Whether it's the intoxicating (and not in a good way) smell of nail varnish remover or its general messiness, people have long thought that there has to be a better way. Well, according to beauty brand The Sign Tribe, there is. Made up of a group of "creative, experienced beauty professionals," the Frankfurt-based company has recently unveiled a nail polish remover cream. And the positive reviews are rolling in.

If someone told you that a fresh-scented, relatively mess-free cream could swiftly remove your polish, you'd probably roll your eyes. But that's reportedly exactly what The Sign Tribe's Remove and Chill Nail Polish Eraser Cream does.

The product is being billed as the world's first non-acetone nail remover cream, reports The Sun. Acetone is typically regarded as the most effective varnish removal ingredient, states Self, but it can be harsh on the nails, removing natural oils from the skin. For those whose nails are already dry or splitting, it's not the best idea.

Lynn Gray, expert from nailcare brand Mavala, confirmed this detrimental effect to the Telegraph, adding: "Fingernails grow by three millimetres a month, so it can take four to six months to recover from this damage.”

Anything that doesn't include acetone but still works well is practically a miracle. The Sign Tribe's cream may just be that as it has swapped acetone for a milder solvent called propylene carbonate. Its formula also boasts nourishing macadamia, almond, and argan oils along with nail-boosting vitamin E. A writer for beauty site Byrdie described it as "skincare and polish remover intertwined."

What's more, the cream comes in a travel-friendly tube, allowing you to use it whether at work, at home, or even on public transport if you really need to. At £14.25, it's not the cheapest nail varnish remover you'll ever buy, but it could well be the most worthwhile.

To get the best result from the cream, The Sign Tribe recommends applying a thick layer to nails, leaving it on for between one and three minutes (depending on how many layers of varnish you're wearing). Then massage into nails before removing with a cotton pad. The only thing to remember is that the cream won't work on gel or shellac nails. Oh, and don't forget to wash your hands after each use.

"It's quite shocking how well natural oils remove the darkest and most stubborn colour I own," the Byrdie reviewer wrote. "My only gripe is that it does get slightly messy at first, so you'll need a few cotton rounds at the ready to clean up the spread pigment. Another slight downside is that it doesn't remove gel manicures (you need acetone for that), though the brand tells me it's in the process of trying to find a solution for that too, so stay tuned."

The Sign Tribe's solutions-focused aesthetic has pleased plenty of beauty fans too. The team at Refinery29 tried to remove a bunch of tough nail varnishes to see how well the cream really worked. "No matter what kind of polish we threw at Remove and Chill, it met the challenge and left our nails looking hydrated and healthy," they concluded.

Customers confirmed that it removed varnish that would normally have taken two or three attempts and didn't leave staining on the skin. "This is an expensive product that I normally would not splurge on, but I will make the investment in this product because I love it so much," one added.

The odd negative review aside, this cream really does seem like a revolutionary addition to the beauty department.