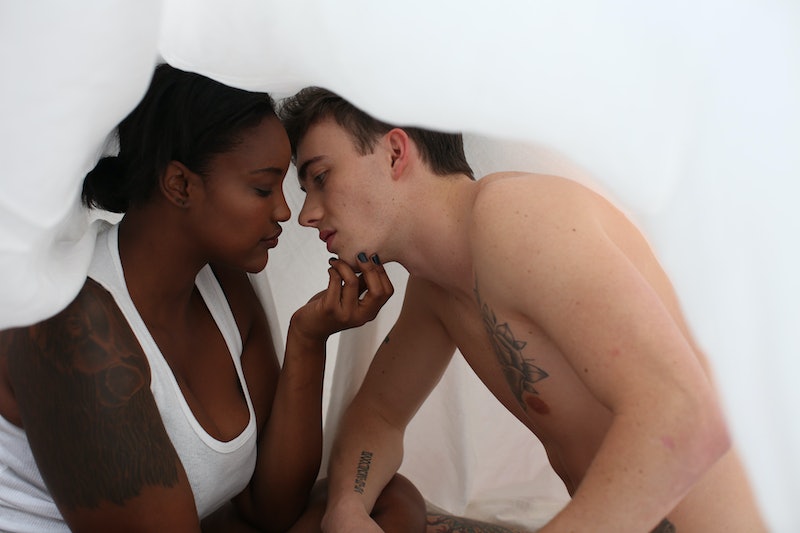 There's a lot of talk about different kinds of sexual intercourse and different ways to have it, but there's not so much talk about outercourse. So what is outercourse? Well, it's crucial for a lot of women in order to orgasm, research finds. And we're talking a lot of women. Debby Herbenick, director of the Center for Sexual Health Promotion at Indiana University and a research fellow and sexual health educator at the Kinsey Institute, looked at data from 1,055 women ages 18 to 94. The data found that only 18.4 percent of respondents said that intercourse was enough for an orgasm. The rest needed something more — which brings us to outercourse.

Outercourse is everything that doesn't involve penetration— so we're talking massaging, vibrators, touching, and, of course, clit play. Around 36 percent of the women studied said said they needed clitoral stimulation in order to orgasm during intercourse, and, for another 36 percent, while they didn't need it, they said it enhanced the experience.

But we still don't talk about how necessary it is for a lot of women, partly because we don't prioritize female pleasure enough as a culture. "I think many people equate intimacy with the in-and-out of sex," Amy Levine, sex coach and founder of Ignite Your Pleasure, tells Bustle. "It's often due to lack of relationship role models to teach them about true intimacy and lack of sex ed. Instead many people learn through trial and error and may not have a better understanding of what it takes to have better sex until the info pop ups on the web or social media to educate them."

We Need To Stop Implying Intercourse Is The Main Event

Why is the rhetoric important? Isn't outercourse basically just foreplay by other name? Well, when we divide things into foreplay and intercourse, it's implying that intercourse is the main event. You both get revved up during foreplay, then comes intercourse and orgasm, then cuddling/high-fives/eating pizza. Right? Wrong. So many people don't work that way. They need vibrators or mutual masturbation or just for someone to go down on them for 15 minutes. But our emphasis on the foreplay-then-sex-model means that if you don't fall into that pattern — if you don't orgasm during intercourse— you feel like something's wrong with you. Which is insane, because so many people don't come during intercourse. Why should they feel ashamed when it's totally normal?

"Think about sex being a small part of SEXuality. Communication, knowing what you like through solo sex, experimenting with things like sex toys, G-spot stimulation etc, taking care of your sexual health are a few of many 'out of the box' options," Levine says. And they're just as valid as any other part of your sexuality.

Not to mention the patronizing homophobic nonsense that the foreplay/sex divide breeds. Years in a lesbian relationship has made me see how often people refer to lesbian sex as 'not real sex' or imply that is 'just foreplay'. As a culture, have a huge obsession with PIV penetration as the only thing that 'counts' as sex. But for a lot of women, they can't orgasm that way. That's why we need better rhetoric — and why outercourse is such a better term than foreplay. Some people like intercourse, some people like outercourse. Equal, but different. And both totally pleasurable and totally cool.

We're starting to move beyond antiquated sexual stereotypes, but our language needs to catch up with our understanding. So let's hear it for outercourse.

More like this
My Partner Wants Me To Wear A Diaper During Sex. Help!
By Sophia Benoit
12 Active Date Ideas That'll Get You & Your Boo Outside
By Lexi Inks
12 Aphrodisiac Desserts To Spice Up Your Valentine’s Day
By Kaitlyn Wylde
5 Signs You Have A Toxic Relationship With Yourself
By Lexi Inks
Get Even More From Bustle — Sign Up For The Newsletter
From hair trends to relationship advice, our daily newsletter has everything you need to sound like a person who’s on TikTok, even if you aren’t.