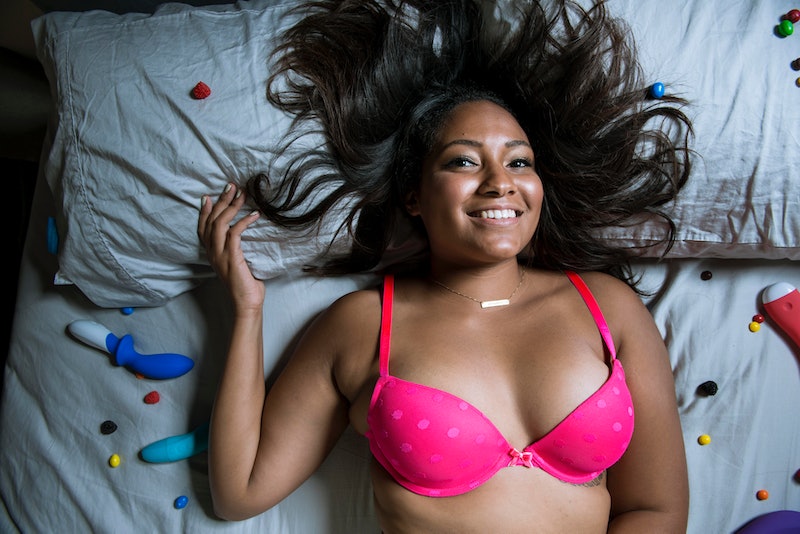 As far as orgasms are concerned, the vaginal orgasm still remains extremely elusive for many. The reason for this is because, according to statistics, 75 percent of women need clitoral stimulation to orgasm, meaning only 25 percent of women can experience that aforementioned elusive vaginal orgasm through penetration alone. You know, because achieving an orgasm isn’t already hard enough for some women.

“By no means do I want women who cannot have an orgasm during vaginal intercourse to feel shame or think they have a sexual problem,” Holistic Sexologist and Sexuality Educator, Lisa Hochberger, tells Bustle.

But the good thing about orgasms is that we’re not limited to just one type — as evidenced by the vaginal orgasm. According to research, there are over 10 types of orgasms that women can experience, including kissing orgasms, mental orgasms, coregasms, and even childbirth orgasms, just to name a few. All of which are great news for those who struggle with either the clitoral or vaginal orgasm, because, hey, more avenues to “get there,” as they say.

But what about having a vaginal and clitoral orgasm at the same time? Is that a possibility? Short answer: Yes. It's called a blended orgasm. What it comes down to is knowing your body, experimenting, and communicating with your partner.

Here are seven tips on how to experience a clitoral and vaginal orgasm simultaneously.

When it comes to having a clitoral and vaginal orgasm at the same time, if your partner has a penis, their size probably doesn't matter all that much. “Despite the popular rumor that ‘size matters,’ many researchers like William Masters and Virginia Johnson have found that penis size has few implications on a woman’s ability to achieve a vaginal orgasm,” says Hochberger. “I am not telling women that penis size has no value to them; some women will tell you it does. Penis size may be arousing and/or stimulating to some. However, penis size isn’t the magical weapon behind a vaginal orgasm.”

Besides, even if your partner isn’t well-endowed, there are more than a few satisfying sex positions for small penises.

2. Find Your G-Spot And Get To Know It Well

A lot of women struggle to find their G-spot. “The G-spot is located two inches inside the vagina, on the topside of the vaginal wall, and has a spongy texture,” Sex Therapist and Sexologist, Stefani Threadgill, tells Bustle. “To find the G-spot, insert two fingers, palm-up, with a ‘come-here’ motion, and press up against the front wall of the vagina. The G-spot responds to direct pressure.” Once you’ve found it, experiment with it and what type of pressure feels good.

3. Figure Out The Distance Between Your Clitoris And Vaginal Opening

While this one may sound a bit perplexing and may even force you to ask, “Does it matter?” I can tell you right now that it does. “Research has found that women who have a clitoris that sits closer to their vaginal opening have a greater chance of achieving orgasm than women who have a larger distance between these two body parts,” says Hochberger. “The ‘rule of thumb’ states that women with an ideal distance of about one inch (or a thumb’s distance) between their vaginal opening and their clitoris will have a better chance of achieving this form of orgasm.”

But Hochberger is also quick to add that if the distance between your vaginal opening and your clitoris isn’t “ideal,” there’s no need to worry. It’s just a matter of experimenting with different sexual positions that will lead to the right amount of clitoral stimulation for you.

4. Reintroduce Yourself To Your Clitoris

While you probably know where your clitoris is, because it’s far more obvious than your G-spot, how much do you really know about it? “The clitoris has 8,000 nerve endings, twice that of the head of the penis,” explains Threadgill. “Only the clitoral head and the hood are external. Internally, the clitoris has ‘legs’ that wrap around the vaginal opening and vagina; massage or pressure on the labia can enhance the sensation.”

And all this time you may have been thinking it was just that little exposed nub, huh? Au contraire mon frère! With this knowledge in your pocket, you get a deeper understanding of how the clitoris works and what you need to get off.

7. Use Manual Clitoral Stimulation During Intercourse

If using toys isn’t your scene, then it’s all about manual stimulation of the clitoris and the G-spot simultaneously. In order to achieve a clitoral and vaginal orgasm at the same time, your focus, and/or the focus of a partner should be on these two parts of your body. Whether your opt for your partner to use their fingers while licking your clitoris or penetrate you while stimulating your clitoris with their fingers, these are techniques that will, hopefully, allow you to experience the phenomenal clitoral and vaginal orgasm.

However, as Hochberger points out, if you can’t can’t achieve a blended orgasm, don’t freak out. Don't let your mind go to a dark place — there are so many ways to feel good in bed. Ultimately, what it comes down to is exploration, communication, and lots and lots of practice.