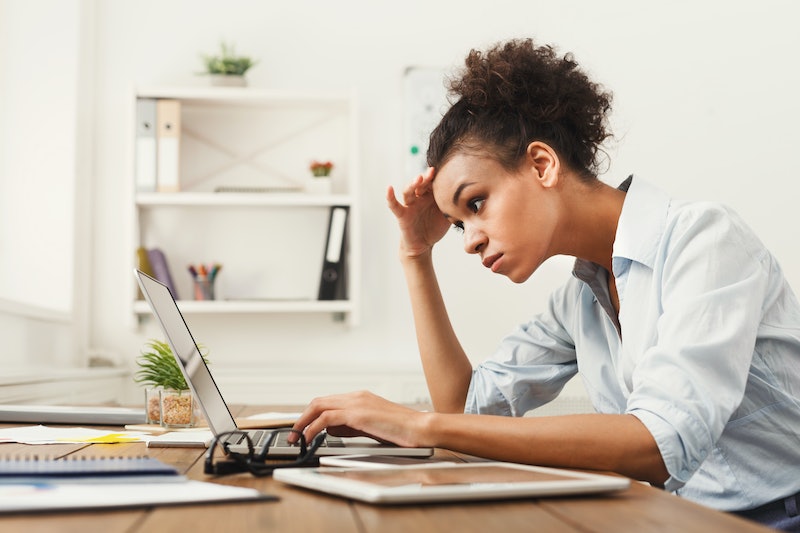 In a work obsessed culture, there's a seemingly endless supply of threats to your wellbeing; one such threat commanding headlines recently is presenteeism. So what is presenteeism? According to the BBC, it's the tendency to go into work "when you're really not up to it" — and experts have warned it could pose a major risk to your health.

As the BBC notes, a recent report by human resources association the Chartered Institute of Personnel and Development (CIPD) found that 83 per cent of its respondents (all human resources professionals) had noticed presenteeism in their workplace. A quarter said the issue was worse this year than last, while a frightening 63 per cent said they'd observed employees using their holiday leave to work (known as 'leavism'). And presumably not coincidentally, 37% of businesses saw stress-related absences among their employees rise over the past year, the report found.

The latest CIPD report saw employees take the lowest number of sick days in the 19 years since the survey was launched — only an average of 5.9 per employee per year. Given the report's findings, it sounds likely that presenteeism played a role in that decline.

In January 2018, private healthcare group Bupa released a study finding that 64 per cent of UK employees had gone to work while unwell in the preceding year, with 27 per cent ignoring direct orders from their doctor to stay at home. 29 per cent of respondents said they'd gone to work despite grappling with mental health issues like depression, while a third went in while dealing with back or joint pain.

As Stuart Haydock, Bupa's resilience lead, pointed out, presenteeism could compromise your long term health. "As with most conditions, early diagnosis and treatment improves the chance of a faster recovery," Haydock said.

The onus to combat presenteeism, however, shouldn't be on employees, many of whom don't have the privilege of job security, but on employers who foster an unhealthy workplace culture — and more broadly, a society that values productivity above human wellbeing, and preferential outcomes over the people who work to create them.

Indeed, 13 per cent of respondents to the Bupa survey said they went to work when they were ill because they feared losing their job, while 20 per cent said their workload was too large to allow them a day off. 26 per cent worried their team would be unduly burdened by their absence, and 16 per cent said they worried people at work would think they weren't really ill. That's a pretty strong indication that the problem isn't with overly keen employees who don't value their own health, but with a work culture that tells them to compromise it to protect their job.

According to the CIPD report, only half of managers appreciate the importance of their employees' wellbeing, while only 32 per cent of respondents to the survey said senior leaders in their workplace "[encouraged] a focus on mental well-being through their actions and behaviours." Again, that's pretty damning, and leaves little doubt about where the responsibility for employees' presenteeism really lies. (If you are fortunate enough to work in an environment that prioritises your wellbeing, however? Listen to your doctor: don't go to work when you're ill.)