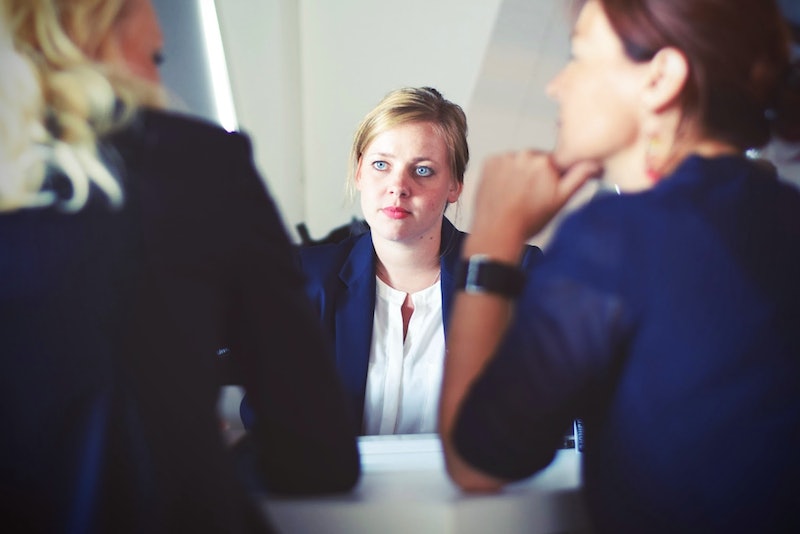 A few months after learning she wouldn’t be moving on to the next round of the recruitment process for a position with Toggl, a website that offers online time tracking for small businesses, Laurel Wright, 31, received a branded t-shirt in the mail. This is just one example of what millennials are calling ‘rejection swag’ — branded goods that companies give out during the hiring process to take the sting off, well, rejection.

According to Evelin Andrespok, HR Manager at Toggl, the company implemented a skills test to screen applicants a few years ago. The company, which operates on a full remote basis, sends to the shirts to everyone who earns a high score on the test.

“I think the motivation [for sending the shirts] … is to just appreciate the people who take the time and effort to be interested in us. And also, there’s a small part that is a marketing element,” Andrespok tells Bustle.

It worked. Wright, a Los Angeles entrepreneur now living in Berlin, posted a photo of the shirt to Facebook, effectively publicizing Toggl and the idea of ‘rejection swag’ in general. To her, the gift was a pleasant surprise.

Erik Fabian, founder of the website Upright Brand, disapproves of ‘rejection swag’ proper and says that it leaves an “‘I went to this theme park and all I got was this lousy t-shirt’” impression.

“I just think it’s the wrong time to give something like that,” he tells Bustle. “You want the thing you give to reflect your brand effectively … and then you want to give it at a moment when it’s relevant to who you are and what you stand for.”

Fabian says that the idea that a gift will soften the blow of rejection is misguided. “I think that is not the kind of association — the point of rejection — that you want to remind people about. Nor would I think the person receiving the swag at that point wants to show off something that kind of reflects that.”

Though Toggl offers the shirts to everyone who achieves a certain score on their screening test — even if they advance to the next round — SEMrush, a digital marketing company, used to offer free trials of their software to candidates who didn’t make the cut.

“These gifts were offered at the final stage of the hiring process, i.e. after the personal interview,” Olga Andrienko, the company’s Head of Global Marketing, tells Bustle via email. “If we felt like the candidate was a qualified and competent person but for some reason couldn’t be hired by us at that time, we offered him [sic] the promo code.”

She says applicants appreciated the free trials of their service. “Many companies don’t even call the applicants after the interview to inform that they were rejected,” writes Andrienko. “These gifts were a sort of ‘thank you’ to people who wanted to work with our company.”

David Everett Strickler, a creative marketing and branding consultant, felt that the bag of soaps and lotions he received after an interview with Molton Brown, a British luxury bath and body brand, demonstrated an appreciation of his time and efforts. Towards the end of the interview, both parties realized it wasn’t the right fit for either of them, but the interviewer showed him around the office so he could choose some products to take home.

“To be honest, it was a very visceral moment because it was like we both were adults in the sense that we’re like, ‘Okay, this isn’t going to work out’ ... but it was kind of nice. I don’t look at getting that stuff as a way of [saying], ‘Well, here’s a consolation prize for trying,’” says Strickler.

Though a spokesperson for Molton Brown says that giving away products isn’t standard practice, it supports to Erik Fabian’s emphasis on appreciation gifts as part of a great candidate experience, not compensation for an unpleasant one.

Wright says she would recommend applying for a job with Toggl if the right role came up because they’re a progressive company. “You know, the worst that could happen is you get a t-shirt. That’s a lot more than what you could say for other jobs.”

Hear that companies? Millennials may not need participation trophies, but they sure don’t hurt.

More like this
Poshmark Vs. Depop: How The Reselling Apps Compare
By Emma Carey
Why Are TikTokers Slapping Each Other With Tortillas?
By Courtney Young
6 Abortion Advocates To Follow On TikTok
By Sara Youngblood Gregory
How to Delete (or Pause) Your Hinge Account
By Emma Carey
Get Even More From Bustle — Sign Up For The Newsletter