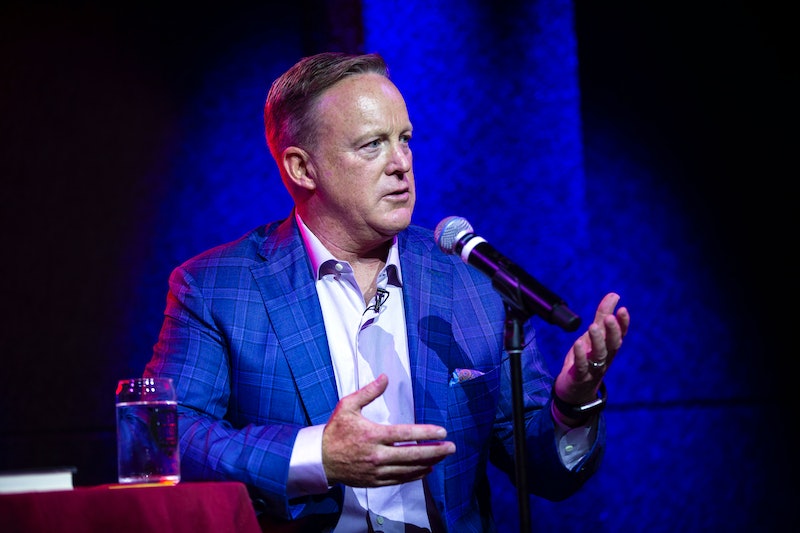 Sean Spicer, the former White House Press Secretary and Communications Director for the Trump administration, is joining the cast of Dancing With The Stars this season. Because why not, right? In 2019, it seems like nothing is sacred — especially anything attached to the Trump White House. With his press briefing days behind him, audiences may find themselves curious about what Sean Spicer's job even is now, since it can't be easy to find a gig after holding one of the most infamous jobs in the country in recent years.

Despite his fellow cast members coming to his defense, Spicer's casting on DWTS has raised some controversy among fans given that he admitted he lied to the American people on behalf of the President. Although he may go down in history for his job performance back then (and for inspiring one of the greatest impressions to ever grace Saturday Night Live), Spicer has moved on to plenty of new jobs since his time in the White House.

In fact, Spicer has picked up so many new jobs that it can be hard to keep track if you're not seeking out updates in Spicer's life (and why would you?) — but here's what he's been up to since he left the podium of the White House briefing room.

Since then, Spicer has spoken for investment bank Rodman & Renshaw, per Politico, as well as Liberty University and Harvard's Kennedy School.

In 2019, Spicer joined ExtraTV as a D.C. correspondent, conducting interviews with Secretary of State Mike Pompeo, counselor to the President Kellyanne Conway, and even his White House replacement, Press Secretary Sarah Huckabee Sanders. His ExtraTV stint was short-lived, with no new reports from him since February of 2019, but since then he's turned up on various other TV news programs, speaking on his time in the White House and the coming 2020 election.

Spicer's most politically-aligned work since leaving the White House has been as a a spokesman and senior adviser to American First Action, a Trump-aligned super PAC. Spicer may have left the Trump White house, but it's clear from his actions that he still fully supports a Trump White House and is fighting for Trump to win a second term in 2020.

While Spicer has plenty of irons in the fire, his appearance on Dancing With The Stars will provide him with a significant chunk of change. Variety reports the former Press Secretary will be making at least $125,000 and could make as much as $345,000 on the competition show. Spicer may not be working for this highest office in the land anymore, but financially it's safe to say he's doing pretty well for himself. Lying and all aside, of course.

More like this
At 28, Rosie Perez Risked Her Career To Stop Playing Stereotypes
By Gabrielle Bondi
'GoT' Star Emilia Clarke Says She "Just Can't" Watch 'House Of The Dragon'
By Brad Witter
This 'Bachelor' Contestant Got Back With Her Bachelor Nation Boyfriend After Going Home
By Grace Wehniainen
These 'Bachelor' Spoilers Suggest Christina Mandrell Is The New Villain
By Grace Wehniainen
Get Even More From Bustle — Sign Up For The Newsletter
From hair trends to relationship advice, our daily newsletter has everything you need to sound like a person who’s on TikTok, even if you aren’t.