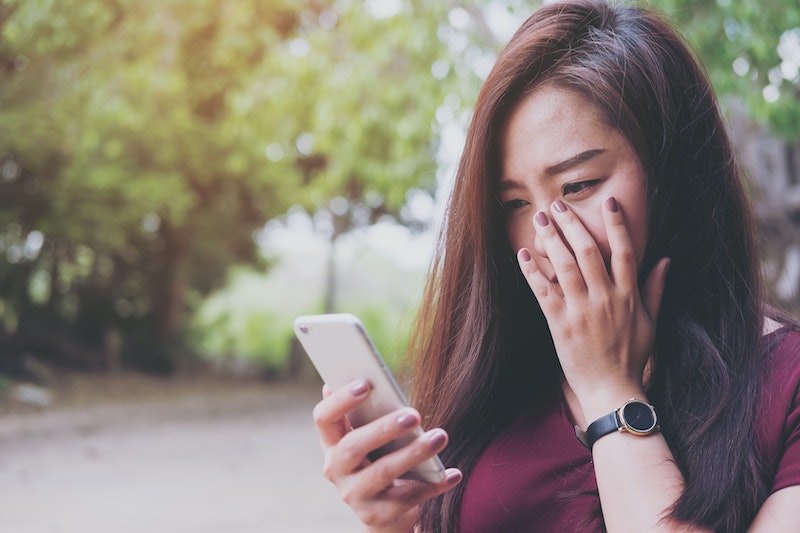 If you naively hoped that, as a society, we were done with the whole "giving cutesy names to bad dating behaviors" thing, I regret to inform you that yet another example has surfaced: the Metro has cleverly coined a term for a new dating trend: submarining. So what the eff is submarining? If you couldn't guess from its name, submarining is when someone you've been seeing/talking to vanishes without a trace (much like a submarine when it sinks to the depths of the ocean), then without warning, they "resurface" and slide back into your inbox like nothing ever happened. Infuriating, right?

It's actually pretty similar to another rude dating behavior called zombieing — aka when a person disappears, then comes back from the "dead" months later with some lame excuse justifying their prolonged absence. Unfortunately, submarining comes with an added layer of awful: after resurfacing, they'll offer no explanation whatsoever for their disappearance. That's right — no acknowledgment of their absence, no apology for leaving you hanging, not even a halfhearted attempt at an excuse ("sorry, I was in the shower!").

"People who submarine you either want to hide the reasons for disappearing or gloss over it," Jonathan Bennett, Dating/Relationship Coach and Owner of The Popular Man, tells Bustle. "I’d guess that, in most cases, they were dating or spending time with someone else and that fell through. Since they don’t want to admit the truth, whatever that is, they resort to submarining instead — and hope you fall for it."

Why Is Submarining So Problematic?

It's not exactly breaking news that modern dating comes with a lot of complications that past generations just didn't have to deal with — and submarining is just the latest example of how dating app culture can be problematic.

"Submarining behavior appears to be driven by entitlement and narcissism," Bennett says. "People who submarine you assume that they can just instantly jump back in your life as if nothing happened and without any consequences. It’s ultimately insulting because it implies that you have no other options and should be grateful to hear from them. If he or she stopped talking to you, then wants to reconnect as if nothing happened, it says a lot about that person’s lack of character and lack of respect for you."

"Submarining says a lot about that person’s lack of character and lack of respect for you."

When someone submarines you, it sends a clear message: they believe your time and your feelings are less important than theirs. It's pretty narcissistic for someone to have the audacity to disappear on you for months, pop up again, and expect you to be waiting to welcome them back with open arms, no explanation necessary. Not only is it massively disrespectful, but it's also confusing AF: if they weren't interested enough to maintain even a shred of contact, why would they suddenly want to date you now?

The answer is simple: they're bored, lonely, and assume you have nothing better to do than rekindle whatever connection you once had. TBH, that kind of entitlement has no place in dating — one person's feelings are no more or less valid than anyone else's — but if you find yourself the victim of submarining (which is all too likely these days), you have to figure out how you want to handle it.

What's The Best Way To Deal With Submarining?

When someone is being so blatantly disrespectful of you and your feelings, it's important to stand up for yourself. It might be tempting to immediately go off on them — but if you're at all interested in salvaging the connection, you're better off calmly asking for an explanation for their absence, instead of jumping straight into attack mode.

"If you’re being submarined, my advice is to not let the other person get away with it," Bennett says. "You don't have to confront [them], but definitely don’t play the game and pretend nothing happened. At the very least, find out the circumstances of why you didn’t hear from him or her. Before you can rebuild the relationship, it’s important to establish a base level of honesty and authenticity. If the person can’t do that, he or she doesn’t deserve your time and attention."

Depending on how your conversation goes, and whether or not the submariner owns up to their bad behavior, you can decide if you want to invest any more time into this person, or simply chalk it up to a lesson learned and move on. The good news? There are way more fish than submarines in the dating sea.