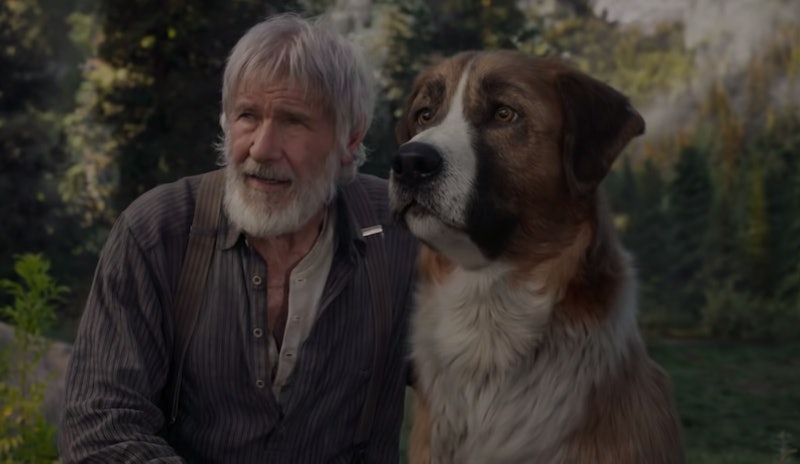 Fresh off of exploring a galaxy far, far away, Harrison Ford seems to have his sights set on a "new" far away frontier from a long, long time ago: the Yukon, circa the late 1800s to the early 1900s. What's more, he's not alone, as he's once again accompanied by another furry companion: Buck, a St. Bernard and Scotch Collie mix (who is actually CGI). Thus is the core pairing of The Call of the Wild, a nature adventure-slash-buddy flick premiering in theaters Feb. 21. Fans of classic American literature might even recognize the name, as The Call of the Wild is actually based on Jack London's fictional adventure novel, published in 1903.

The Call of the Wild follows London's original adventure fairly closely, tweaking a few aspects of the story along the way. Still at the center is Buck, a dog who is taken from his home and shipped off to work as a sled dog in the Yukon during the Klondike Gold Rush. The entire story is told from Buck's perspective, as he deals with harsh taskmasters and being shipped from place to place before finally ending up with a human who seems to genuinely care for him: John Thornton (Ford). Together, they explore the edges of the known world and beyond, getting into thrilling adventures and surviving brushes with death along the way.

London's story went on to inspire a number of other movie adaptations. A 1923 silent film starring Jack Mulhall was the first, followed by a Clark Gable and Loretta Young-fronted film in 1935. Then came another one in 1972 starring Charlton Heston, with the latest one premiering in 1997, starring Rutger Hauer. Whether or not this Ford-fronted epic will live up to those numerous adaptations remains yet to be seen. But with Ford in the lead, there's a good chance it will be a memorable film all its own.

More like this
Then Vs. Now Photos Of The 'Enchanted' Cast In 2007 & The Sequel's Stars In 2022
By Marina Watts
See 'Twilight' Stars Together Again For A Sweet Cullen "Family Reunion"
By Stephanie Topacio Long
'The Princess Diaries 3' May Go Ahead Without Anne Hathaway
By Darshita Goyal
Letitia Wright's Aisha Encourages A Vital Conversation Around Immigration
By Maxine Harrison
Get Even More From Bustle — Sign Up For The Newsletter