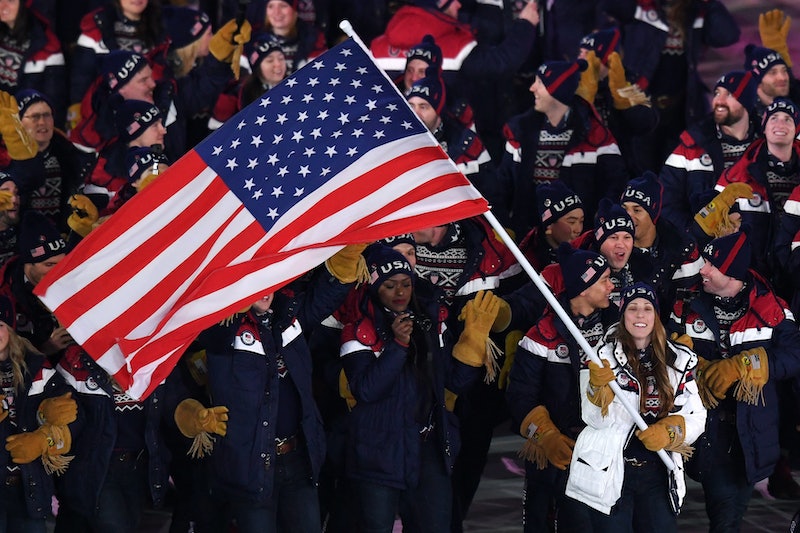 The 2018 PyeongChang Games will go out in style on Sunday, as athletes from 92 countries walk in the traditional closing ceremony parade. But as competitions wind down and athletes prepare to return home, Russians competing as neutral Olympic Athletes from Russia (OAR) continue to cause confusion. For example, what effect will they have on the order of the Olympic closing ceremony parade?

First, it's important to understand a key difference between opening and closing ceremonies. Whereas the Olympic opening ceremony includes a parade of nations in which athletes gather behind their national flag as a cohesive unit, the closing ceremony parade doesn't work like that. There is a so-called "parade of flags" at the closing ceremony, but each nation's flag is held by just one of its athletes, while everyone else walks in "en masse and in no particular order," as the International Olympic Committee (IOC) puts it.

Because of this set up, Olympic Athletes from Russia will blend in with everyone else. What's unclear is if Russia's flag will be permitted in the parade of flags. The athletes marched in the opening ceremony without so much as a Russian emblem on their uniforms, and the IOC hasn't yet decided whether the flag will wave in Sunday's ceremony.

The IOC officially suspended Russia from the 2018 Winter Olympics following allegations of state-sponsored doping. That ruling didn't seem so severe, though, when roughly 170 Russian athletes were allowed to compete as neutral. The IOC also said it will consider letting the Russian flag fly in the closing ceremony if the committee believes Olympic Athletes from Russia behaved in PyeongChang.

"There has to be a process. The end of [the] process is to look at the behaviour of the [OAR] athletes generally throughout the Games and that can only happen towards the end of the Games," IOC spokesman Mark Adams told The Independent. An IOC panel will make a recommendation to the executive board on Saturday, according to Adams. "They will look at the whether the spirit as well as the letter of the [IOC executive board] decision has been observed," he said.

Again, this decision will only apply to the parade of flags, as most Olympic athletes from all 96 countries stand together without flags at the closing ceremony anyway. If the IOC decides the Russian flag can't make an appearance, it simply won't have a spot in the parade of flags. It's unclear if a Russian athlete will carry the flag if it is permitted to fly; a volunteer from the Pyeongchang Organizing Committee led the neutral delegation at the opening ceremony.

Regardless of the decision on the Russian flag, though, the order of nations in the closing parade of flags is based on Olympic tradition. An IOC factsheet explains:

"The Greek flag opens the march, and the host country’s flag brings up the rear. Each flag is generally carried by an athlete chosen by his/her National Olympic Committee (NOC)."

Having Olympic athletes from every nation walk together in the closing ceremony is an interesting display of unity for a competition built around the idea that nations go head to head in various sports. As the IOC factsheet reads:

"The idea of having all the athletes parade in no order comes from a young Chinese man, JohnIan Wing, an apprentice carpenter in Australia for the 1956 Games in Melbourne. Before these Games, the athletes had always marched behind their flag-bearer, as at the Opening Ceremony."

The 2018 Games will officially end when the Olympic flame is extinguished at the end of the ceremony, and athletes will return home to show off their medals — including the Olympic Athletes from Russia who medaled in PyeongChang.