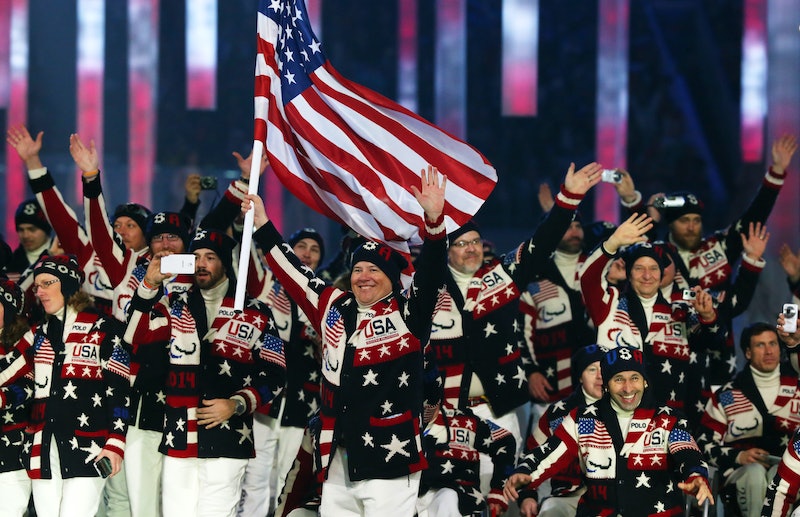 The 2018 Winter Olympics in PyeongChang, South Korea is finally here. Every year, the global event begins and ends with the Olympics opening ceremony and closing ceremony. Both are celebrations of the athletic games and include the athletes who are there hoping to win (or who have won) gold, silver, or bronze medals for their country. Really, what better way to kick off and end the monumental event than by having a giant celebration of everyone involved?

Some many be wondering what exactly happens at each ceremony, especially since both are pretty lengthy. So, here's a rundown of how they differ, and how there really is enough going on to make two separate ceremonies necessary.

The opening ceremony, obviously, represents the start of the Olympics, even though some of the events begin before the actual opening ceremony. As explained by CBS Sports, there is the traditional parade of nations, where athletes are grouped by country and march next to each other representing their nation as a unit. According to the International Olympic Committee (IOC), the parade is " in alphabetical order according to the language of the host country, except for Greece, which leads the parade, and the host country, which brings up the rear." The Greece flag is first, because that is where Olympics originated and where the first games were held.

The opening ceremony also acts as a way to celebrate the host city and its culture. For example, the 2018 Winter Olympics opening ceremony might include K-pop performances. "K-Pop is one of the most well-known and successful Korean cultures throughout the world," Lee Kyusang, who is in charge of honorary ambassador management at the Olympics, told CNN. "Appointing K-pop artists as honorary ambassadors has brought much attention to the games."

CBS Sports also reports the opening ceremony will include speeches from the International Olympic Committee and the Olympic Organizing Committee. But, most importantly, there is the raising of the Olympic flag and, of course, the lighting of the Olympic flame, which will remain burning until the end of the games. Doves are also usually released, which CBS Sports notes is a "method of signaling a country's victory" and goes all the way back to the ancient games.

There is also a flag bearer for each country, who enters first carrying their nation's flag. For example, Entertainment Weekly reports this year Erin Hamlin, the first U.S. athlete to win an Olympic single luge medal (she took home bronze at the 2014 Winter Olympics in Sochi, Russia) and the first woman to win a world championship in luge will serve as the 2018 Winter Olympics U.S. flag bearer. She was chosen by her fellow U.S. athletes and Hamlin told NBC (via EW) about the recognition, "It was a pretty big shock, but it is an honor and a privilege to be recognized by all of team USA."

Speaking of Team USA, they will once again be sporting customized uniforms for the opening and closing ceremonies. This year, Ralph Lauren has designed Team USA's uniforms. According to The Los Angeles Times, this is Lauren's sixth time creating outfits for Team USA.

What makes the 2018 red, white, and blue designs even more special this time around is that they include heaters. According to CNN, the parkas have hidden heating components made out of carbon and silver ink printed on the apparel that are controlled by a slim battery pack. There is a high or a low heat setting, as well. The heaters last up to five hours on the highest setting and 11 when on the lowest setting. CNN reports that during the closing ceremony, the U.S. athletes will wear heated bomber jackets instead of parkas.

As for the closing ceremony, well, it marks the end of the games. One last time, athletes from each country will walk around celebrating the medals they won and the fact that they were part of such an important international event. However, according to the IOC, unlike the opening ceremony, the athletes walk out in no particular order. There is also a victory ceremony and athletes of a certain event will be presented with medals.

According to the IOC, to mark the transition from one city to the next, there is even an "artistic segment" lasting for eight minutes devoted to the next host city. What really marks the end of the games is when the Olympic flame is extinguished.

You can check out the opening ceremony of the 2018 Winter Olympics on Friday, Feb. 9 at 8 p.m. on NBC when it airs or you can stream it live on the NBC Sports website or app at 6 a.m. ET. The closing ceremony is set for Sunday, Feb. 25.

To learn more about each, you official Olympic fact sheets are available for the opening ceremony and the closing ceremony.