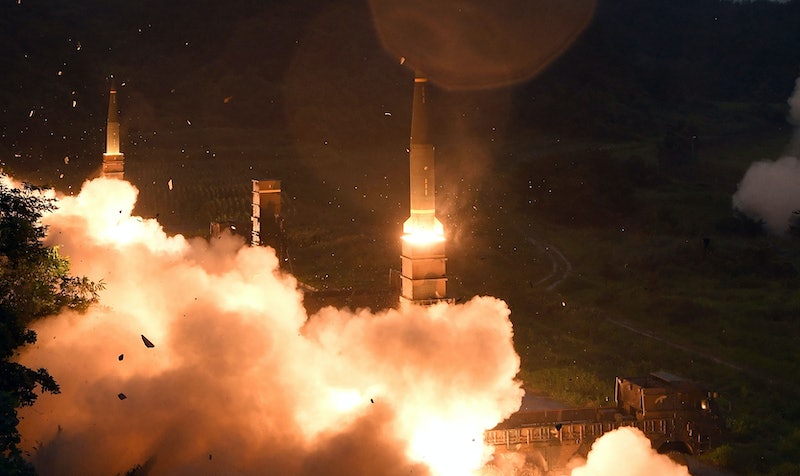 If you were to listen to only North Korea, it would sound like nuclear war here in North America is imminent. The North's Korean People's Army threatened to "turn the U.S. mainland into the theater of a nuclear war" in response to President Trump's threats of "fire and fury like the world has never seen." But neither Trump's nor North Korea's hyperbolic language will tell you what the real threat level is. So, one "private intelligence organization" called the DEFCON Warning System attempts to do it for you.

The organization, like the military, has decided to use DEFCON levels to assess the nuclear threat to the country. Being private, there are a lot of caveats to take into consideration, which even they admit:

Our system is designed to be a barometer which will (in theory) see nuclear war coming much earlier than the government will admit. We will then issue a warning which the public can decide for themselves what to do about.

The group has been quoted by British tabloids like The Daily Star and Express saying that the DEFCON level has been raised in relation to North Korea. For example, there are articles from April stating that the DEFCON Warning System level had risen to four after North Korea's missile tests that month. It was then lowered back to five in June.

The latest report on the website shows that the DEFCON Warning System level was DEFCON level five, but that was back on Aug. 1, before Trump started his blustering. Since then, the organization has posted other articles on the tension between the United States and North Korea, but the threat level doesn't seem to have changed.

It's very important not to confuse this with the real DEFCON rating. It was developed by the Joint Chiefs of Staff and is short for "defense readiness condition." The system lets everybody in the military command know how big of a deal a nuclear threat can be, and what the military's level of readiness should be. The Chairman of the Joint Chief of Staffs decides the DEFCON levels, from five to one (one is the most severe) to tell everyone else in the military what to be prepared for.

DEFCON level five would be normal readiness, whereas DEFCON level one would mean imminent nuclear war. The country has never been below level two. Threats were highest (and DEFCON levels lowest) during the Cuban Missile Crisis and Persian Gulf War.

Because it is military officials that decide the official DEFCON level, it is not something you would normally know as a civilian going on about your daily life. Military personnel would be aware of the level on their own base, but that's about it.