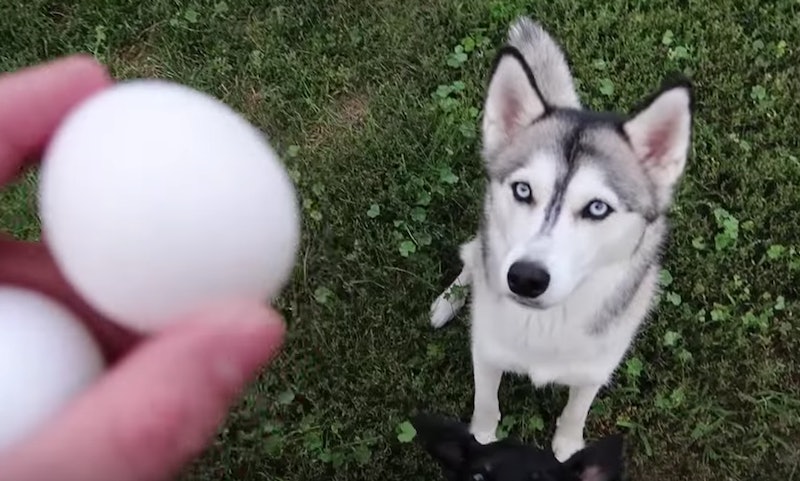 Bath salts and Tide Pods had all of us screaming, "STOP PUTTING THINGS IN YOUR MOUTH," as video after video sprung up on YouTube of daring youngsters ingesting things they shouldn't. They'll have to step aside, though, because there's a new viral video taking over; and like the others, it won't land anyone in the hospital. As shared by Mashable and other outlets, dogs are doing the "egg challenge", and it might be the cutest thing you see all day.

The "egg challenge" is simple. You see if you can place an egg in your dog's mouth, and get them to hold it there without breaking it, testing how gentle their jaw is. This obvi won't work with a chihuahua; but bigger breeds with the adequate jaw size should be able to manage. If you think humans are ridiculous for encouraging this, that's because we are; but if it comes down to an egg and a Tide Pod, give me the egg, all day.

While it appears people are doing the egg challenge with raw eggs, if you want to be super cautious, you could use a hard-boiled one — although some professionals, according to Dogs Naturally, will argue raw eggs are safe for dogs, and possibly even more nutritious than cooked ones.

Either way, one thing's for certain: these videos are too cute for words. Missy nailed it like a pro — twice.

This husky laughed in the face of the egg challenge. Also, look at those teeth.

Pit bulls can get in on the action too; and while they may have gentle jaws, there's no guarantee for the same delicateness when they drop the raw egg on the floor.

Athena not only won the egg challenge, but she did it while playing dead, too.

Watson refused to let a tiny jaw stop him from acing the egg challenge. He grabbed hold of it and ran off to his bed, presumably to enjoy a little snack.

Archie tried to complete the challenge but wasn't quite able to get there. But let's talk about that snort. How adorable is that snort?

While the egg challenge is sweeping the internet, Mashable reported that it all started with the Twitter account @laurdreyfuss, whose aunt read online that a golden retriever has a mouth so gentle, they can hold an egg without cracking it. So, that's exactly what they tried. The dog held on to it without breaking it... and then didn't want to give it back. It's the greatest minute and five seconds ever.

The tweet has collected hundreds of thousands of likes and retweets and has inspired dog owners everywhere to try it themselves.

It turns out @laurdreyfuss's aunt might have been on to something. According to Dog Discoveries, golden retrievers are historically gun dogs that were initially bred to bring back game to their hunters (typically birds). This was why they needed to have soft mouths — so that they could gently pick up the bird and return it to the hunter without their teeth damaging the meat. Dog Discoveries point out that while this is largely due to the breed's nature, nurture also plays a huge role. Thus, one cannot assume all golden retriever's will be champs with the egg challenge.

There's one more reason golden retrievers might be more inclined to successfully complete the egg challenge: they are very easy to train and eager to please, says Healthy Pets. They're a reliable breed and aren't afraid of hard work — this is why you frequently see them as assistance and search and rescue dogs. It makes sense then, that even if they don't get it on the first try, a retriever could perfect their egg challenge game pretty quickly.

While retrievers are special in their own right, all dogs are beautiful and unique! Are you going to try the egg challenge with your pup?