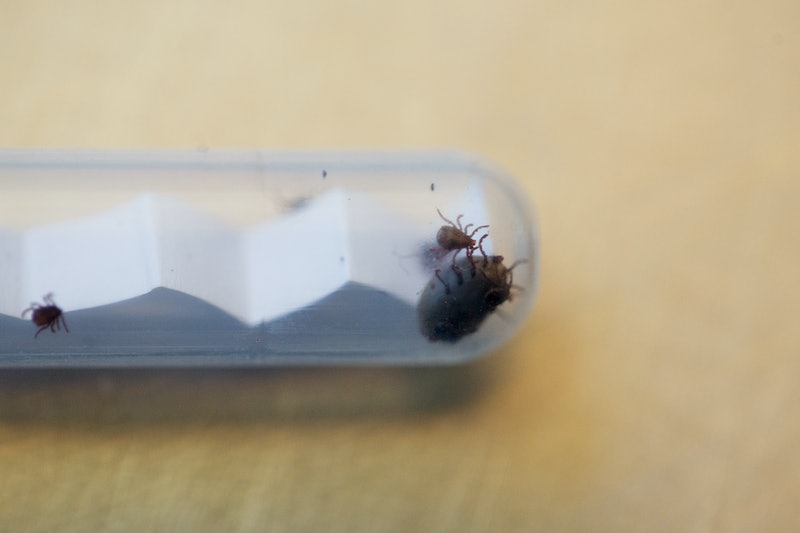 It's summer and that means that the weather is giving us permission to wear our shortest shorts while taking advantage of these long days. The outdoors are calling. But a walk in the park with friends could invite the uninvited: Namely, ticks. And while you probably don't want any ticks tagging along on your adventures, you absolutely don't want the Lone Star Tick to tag along. What is the Lone Star Tick? Basically, its a pest the size of a speck that can cause a lot of bigger problems. This summer, between hikes and picnics, you might want to check yourself for these creepy crawlers to avoid the risks they pose to your health — and barbecues. Really.

There are various species of ticks that bite humans. All are rude. But the Center for Disease Control regards the Lone Star Tick particularly as, "a very aggressive tick that bites humans." This natural nuisance is found in the "southeastern and eastern United States," meaning that the it's not actually named after the Lone Star state — Texas. Instead, the tick gets its name thanks to a a white dot that can be found on the female's back. Which, hey, at least there's an identifier to help zero in on what a bite could mean if you catch one crawling on — or dare I say clinging to — you.

These ticks love a good wooded area and are attracted to most animal resting grounds. Anywhere deers, coyotes, dogs or cattle roam is where you might be exposed to these little blood suckers. While you're engaged in an enchanting woodland Instagram photoshoot, you may be also dealing with minuscule photo bombers. According to Tick Encounter, these pests can be found "on tall grass in shade or at the tips of low lying branches and twigs." So choose your summer frolicking carefully. Or, at least, check for ticks after a photogenic magic-hour stroll through the meadow. Because these vermin are really clingy.

As Tick Encounter continued, "where abundant, nymphs seemingly swarm up pant legs and can become attached in less than 10 minutes. Nymphs typically take five to six days to become replete, and once fully engorged, they fall off of the host into the leaf litter, where they molt into adults." Swarm?! Attached?! Engorged?! That's not exactly the vibe I had in mind for summer. Unfortunately, the reality is that we have to co-exist with these creepy crawlers on our serene camping trips. And so it's responsible to know the health risks they pose.

According to Idea Stations, a University of Virginia study shows that a bite from the Lone Star Tick could lead to a risk for heart disease. Idea Stations reported, "A new study ... is very cautiously linking an allergen in Lone Star Tick bites to an increased risk of heart disease. Bites from the tick can lead to an allergic reaction to red meat and eventually to swelling and hives." Oh, yeah, you also might become allergic to burgers if bitten to this tick because apparently nature can sometimes have a thing against summer barbecues.

It sounds like a fraudulent accusation against a measly little tick, but the development of a red meat allergy is actually a thing. Popular Science breaks it down by writing, "what you really become allergic to is a carbohydrate called galactose-alpha-1,3-galactose." This is found in "mammalian cell membranes." So, red meat. If you experience hives and symptoms of allergies after scarfing down a hotdog on the 4th of July, it might be because of a Lone Star Tick bite.

As our wardrobes transition from down jackets to tank tops, it's crucial to acquaint ourselves with the very real existence of ticks. The Lone Star Tick will bite. And because it could make you allergic to barbecues, stay conscious to what's around you as you play outdoors. You could be leaving the woods with way more than a picture for Instagram.