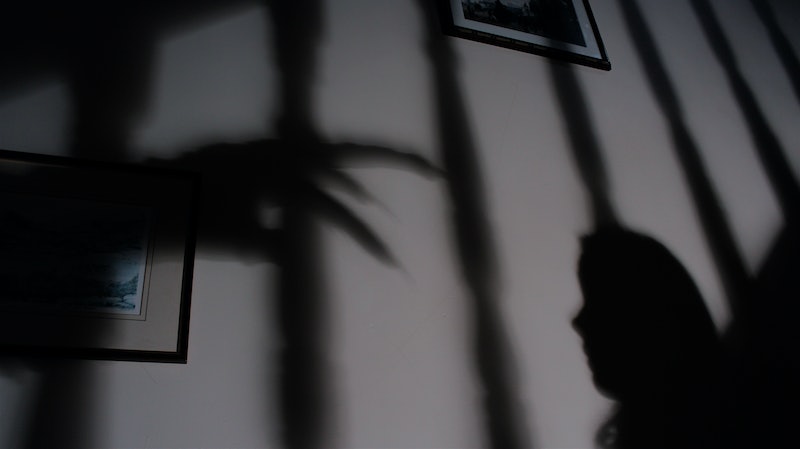 Perhaps your introduction to the boogeyman, like many kids, was via watching reruns of Halloween that played on TV every October. (In case you don't remember, the film included a scene in which lil' Tommy used the term to make sense of the terrifying Michael Myers.) Or, maybe it was because dark rooms are scary! Either way, as a kid, it's hard to escape the fear that something might be lurking under your bed or behind the open crack of your closet door as you try to fall asleep. But what is the boogeyman, exactly? Like, where did the story even come from? Trying to define it off the top of your head is weirdly difficult — it seems to have no real consistent shape or form, but rather just represents some elusive entity who comes out in the dark and is, obviously, deeply scary. If you're wondering about the original boogeyman, well, like many creepy things, this monster has its origins in folklore.

Folk stories and fairy tales, creepy and dark as many of them are, have been used for centuries as a way to teach children morals, keep them in line behaviorally, and enforce the societal status quo. They usually serve as metaphors for larger ideas that are formulated into catchy stories that grab kids' attention. Thus is the origin of the boogeyman, as well. Sometimes spelled "bogeyman," this specifically non-specific type of monster appears in folklore around the world, and has for ages. You may have even heard it called by some of its other names: Krampus, El Coco, Old Hag, and Baba Yaga, to name a few. "Almost every culture seems to have their own version of the creature," explained Destination America on its site, "but one tie that binds is the use of the story ... as a tool to scare children into behaving." Yep, that's right — this haunting, elusive creature, pervasive throughout both horror movies and our own childhood memories, has its original roots in parents just trying to keep their kids in check.

The word "boogeyman" is thought to be derived from the word "bogge" which means "hobgoblin" in Middle English, and the legend surrounding it may have originated in Scotland, although it's not totally clear. There are reported references made to the boogeyman monster as early as the 1500s, although it's suspected the concept already existed in folklore long before that. It's nearly impossible, though, to pin down the monster's exact origins. "Because the boogeyman has such a large global impact, it is difficult to determine which country told the first tales of this monster," wrote Mythology.net. "One thing is for certain – the boogeyman loves to lurk in the shadows of the night and its main victims are disobedient children who don’t listen to their parents."

While the original boogeyman proves to be as difficult to define as who the monster is today, the mythology surrounding it is consistent cross-culturally. "The Bogeyman is there is to ensure that we follow the rules," explained Scientific American. "[It's] shapeless so it can be anywhere at any time, whether that means lurking under the bed or in the closet or behind a tree in the forest." What's both fascinating and terrifying about the boogeyman is that it has no defined, agreed-upon appearance. While everyone knows the term, no one has a clear idea of what it looks like, which sets it apart from other mythical monsters, who are generally defined by physical traits. This means that the boogeyman, while typically thought of as masculine, could take on any (or no) gender. It could live in your house or at a friend's house. It could walk through walls or hide in your closet. As the House Of Monsters put it, the boogeyman is "just a formless personification of terror." It can be anything the fear in your mind makes it out to be.

While a boogeyman's main thing is terrorizing children, it apparently does so in many different ways, depending on the culture. In America, the myth typically has the monster lurking under beds and closets. I was a neurotically anxious child, so thankfully my parents knew better than to make things worse by threatening me with made-up monsters (I was already too busy worrying about burglars, diseases, and being abducted by aliens — go figure). But somehow, the boogeyman-esque concept of being unreasonably afraid of all under-bed and closet areas of my bedroom in the dark certainly made it into my psyche anyway. Everyone has fears. And when you're a kid and it's hard to make sense of them, the boogeyman serves as a personified version of them, one that you can hide from and potentially escape — which is perhaps why this creepy myth has stood the test of time.

More like this
Heinz Just Relaunched A Bean-Tastic '90s Fave
By Sam Ramsden
44 Impressive Secret Santa Gifts That Won't Break The Bank
By Sadie Trombetta and Lauren Grant
32 Cheap Gifts For Your Bestie That Go Beyond Basic BFF Necklaces
By Emily Kelley, Mia Mercado and Brittany Leitner
These ‘Love Actually’ Plotlines Are “Out Of Date,” According To Director Richard Curtis
By Grace Wehniainen
Get Even More From Bustle — Sign Up For The Newsletter