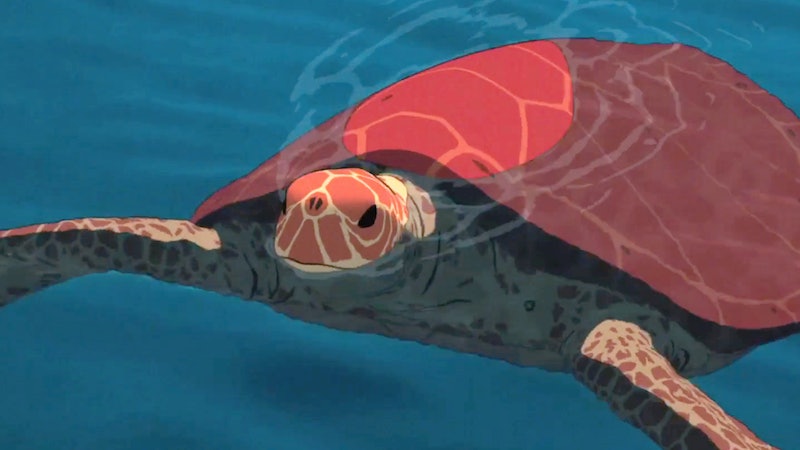 Hear ye, hear ye. The Oscar nominations have finally been revealed. So, you know what that means, don't you? That we are now introduced to a slew of incredible yet previously (somewhat) unknown films. For example, what is The Red Turtle? Oh, no big deal. It's just happens to be one of the Academy Award nominees for Animated Feature.

First things first. You might be asking yourself, "Is it a film about a red turtle?" And, the answer would be, "yes." And also, "no." According to Metacritic, "Through the story of a man shipwrecked on a tropical island inhabited by turtles, crabs and birds, The Red Turtle recounts the milestones in the life of a human being." But, while the human being is the main character, it's the red turtle that's deserving of the title because he's the catalyst of the man's journey.

As Rolling Stone asserts, the man puts together a raft out of bamboo and takes it out to sea in order to get off the island. But, when he takes it to the ocean to sail it, something keeps damaging the raft and stops him from succeeding. They go on to explain that his raft "nemesis" ends up being a, "giant red sea turtle." As per their review, the man kills the turtle in frustration, and after his shell breaks, it's then that the movie, "Fully [enters] Hans Christian Andersen territory," citing the famous fairy tale author.

Other things about the film to note? As per Variety's otherwise overwhelmingly positive review, The Red Turtle is a film that, "Some will find to be the longest 80-minute movie they’ve ever seen." Which could be mainly attributed to what it and Rolling Stone point outs — there isn't any talking.

The Red Turtle "resists imposing any sort of literal 'meaning,' leaving the material open to interpretation," as Variety explains. So, if you were looking for a fairy tale that's atypical and not too on the nose, this film might be for you.