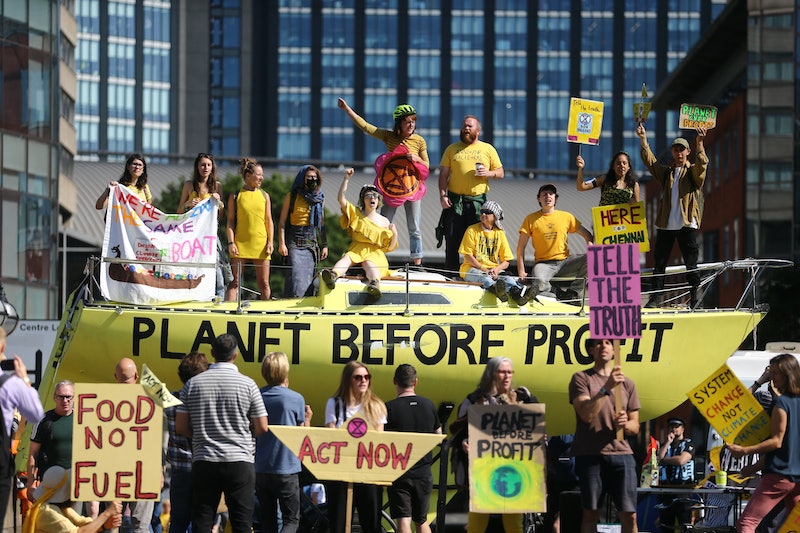 The UK Parliament may have declared a climate emergency, but words are not enough to prevent global catastrophe. That's the message behind climate group Extinction Rebellion's newest protest. Dubbed the Summer Uprising, the five-day long disruption saw the group's "rebels" take to the streets of five UK cities: London, Glasgow, Cardiff, Bristol, and Leeds.

Beginning on July 15, the week saw groups of protesters take over a number of areas with large boats blaring the message: "Act now." The locations were chosen deliberately as a "creative act of civil disobedience" and aimed to disrupt working days as well as to educate people on the current environmental situation. Each highlighted a different aspect of the climate crisis. Leeds honed in on the finance industry, London called for ecocide to be made a crime, Glasgow demanded justice for climate refugees, Bristol raised awareness of rising sea levels, and Cardiff urged for action over the sixth mass extinction.

In Leeds, people set their sights on the financial district, reports the Evening Standard. Cardiff City Hall and London's Royal Courts of Justice also witnessed protest action. The latter was targeted for its role in the prosecution of over 1,000 activists who were arrested during previous protests.

Those protests occurred in the capital in April and lasted for a grand total of 11 days, blocking high-profile areas such as Oxford Circus and Waterloo Bridge. As the Independent reports, police said they would not allow a "large-scale protest" like that to happen again.

But Extinction Rebellion spokesperson Rupert Read told the paper that it's not a matter of whether the police allow future action. “When masses of people take non-violent direct action, the matter is no longer entirely in the police’s hands," he said. "If and when 10,000 people sit in a street and refuse to be moved, then what the police will ‘allow’ is neither here nor there. There aren’t enough of them to arrest us all and when they arrest some of us, others take their place.”

Fewer people appear to have been arrested this time round, but the movement's message was still heard by media and law enforcement, particularly in London. On Friday, activists embarked on a "die-in" protest outside newspaper offices in London, calling on editors to make environmental concerns a top media issue, reports the Independent. Per the Guardian, police responded to several London-based protests such as this by banning campaigners from using boats, vehicles, and other structures during the final day of the Summer Uprising.

Although effective and accessible to various age groups, Extinction Rebellion hasn't escaped criticism. The entire movement has been described as a symbol of white, middle class privilege for relying on disruptive strategies that usually signal a large police presence. Location choices were condemned by one man, reports the Guardian, who was unable to get to hospital before his father died due to protesters blocking a main road in Bristol.

"It is with deep regret that we hear of the serious emotional impact on several individuals caught in traffic resulting from one of our protests in Bristol," a statement from Extinction Rebellion read. "We would like to apologise and we will be making a full review of events yesterday to minimise the risk of this being repeated in the future.”

Despite this, the movement is showing no signs of slowing down. As The New Yorker reports, future action includes a protest where campaigners will refuse to pay taxes until the government "enacts more urgent environmental policies" and "high-risk, high-sacrifice" scenarios such as shutting down Heathrow Airport.

These plans may be inaccessible to many, but, with the right planning, Extinction Rebellion's upcoming international protest may not be. Starting Oct. 7, the rebellion is reportedly going to span "cities, countries, and continents," resulting in a similar, if not bigger, result to April's London-based protest.

Whether you want to join the group or push for climate action in your own way, it's clear that there's a need for some form of activism. Because right now, all politicians seem to be doing is talking. And talking won't get humanity out of this planetary mess.

More like this
Pret & Costa’s Coffee Is The Strongest On The High Street, According To Which?
By Sam Ramsden
Gen Z Are Twice As Likely To Identify As Queer, According To New Data
By Sam Ramsden
8 Charities To Donate To During Black History Month
By Alexis Morillo
Twitter Has *A Lot* To Say About The "Single Penalty”
By Sam Ramsden
Get The Very Best Of Bustle/UK
Sign up for Bustle UK's twice-weekly newsletter, featuring the latest must-watch TV, moving personal stories, and expert advice on the hottest viral buys.