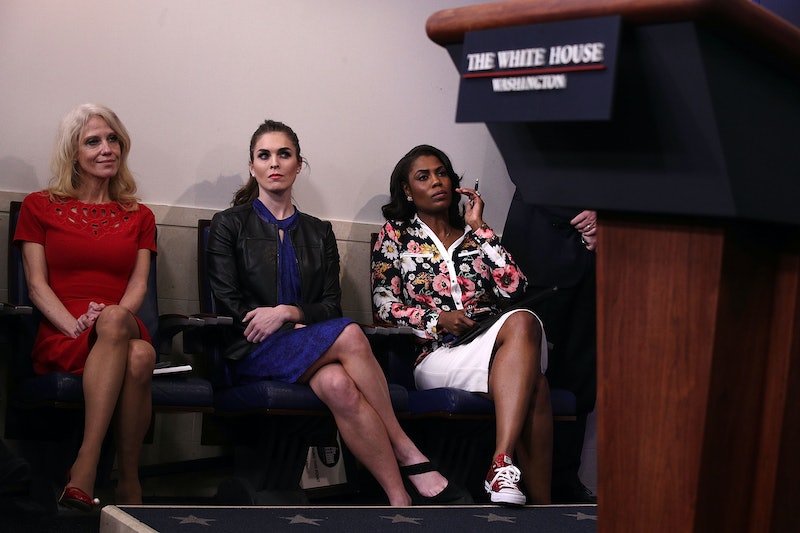 Tuesday, April 10 marks Equal Pay Day, a day of advocacy that symbolizes how much time women must work into a new year before they make the same amount that men did on average the previous year. While you'd think that the White House would be immune to the equal pay issues that plague many other organizations, the truth reveals something quite different. In fact, the White House wage gap is surprisingly substantial.

Last year, the American Enterprise Institute (AEI), a conservative organization, conducted a gender analysis of White House salaries after the salaries became publicly available on June 30. In his analysis, Mark Perry, a scholar at AEI, found that a variety of news organizations had been underreporting the wage gap, saying that there was a gender pay gap of about 20 percent in Trump's White House. However, as Perry noted, this figure is misleading because it was calculated using average salaries, which can be skewed by outliers, and does not necessarily reflect the true gender wage gap at the White House.

Instead, Perry used median salaries to calculate the gender wage gap — a strategy which, according to him, is more readily used by research organizations calculating wage gaps. He found that in 2017, the pay gap between men and women working at the White House was nearly 37 percent. Indeed, the median salary for women was $72,650, while the median salary for men was $115,000.

While 2018 salary figures for White House employees are not yet available, the exodus of many of the Executive Branch's highest paid female employees this year has likely done little to diminish the pay gap. The maximum salary a White House employee can make in their role is $179,700. In 2017, six women — Omarosa Manigault, Lindsay Reynolds, Kellyanne Conway, Kathleen McFarland, Dina Powell, and Hope Hicks — were listed on the White House personnel report as making this salary. The report also indicated that 16 men made the top White House salary.

The White House will likely provide an updated report on employee wages this summer, since Congress requires the Executive Branch to submit an annual report on White House employees. However, it seems unlikely that the White House's gender wage gap will close much in 2018, especially considering the exodus of several prominent female White House staffers in recent months.

Thus, as Equal Pay Day approaches on April 10, the White House gender pay gap serves as a sobering reminder that pay inequality is a significant problem in all places, including the White House.