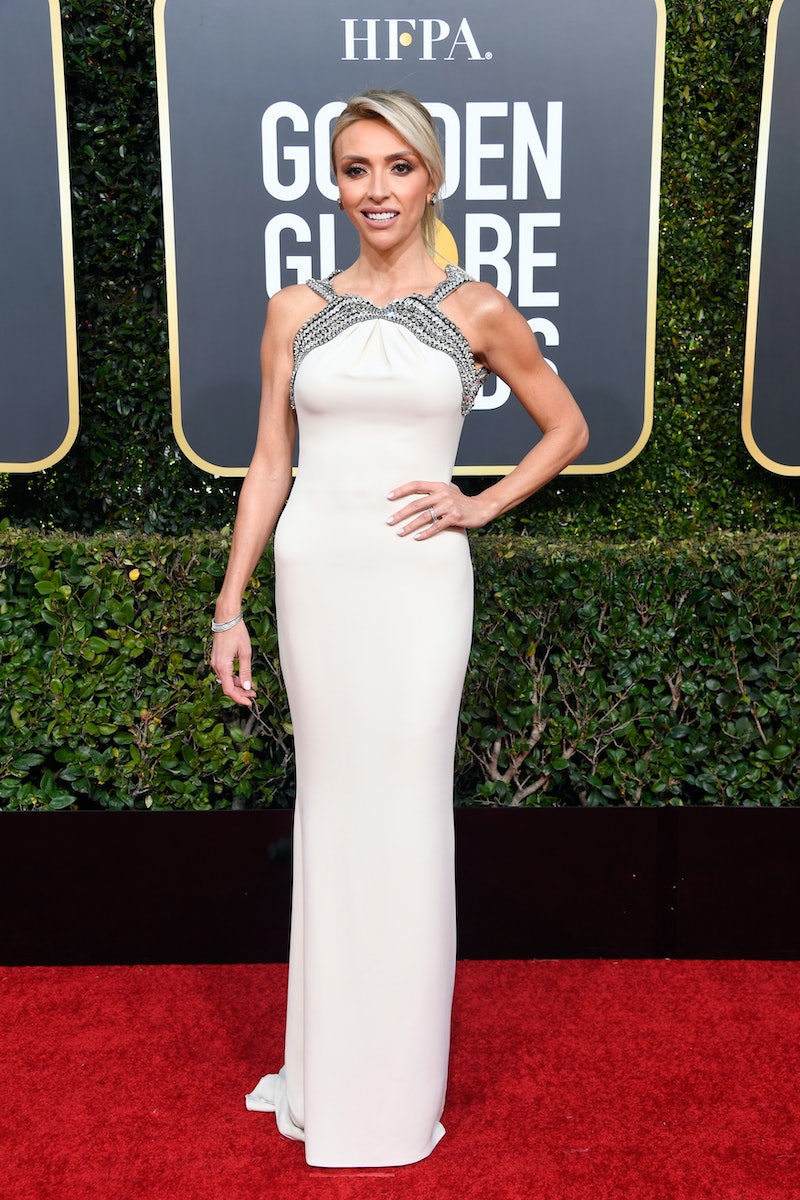 The Golden Globes' red carpet was a hot spot for the Time's Up movement last year, and that momentum has not slowed. Some stars, including E! host Giuliana Rancic, are wearing bracelets with a similar, yet slightly different message at this year's ceremony. So what is Time's Up X2?

According to the official Time's Up website, Time's Up X2 is meant to build upon the original movement, which was launched in 2018 in the wake of multiple allegations of sexual misconduct against powerful men in Hollywood. In addition to its focus on ending sexual harassment and discrimination in the workplace, Time's Up X2 now aims to "double the number of women in leadership and across other spaces where women are underrepresented."

"We learned a lot in 2018. First, there is safety in numbers. Second, there is strength in numbers," the Time's Up website reads. "And finally, everything will change when we have more women, especially women of color and women from other traditionally underrepresented groups, making decisions. Period." According to Variety, the Time's Up Legal Defense Fund has helped about 4,000 men and women who have dealt with sexual harassment or assault at work with legal resources, and only hopes to continue from here.

According to The Hollywood Reporter, the Time's Up X2 bracelets arrived "without advance notice" on Friday, so those who wanted to show their support had to work quickly to incorporate the bracelets into their ensembles, but many celebs made the time. Handmaid's Tale star Yvonne Strahovski told Ryan Seacrest on the E! red carpet broadcast that Time's Up X2 is "inspiring women to move forward into positions where we haven't been able to before."

Regina King's son, Ian, also told Seacrest why he chose to wear his Time's Up pin this year at the Globes. "Just for women having equality and safety in the workplace, and all individuals... that's really important to me, especially having a powerful woman [as a mom]," he said. "They rule the world. And to see them not be safe in the workplace is just terrible."

The reminder of Time's Up comes at a particularly poignant time — supporting survivors of alleged misconduct has been at the forefront of people's minds this week amid the airing of Lifetime's Surviving R. Kelly. And the solidarity shown at last year's Golden Globes isn't lost on on anyone, either. Reese Witherspoon shared a throwback photo earlier today celebrating the 2018 ceremony. "Good luck to all the nominees tonight!" she wrote. "And may we continue to celebrate risk takers in our industry and beyond."

It's encouraging that the movement is still going strong one year later, because despite the progress that's been made, the entertainment industry still has a long way to go in holding perpetrators accountable.

"Together, we actually moved the resistant needle on the world receiving our voice," Time's Up's website states. "Suddenly, finally, there was acknowledgment and a willingness to believe women's accounts of unthinkable crimes against them. And new standards of accountability were brought into focus, even for powerful men who had long seemed untouchable."

As the night goes on, it seems likely that more and more celebrities will be sharing their feelings about the movement, and why so many have chosen to lend their voices to it.

More like this
Emma Corrin Spoke Out Against “Clickbait” Headlines Surrounding Gender Conversations
By El Hunt
The 'Love, Lizzo' Harry Styles Scene Is Just 1 Moment That Made Fans Feel Seen
By Brad Witter
Lindsay Lohan Just Recalled A Hilarious 'Parent Trap' Story
By Sam Ramsden
Will Smith Reflects On "Horrific" Chris Rock Oscars Slap In First TV Interview
By Sam Ramsden
Get Even More From Bustle — Sign Up For The Newsletter