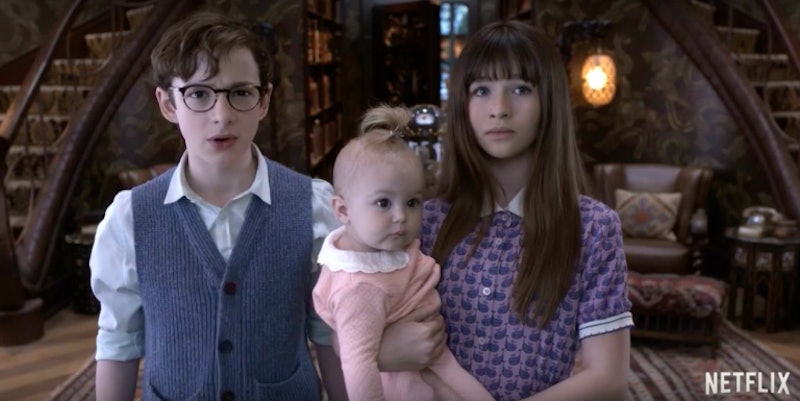 I'd like to have a Very Frank Discussion with all of you. It seems as though Lemony Snicket's A Series of Unfortunate Events will be appearing on Netflix this Friday the 13th, and we've done absolutely nothing so far to stop it. If you remember this series of morose children's books, you might already have a Veritably Forlorn Disposition at the prospect of a whole television show devoted to the unhappy Baudelaire children and their miserable lives. But, before we find ourselves lost in Vastly Fruitless Distractions, let's answer one important question about this so-called Lemony Snicket and his series of books: what is V.F.D.?

You might recall the initials V.F.D. cropping up at the end of The Austere Academy, book five of A Series of Unfortunate Events. As the two Quagmire triplets are being dragged away by Olaf and his associates, they manage to shout, "V.F.D.!" at the confused and distressed Baudelaire orphans. Violet, Klaus, and Sunny are left to try and puzzle out these three letters for themselves. The mystery of V.F.D. leads them to move to the Village of Fowl Devotees, join the Volunteers Fighting Disease, and purchase a large box of Very Fancy Doilies.

As the books go on, the Baudelaire children slowly realize that V.F.D. is a vast, secret organization—their parents were members before they perished in a fire, and most of the guardians and villains who the children have encountered seem to be involved in this sinister (or noble?) operation.

And what do the initials V.F.D. stand for in this noble (or sinister?) society?

At least, that seems to be the original meaning behind the letters. V.F.D. is used to name many of the organization's secrets, such as the Verdant Flammable Device, Volunteer Feline Detectives, and Verbal Fridge Dialogue.

This eye serves as V.F.D.'s insignia, often accompanied by the comforting-yet-creepy motto: "The World is Quiet Here."

V.F.D.'s secret activities extended far beyond preventing fires, however. As Captain Widdershins puts it, “V.F.D. isn’t just a fire department. Aye–it started that way. But the volunteers were interested in every such thing!”

Lemony Snicket's Unauthorized Autobiography implies that "volunteers" were taken as children (and carried away by their ankles, of course), to be taught at V.F.D. boarding schools. There they studied up on secret codes hidden in poetry books, proper disguise techniques, deadly mushrooms, and whatever other topics interested them.

That was, of course, before the terrible schism (a word which here means, "the vague backstory that fuels most of the plot"). Before the Baudelaire children were born, V.F.D. split down the middle because of some unknown disagreement. In The Penultimate Peril, Kit Snicket explains that, "V.F.D. was once a united group of volunteers, trying to extinguish fires–both literally and figuratively. But now there are two groups of bitter enemies."

So the once noble organization was divided into the fire-fighting side... and the fire-starting side.

Both sides, however, still use the same strange codes, the same image of an eye, and the same elaborate disguise kits.

So how to tell the two sides apart? Well, if you consider yourself well-read, arrive early to your appointments, and enjoy drinking bitter tea, then you might belong on the "noble," fire-fighting side of V.F.D.

But if you prefer arson, murder, and stealing wealth from children, you might be more comfortable on the "villainous," fire-starting side of V.F.D. Naturally, the fire-starting side appears to have far more allies in the press and the police than the fire-fighting side.

But of course, part of Lemony Snicket's skill as an emotionally distressed author is blurring the line between the two sides.

The Baudelaires, after all, burn down the Hotel Denouement towards the end of the series. And the villainous Count Olaf helps the children when Kit Snicket goes into labor in The End.

So be wary, when choosing your fire-fighting friends and your fire-starting foes. And if a group of mysterious individuals wearing false facial hair arrive to carry you off by the ankles, don't be alarmed. You might be the next volunteer.